Specially selected freeware and videos of flight sims reviewed in the January/February 2020 issue.

As requested by our readers, the complete file set accompanying Issue 125 can now be downloaded as a single zip file. 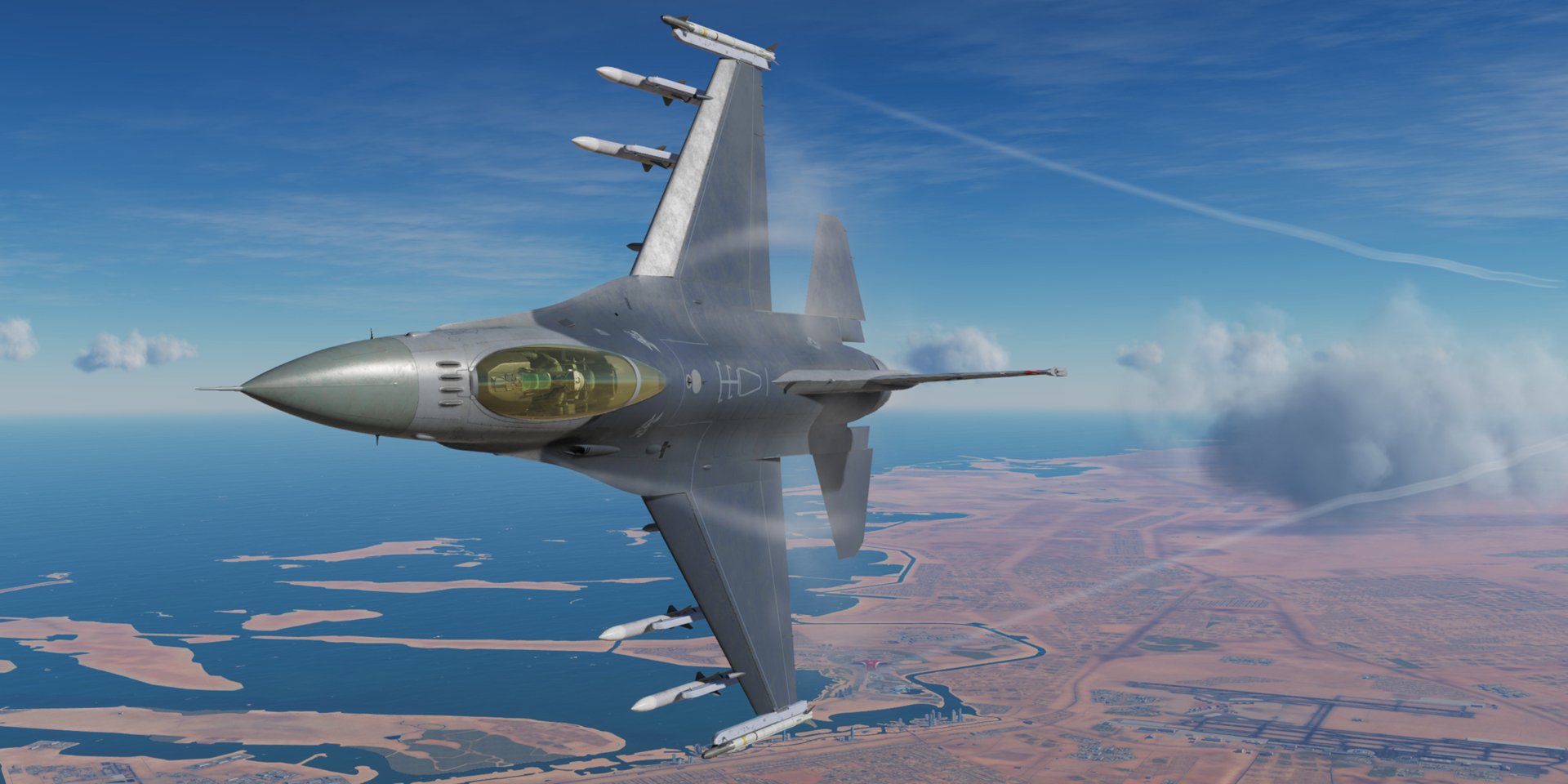 The videos are supplied as links to YouTube links, we are unable to include them in the file due to limitations with file size.

If you are on a low-bandwidth connection, we recommend you download the files individually in the sections below.

As part of its ‘Feature Discovery’ video series which showcases the core features of their upcoming simulator, the Microsoft development team released Episode 3: Aerodynamics and Episode 4: Cockpits. The whole series illustrates the thought process and sheer hard work that has gone into producing this stunning simulation. Here are the links to the presentations:

In our interview with Aerosoft’s CEO, Winfried Diekmann, starting on page 32, we discuss the past 12 months from his company’s perspective as well as the year ahead. Here are three videos which showcase products mentioned in the interview.

As part of our look back at the past year in flight simulation, we spoke to Scott Phillips, Just Flight’s marketing manager (see pages 28-30), and discussed what the last 12 months have been like for the company and how they view the future in this ever-changing industry. With that in mind, here are three videos of products released from the Just Flight hangar in 2019.

This video highlights the beautifully rendered exterior of Carenado’s F50 and the equally exquisite interior details of the cockpit and cabin areas, while the aircraft’s sleek and elegant lines are shown off to good effect. Read our detailed review starting on page 16.

This dramatic and cinematic presentation shows off Eagle Dynamics’ F-16C Viper to good effect. Every opportunity is taken to highlight ED’s attention to detail: from the accurate rendering of the aircraft’s external features to the equally detailed cockpit area. Aerial shots showcase how well ED has replicated the F-16’s distinctive look and lines. Its legendary manoeuvrability and air-to-ground capability is also featured in this video. To read our full report on this stunning simulation, turn to our review starting on page 68.

To accompany our new series on air combat simulation, we thought it would be appropriate to regularly showcase the flight simulations that will be featured in the coming months. On this occasion, it is 1C Game Studios’ ‘IL-2 Sturmovik: Flying Circus Volume I’. Based on their previous Rise of Flight simulation, this is a “re-imagined” overhaul of that highly successful and immersive World War I ‘experience’. This exciting video showcases the ten aircraft currently flyable in Flying Circus.

As usual, the download link below contains the flight plans for FSX/P3D and X-Plane and some Pilot’s Notes with links for additional scenery and aircraft options for different simulator platforms. 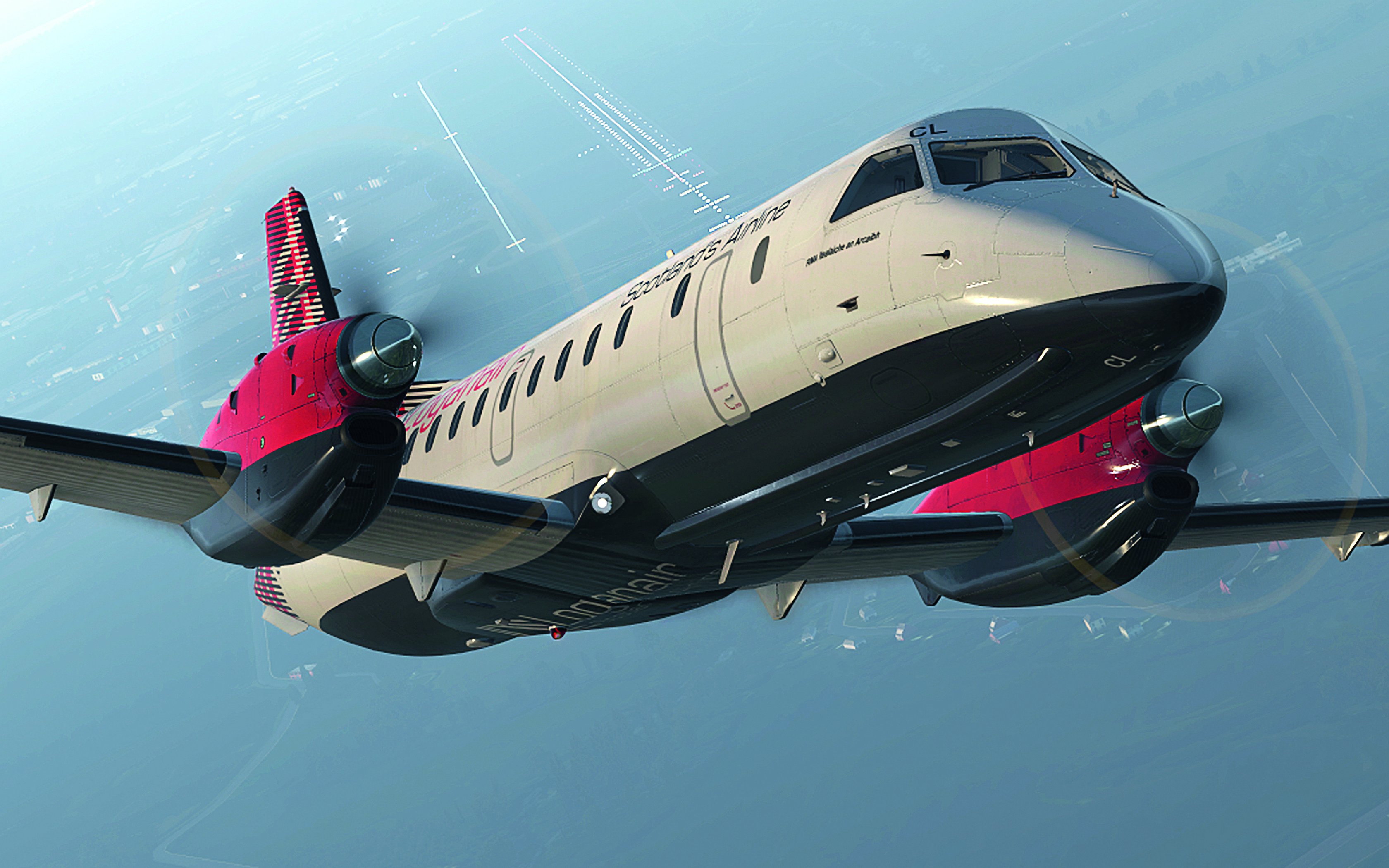 US San Francisco and Klamath Falls Sectional Charts are available from the downloads link below. As an added bonus, the download also includes images of the E6B Flight computer calculations used in this flight to make your introduction a little easier. 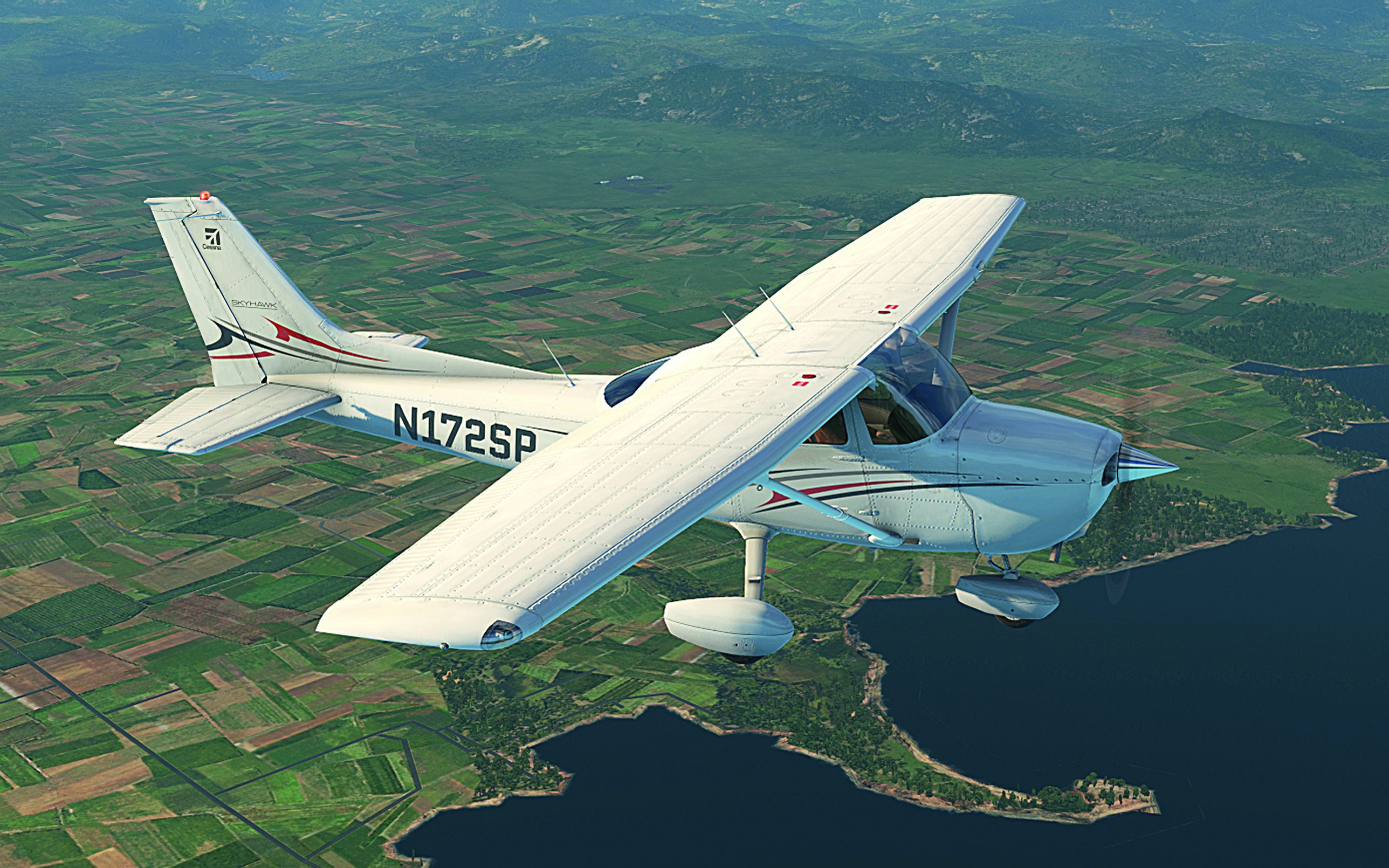 Once again, we have a collection of high-quality freeware files for you to enjoy. These aircraft, scenery and utilities easily compare with many commercial products but don’t forget, if you’ve enjoyed a particular file, please let the author know, it’s their only payback. By the same token, we’re always interested to hear from you if you’ve downloaded or designed a file that you think is worth sharing.

Permission
Although the authors of these files have very kindly given us their permission to include them on our website, they still remain the property and copyright of the authors. You are free to enjoy them for your own use but they must not in any circumstances be distributed, copied, uploaded to any other websites or disassembled in any way whatsoever.

Library files
Most X-Plane users will know that many freeware airport designers make use of Library files to enhance their creations. Consequently, it’s important to read the documentation within each airport to find out which libraries have been used. These libraries need to be installed in order to experience these airports as the authors intended.

Our featured download for this issue is a scenery file; in fact it’s an airport. The airport covers over 1500 acres, has three runways and is the largest airport in the state of Kentucky. It’s also the third-largest cargo hub in the US and the seventh-largest in the world. I was surprised at the vast number of UPS aircraft lined up at many of the gates.

I later found out it’s their Worldport, acting as the main hub for UPS operations worldwide. Louisville Airport is also home to the Kentucky Air National Guard, with maintenance hangars for both Republic Airways and Compass Airways. In addition, there are several GA hangars and a Fixed-Base Operator (FBO) run by Atlantic Aviation.
The version for X-Plane 11 depicted here was designed by StableSystem. They have made a brilliant job of it, recreating everything from the ground up with attention to detail usually reserved for commercial products. Because they’ve made use of some third-party libraries, the airport has virtually no impact on X-Plane’s performance.

I used an airport from this package in my Honolulu review (p.24). The scenery includes all the main airports throughout the Hawaiian islands. They were designed by George Keogh who sadly passed away last year; our thoughts go out to his wife Christine and their family. 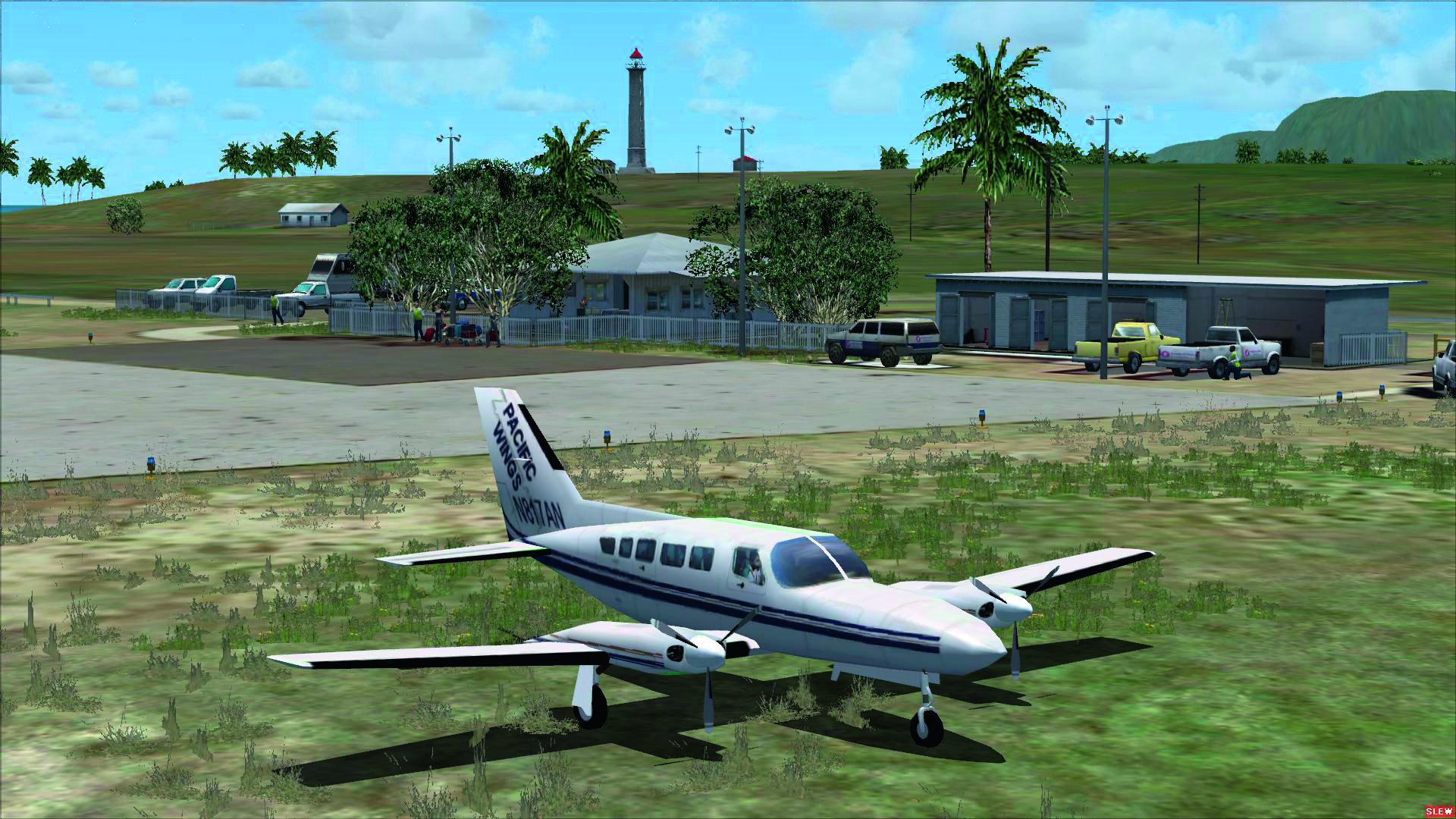 This scenery depicts the region around Frankfurt Main and includes more buildings for the cities of Giessen, Mainz, Marburg, Oberursel, Siegen and others. Designed for X-Plane by Günther Kremp 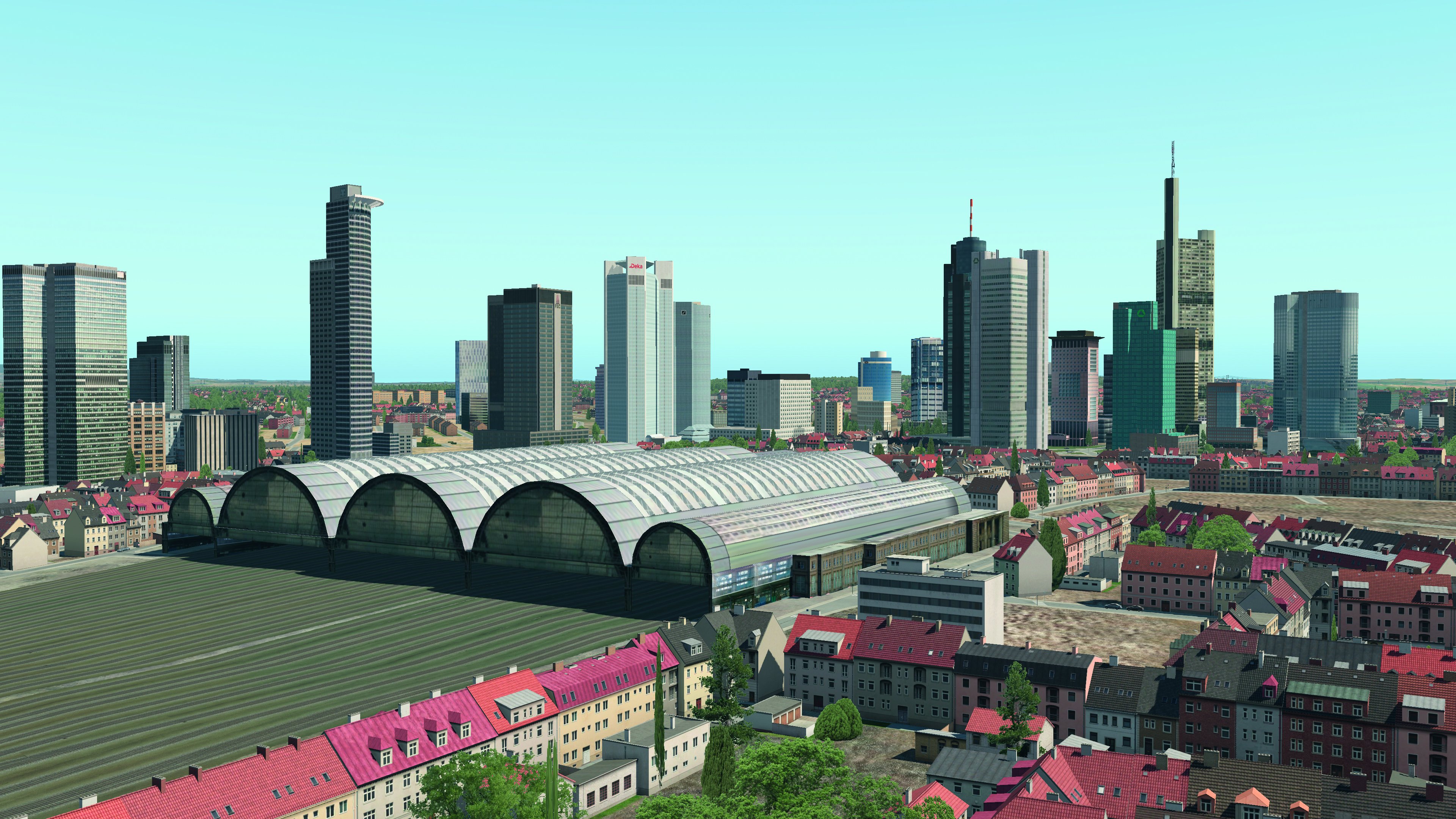 The Falcon 20, initially known as the Dassault-Breguet Mystère 20, made its maiden flight on May 4, 1963. It’s a very smart low-wing monoplane design, powered by twin General Electric CF700 turbojet engines. Designed by Arild Elverum. 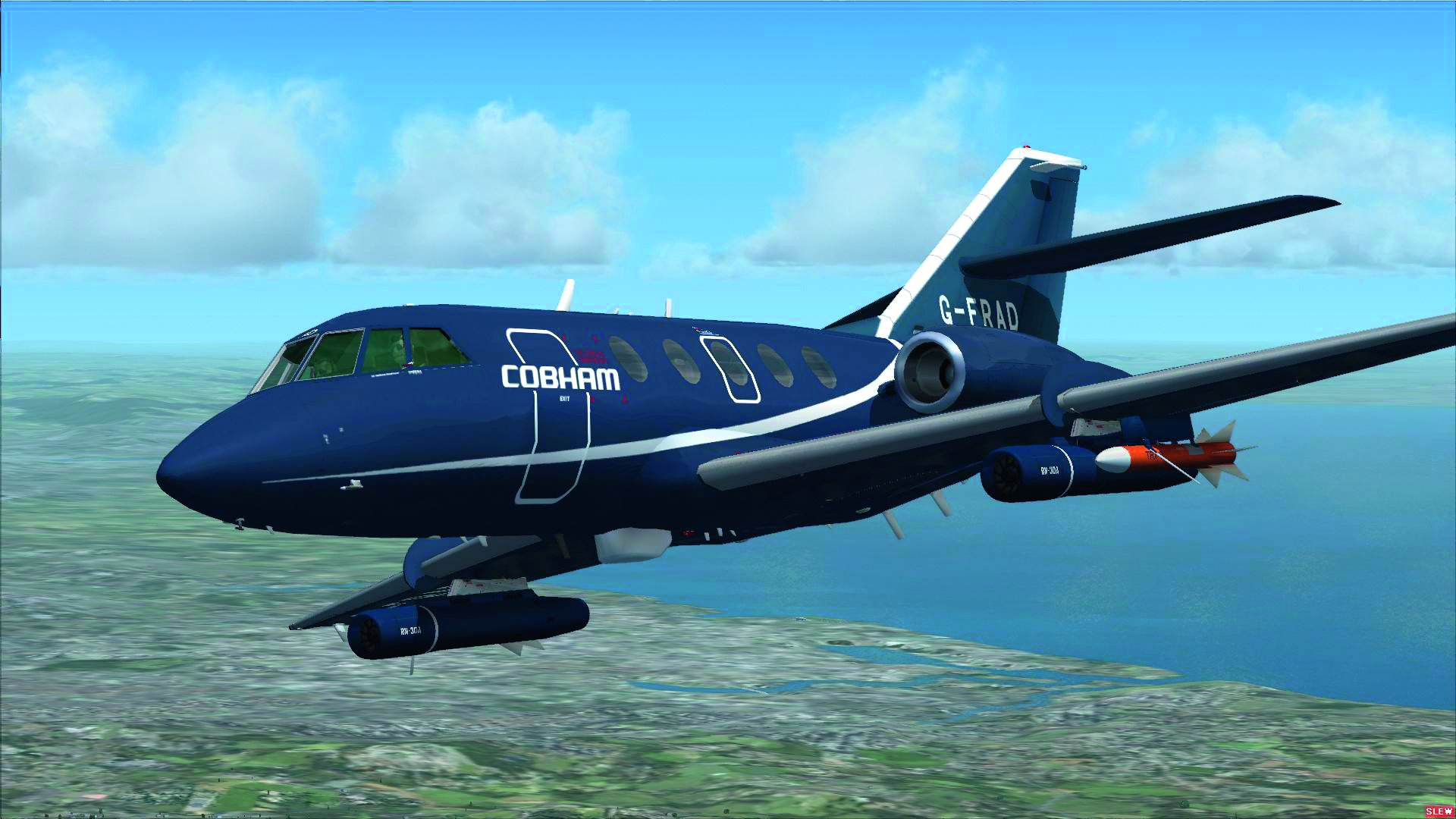 These aircraft were superbly designed for FSX and Prepar3D by Simon Smeiman. They depict two aircraft developed by the Adam Aircraft Industries that never made it into production. It’s a comprehensive package that includes a full-colour manual. 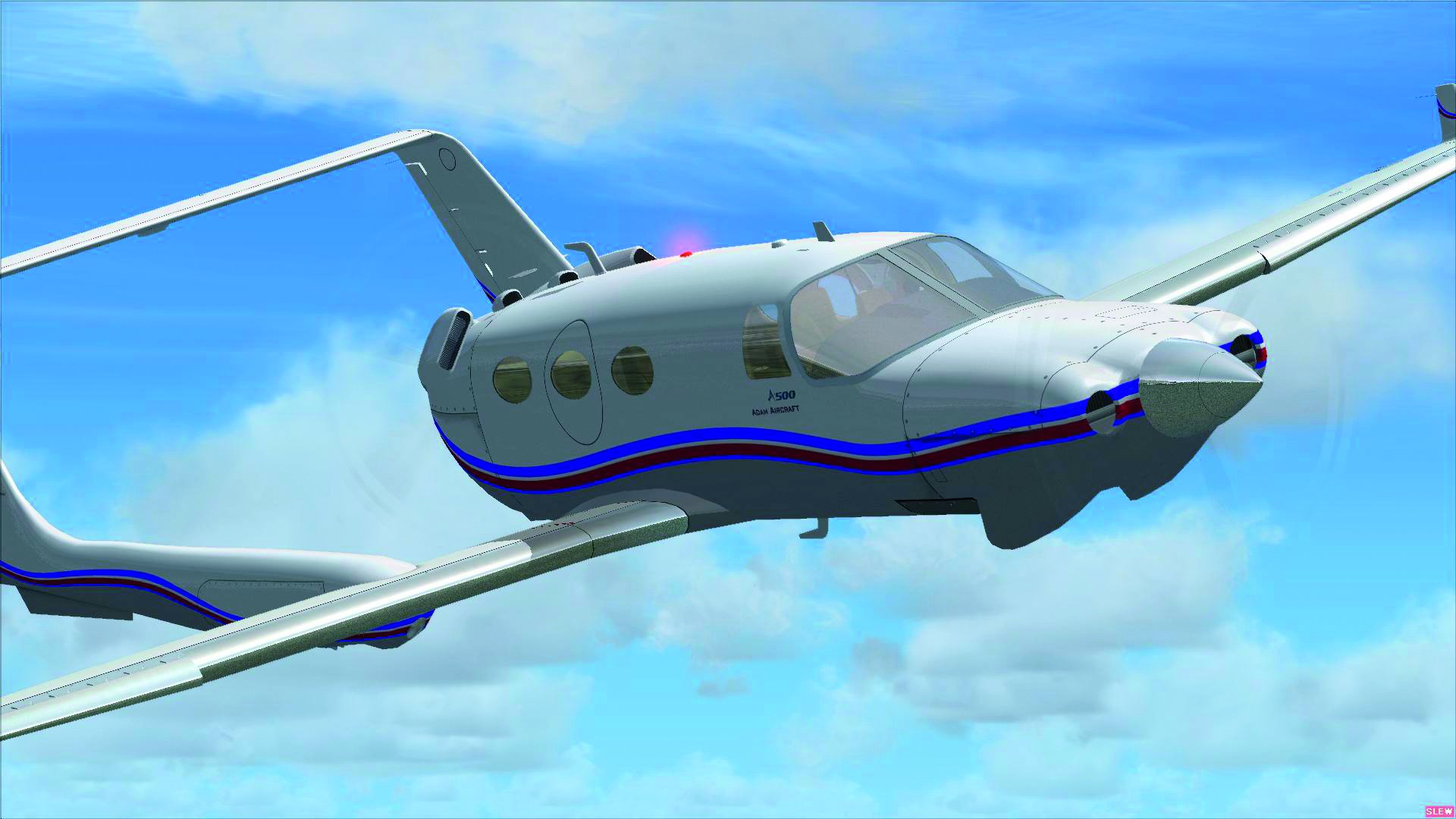 Without question, the F-86 Sabre was one of the greatest fighter aircraft of all time. The aircraft shown here by the prolific AF Scrub depicts the F-86H fighter-bomber variant, which began development in 1951. 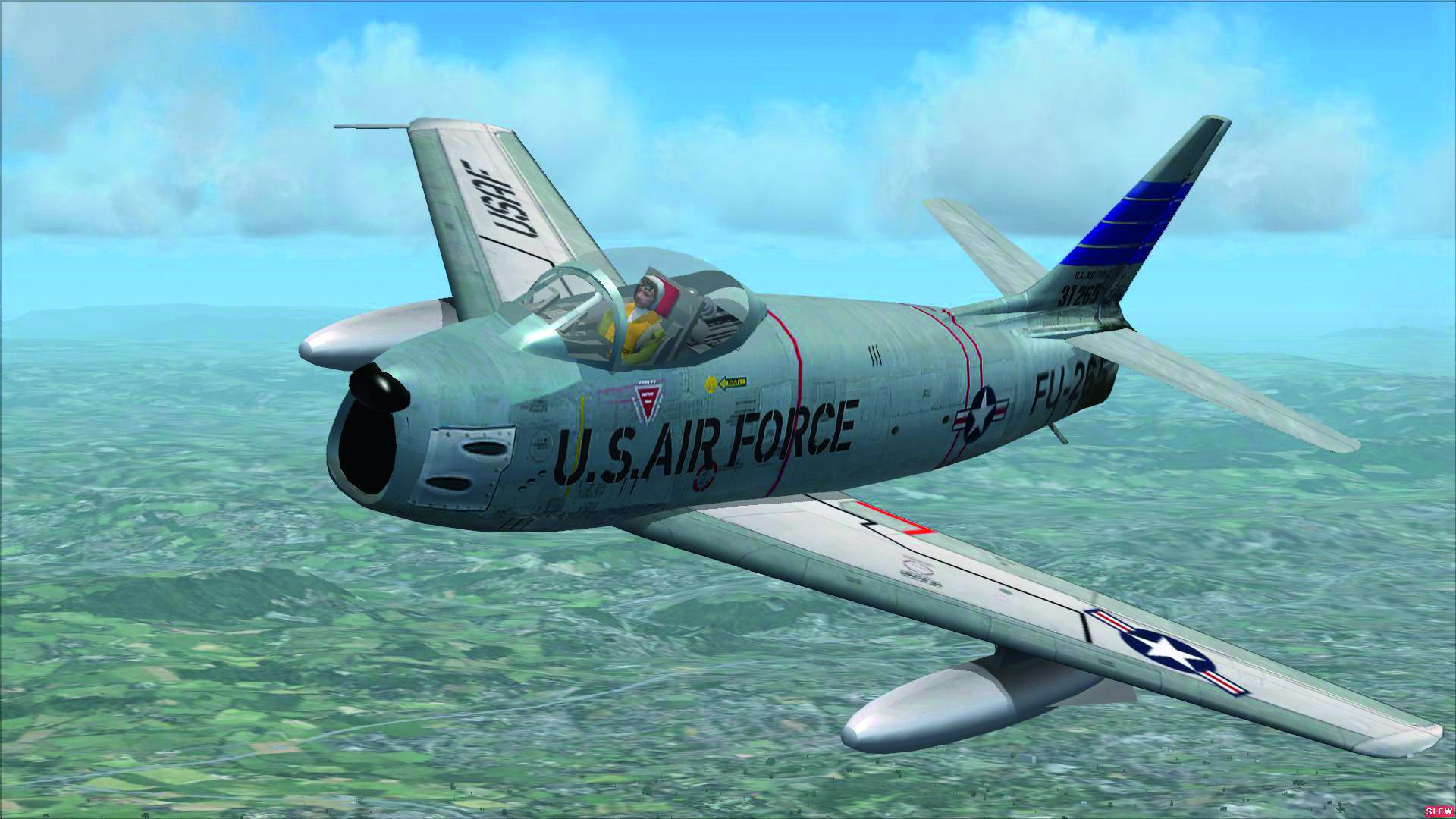 Mariscal Lamar International Airport is a high-elevation airport serving Cuenca, the capital of the Azuay Province in Ecuador. This nicely detailed version for X-Plane 11 was designed by Otavio Bonomi. 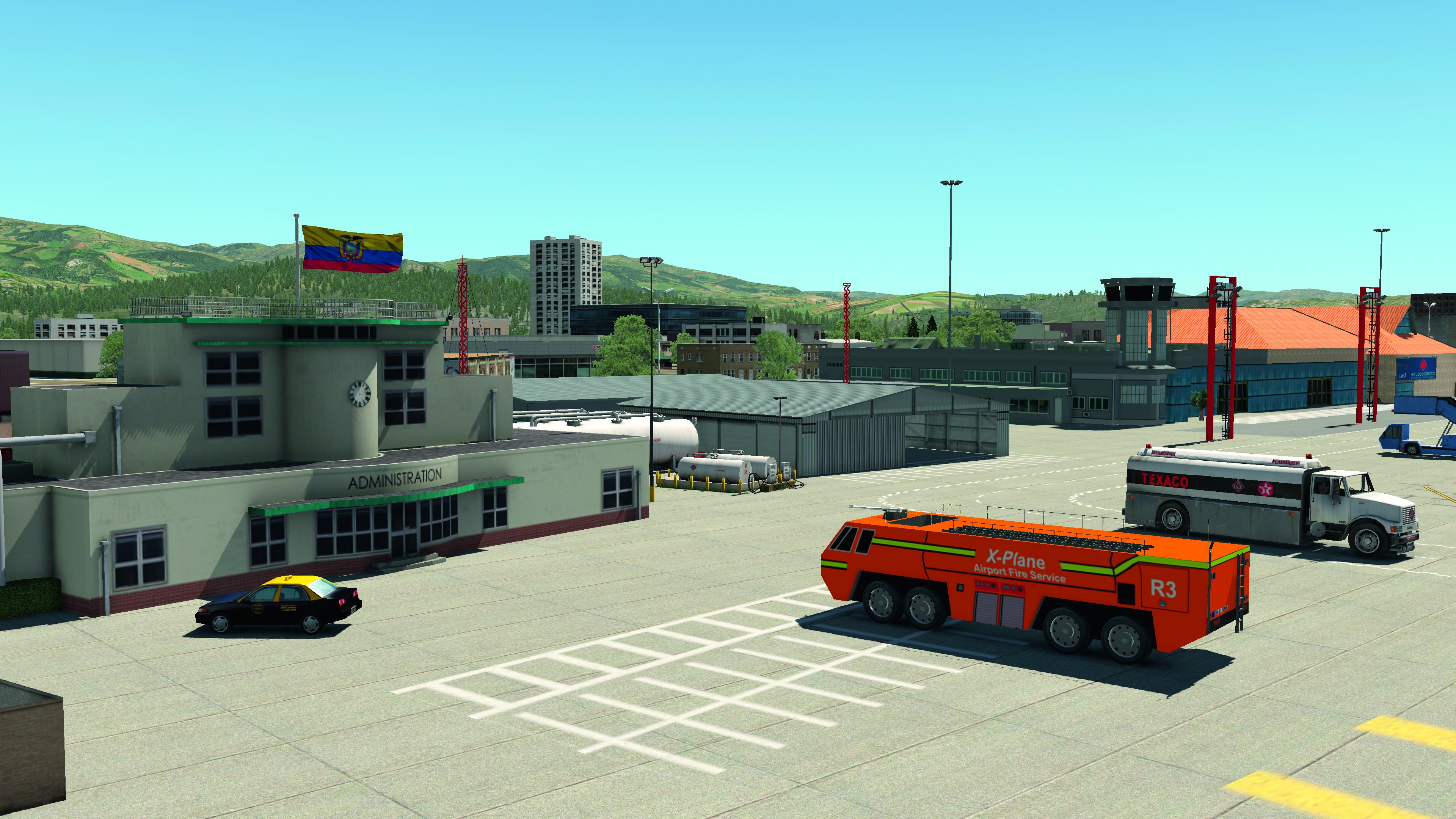 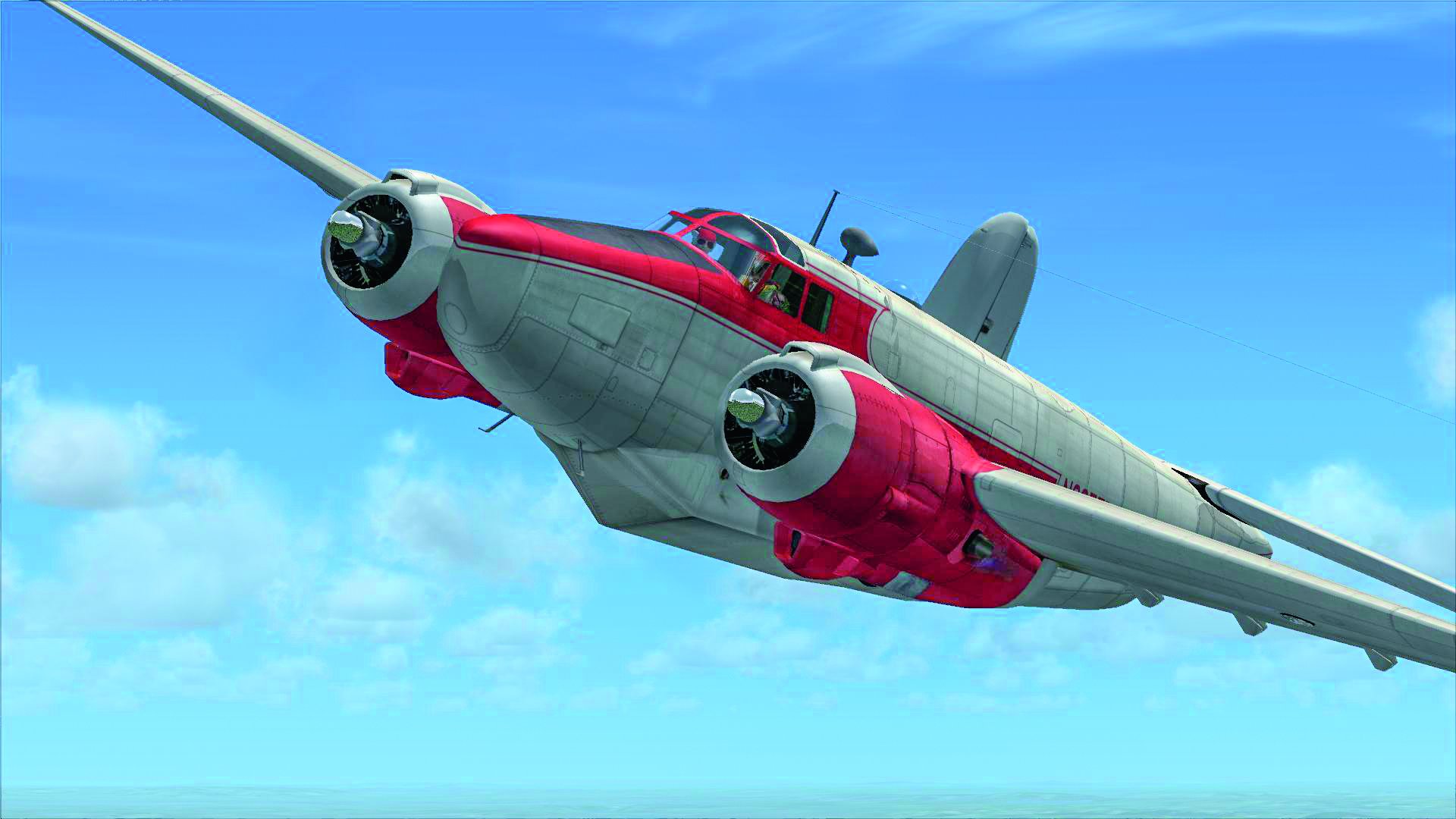 To help give our readers a better appreciation of the products reviewed in this issue, we have compiled the screenshots accompanying some of the articles into a series of galleries.

PC Pilot Verdict
At a glance: All in all, a fun aircraft to fly with stunning textures, and a good level of realism and systems simulation that will suit new to mid-level users.

PC Pilot Verdict
At a glance: Orbx has produced a realistic and detailed rendition of London City Airport.

PC Pilot Verdict
At a glance: Another stunning Cityscape from Orbx, with some poignant modelling included.

PC Pilot Verdict
At a glance: A very Early Access module with significant additional systems, sensors and weapons to be added. Fun and useful on the battlefield but those wanting a more complete module may want to wait on further development.

Looking for a review on a particular product, feature or tutorial? Our regularly updated PC Pilot index includes references (with accompanying issue and page numbers) to all our past reviews of software and hardware as well as features, tutorials and more. Now you can find that elusive article you’ve been looking for.

We have some interesting new additions to our virtual airline and flying club listing. Take a look to see if there is one to suit your taste. The experience and fun of being part of a virtual club or airline is second to none.