Specially selected freeware and videos of flight sims reviewed in the September/October 2020 issue.

As requested by our readers, the complete file set accompanying Issue 130 can now be downloaded as a single zip file. The videos are supplied as links to YouTube, we are unable to include them in the file due to limitations with file size. If you are on a low-bandwidth connection, we recommend you download the files individually in the sections below.

Specially selected videos of flight sims reviewed in this issue.

This video of Asobo Studio’s major free scenery update, covering the island nation of Japan, opens with a beautifully atmospheric and colourful sunrise over a lake. It then showcases a number of highly detailed locations including Kushiro Airport, Matsushima Bay, Sendai, Hachijojima (seen during the day and at night), Yokohama, Tokyo and of course, Mount Fuji. This trailer showcases not only the stunning and photorealistic detail contained within this package, but also serves to highlight the beauty of this country. Breathtaking!

Reviewed on pages 56 to 58 of this issue, this trailer of Team Fusion’s IL-2 Sturmovik: Desert Wings – Tobruk showcases not only the new desert scenery but also the wide and varied aircraft included, such as the Junkers Ju 88, Messerschmitt Bf 109F, Hawker Hurricane Mk.II and the Curtiss P-40 – to name but a few. It also highlights the different types of missions that can be undertaken, such as level and torpedo bombing, as well as airto- air and air-to-ground sorties.

This stunning video is included to accompany our review of DCS: Syria, starting on page 74. The production values of both the video and the product it’s showcasing are immediately apparent from the start of the opening shot. This has to be the most detailed package yet produced for DCS World and it shows in this video. From the aircraft to the buildings – everything is shown in eye-watering detail. So, sit back and enjoy!

For our flights this issue, we’ll be using the excellent Aerosoft A320/321 professional from www.aerosoft.com in Prepar3D v4.5. As usual, there are alternatives for FSX/P3D and X-Plane 11, and flight plans for each simulator platform can be found in the Pilot’s Notes in the link below. 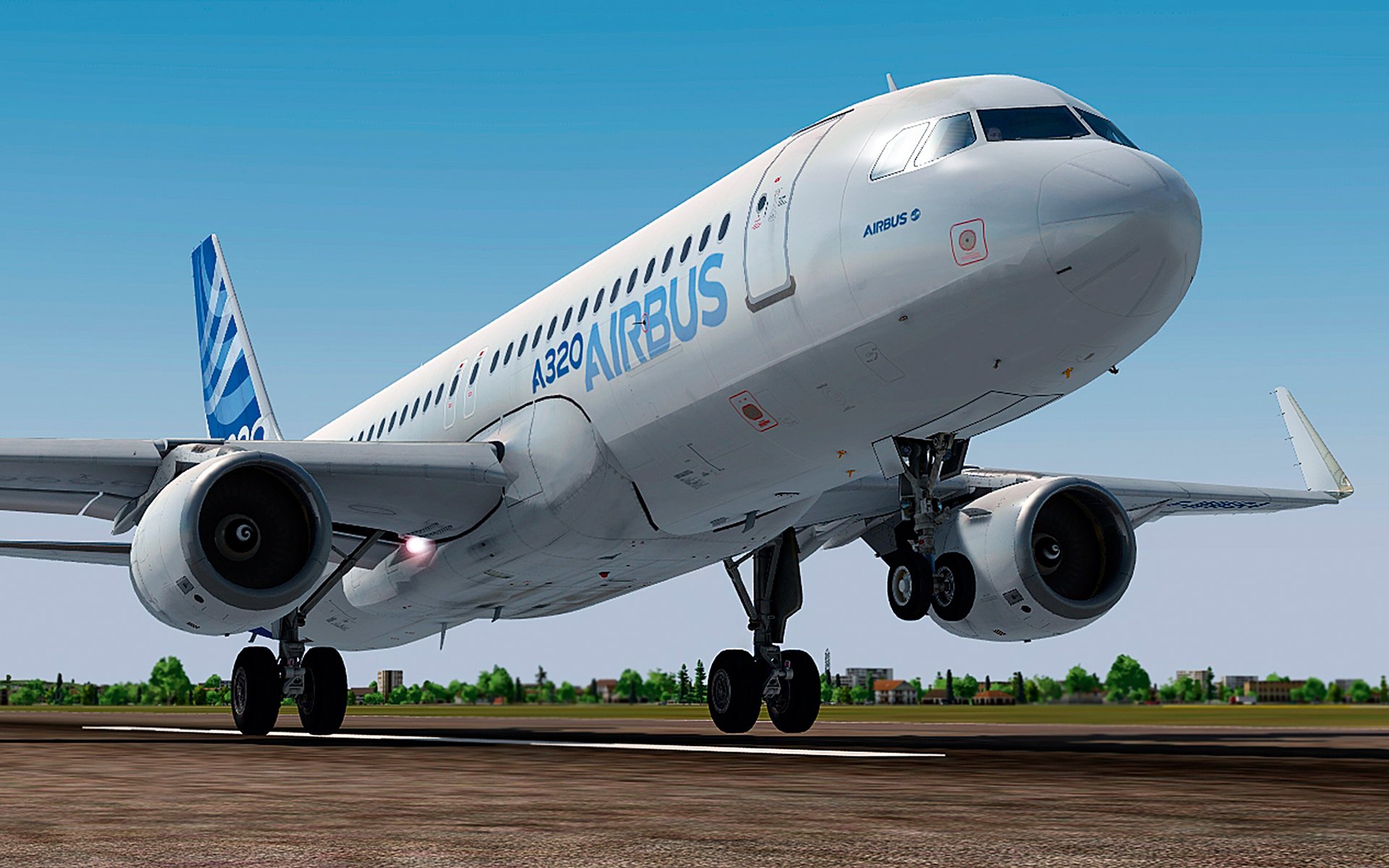 Once again, we have a collection of high-quality freeware files for you to enjoy. These aircraft, scenery and utilities easily compare with many commercial products but don’t forget, if you’ve enjoyed a particular file, please let the author know, it’s their only payback. By the same token, we’re always interested to hear from you if you’ve downloaded or designed a file that you think is worth sharing.

Permission
Although the authors of these files have very kindly given us their permission to include them on our website, they still remain the property and copyright of the authors. You are free to enjoy them for your own use but they must not in any circumstances be distributed, copied, uploaded to any other websites or disassembled in any way whatsoever.

Library files
Most X-Plane users will know that many freeware airport designers make use of Library files to enhance their creations. Consequently, it’s important to read the documentation within each airport to find out which libraries have been used. These libraries need to be installed in order to experience these airports as the authors intended.

I remember the first time I saw a Rockwell B-1B Lancer. It was at the Fairford air show held each year just outside Gloucester in the UK. I recall standing looking at it when someone behind me said: “It looks like Concorde on
Steroids,” which is a pretty good description. The Lancer is a supersonic variable-sweep wing, heavy bomber used by the United States Air Force. It’s commonly known as ‘The Bone’ after a newspaper article printed its model as a ‘B ONE’ but forgot to add the hyphen. It saw action in Iraq during Operation Desert Fox in 1998, also in Kosovo during Operation Allied Force and later in Operation Enduring Freedom in Afghanistan. Although built primarily as a platform for nuclear weapons, the Lancer was repurposed in 1992 to carry more conventional weapons, most notably the massive GBU-31, 2,000lb Joint Direct Attack Munition (JDAM). 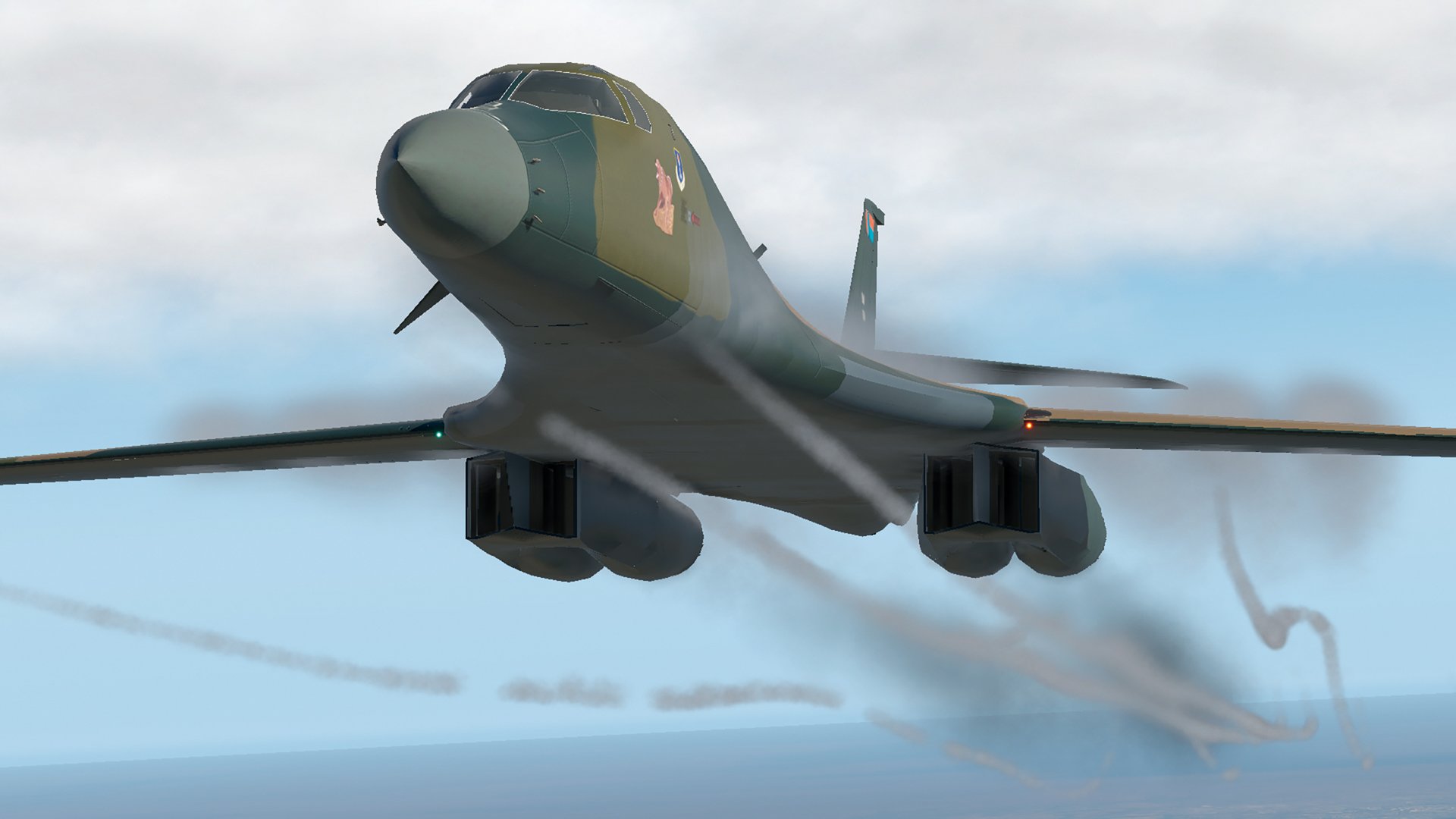 The model here was designed by Dom Henry, who has captured the sweeping lines of the Lancer beautifully. It comes with four liveries, an animated swept wing and a fully detailed 3D cockpit. The afterburner effect recreates the sheer power of those four General Electric F102- 102 engines. For those who like to immerse themselves in the detail, Dom has included a Quick Flight list to get you acquainted with the aircraft, a B1-B Fact Book by Rockwell International and a background overview written by members of the Boeing C-17 Program. 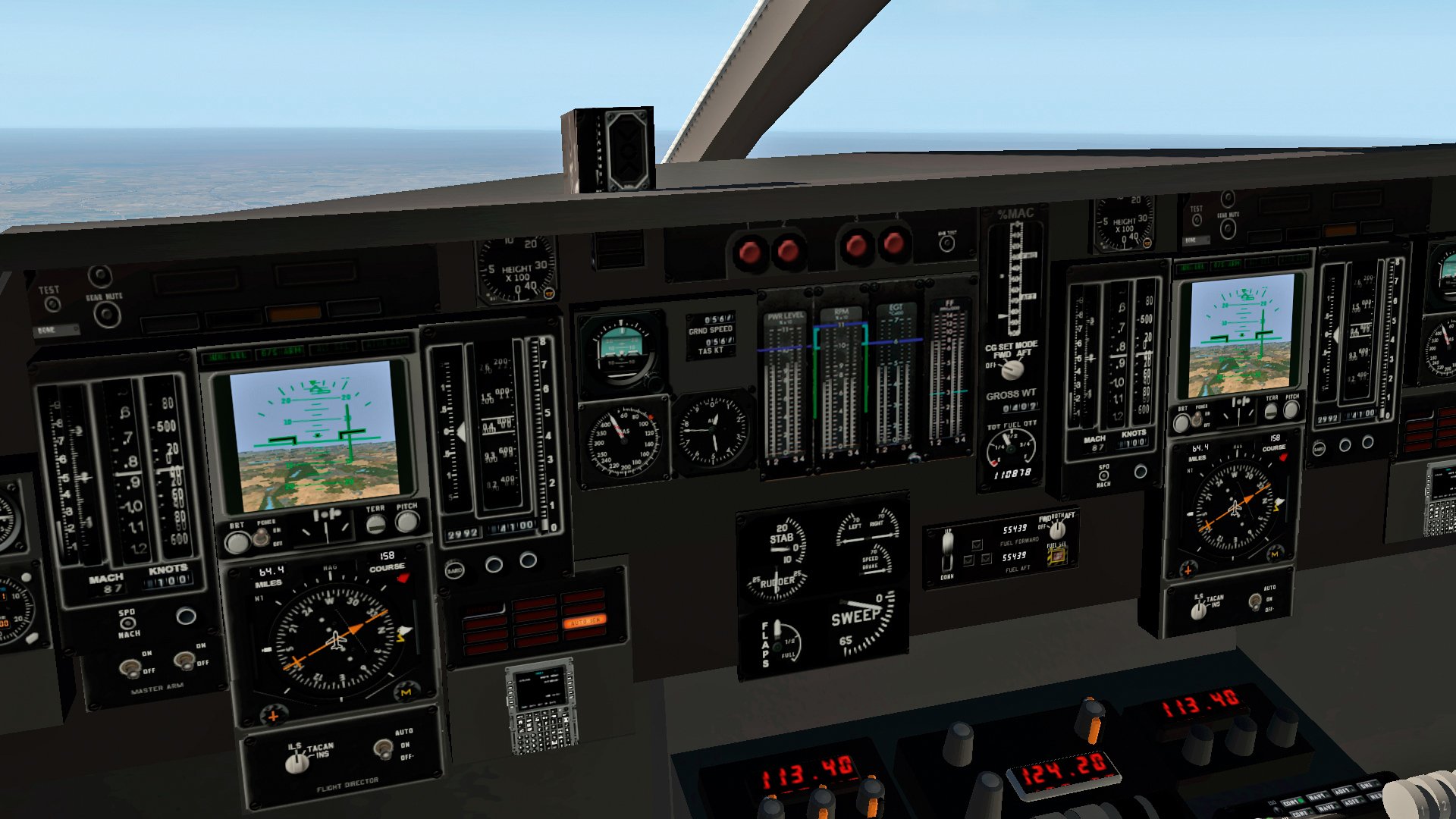 This is a set of superb Air New Zealand liveries for the new Microsoft Flight Simulator (MFS). They were created by Satbir (who, as it happens, also works for Air New Zealand), for use in a presentation. 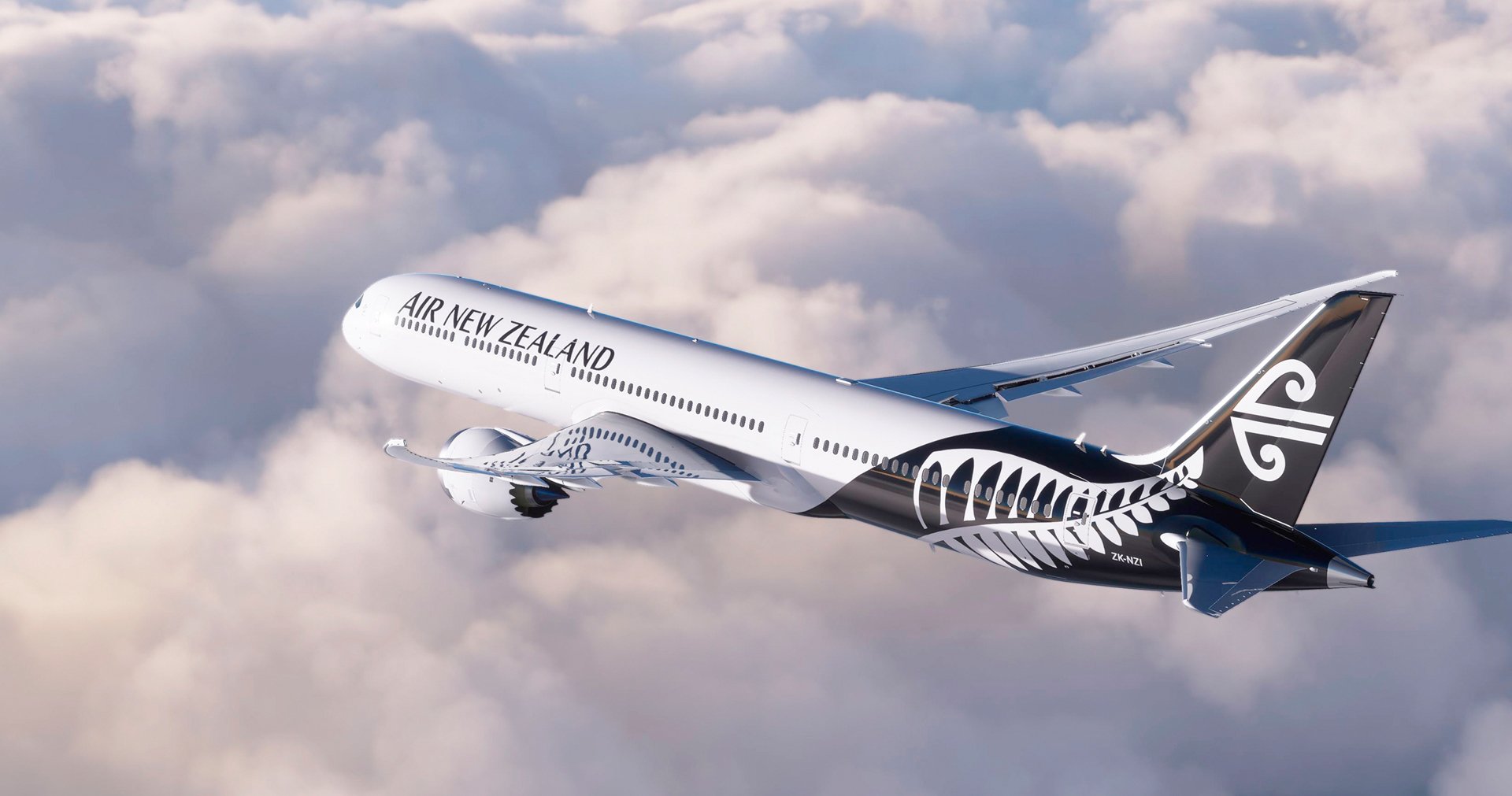 The Bréguet 941 was a French four-engine turboprop STOL transport aircraft developed by Bréguet in the 1960s. Although widely evaluated, it was not built in large numbers, with only one prototype and four production aircraft ever being built. The model here was designed by Patrick Le Luyer. 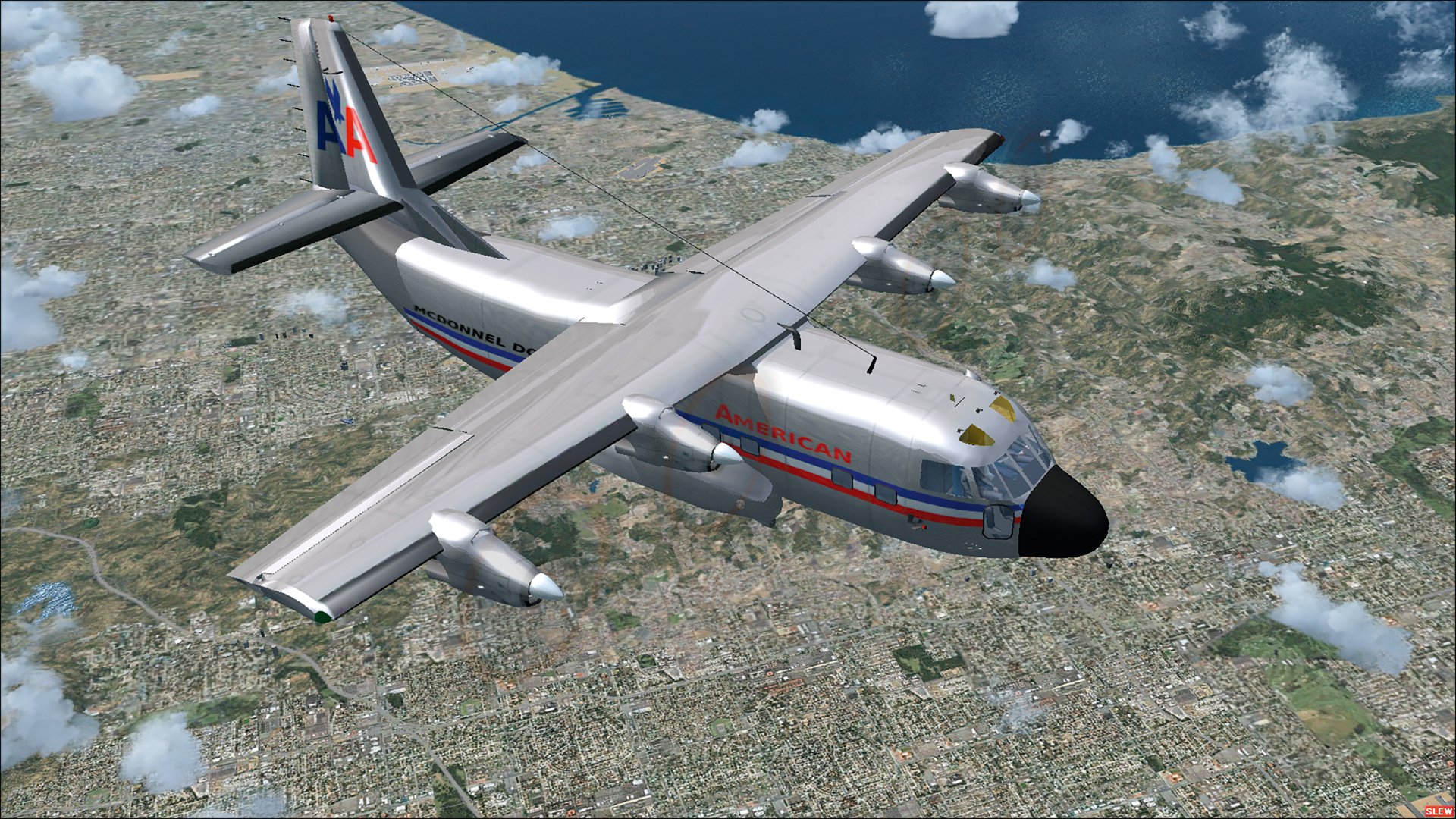 This revolutionary Blackshape BS100 Prime ultralight aircraft features a full carbon fibre frame, which makes for an extremely strong and low-weight yet agile aircraft. Its custom panel and virtual cockpit were designed by Massimo Taccoli. 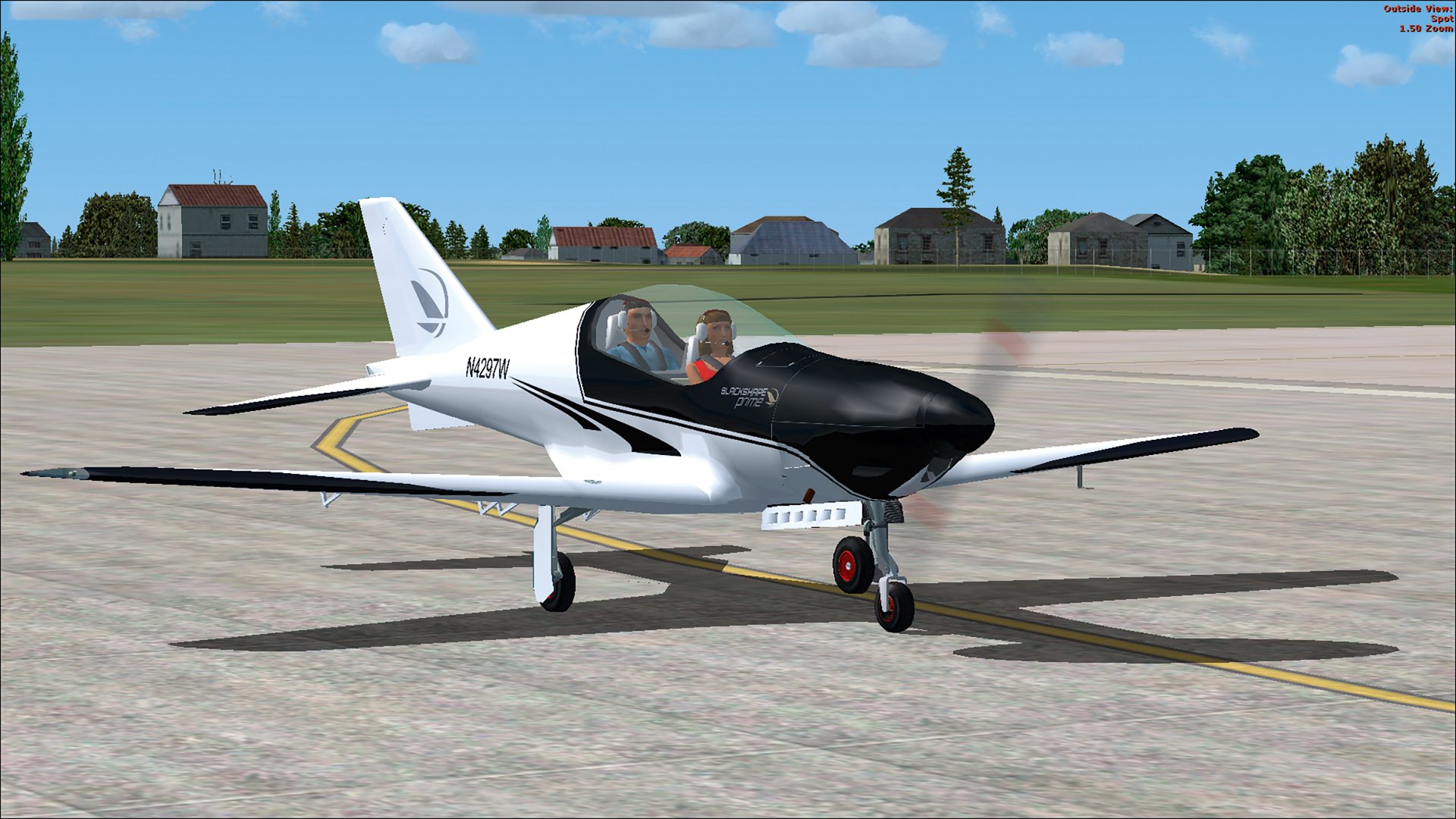 This is a very nice re-work of the default X-Plane 11 version of EGLC London City Airport. The author Joseph D Rocco has intimated that some objects are fictitious, so not 100% accurate but I believe it’s a
perfectly good revision of the airport. 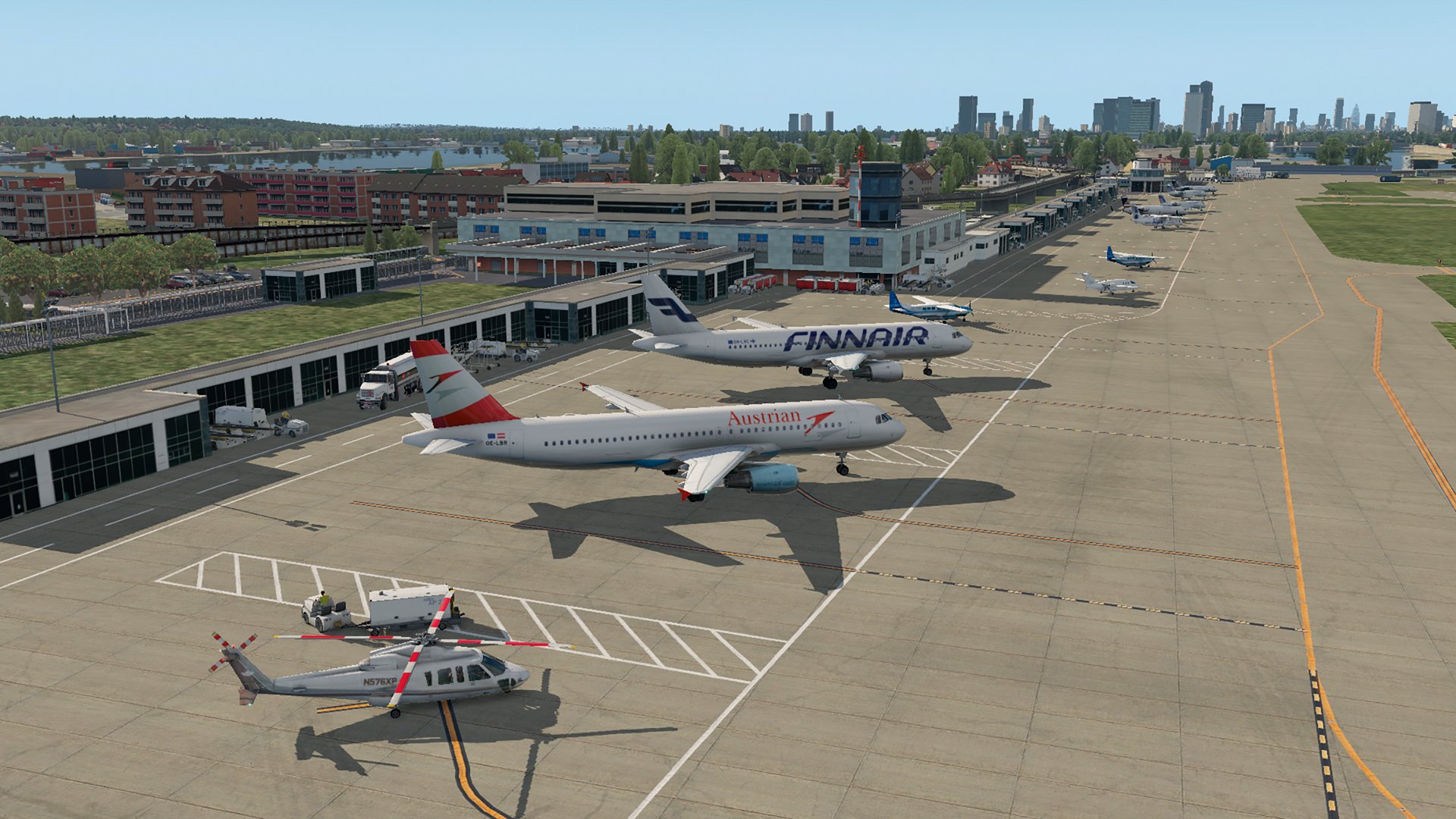 Burbank California KBUR is better known locally as Bob Hope Airport. This scenery, designed by Brett Delana, includes all the commercial and residential buildings in and around the perimeter, which
are created with accurate detail. 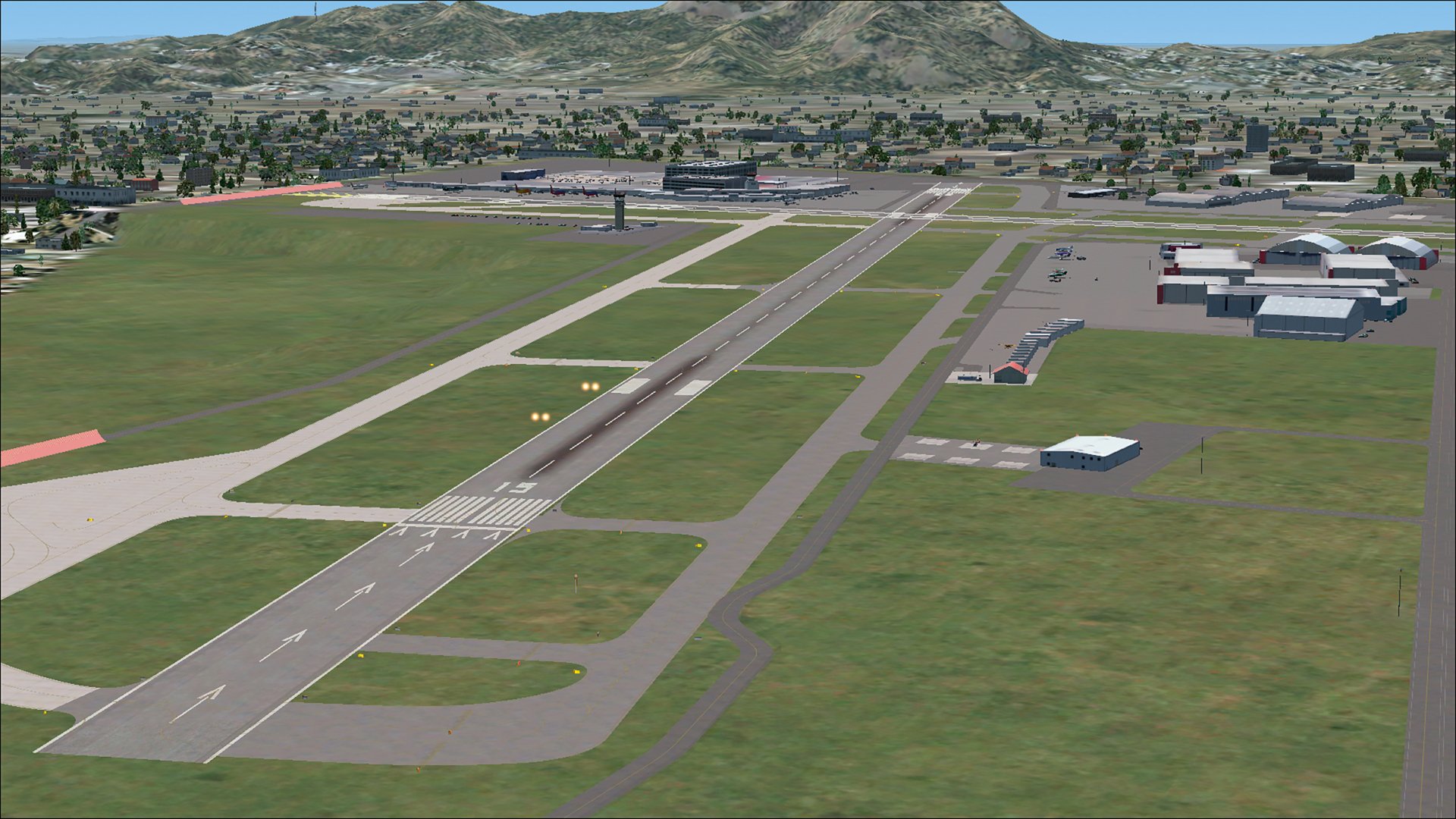 The aircraft depicted here was from the 113th fighter squadron, based at Poniatow Airfield near Warsaw in September 1939. It was piloted by Flight Lieutenant Hieronim Dudwal. This FS2004 model was created by Chris Lampard and Mark Shelley. 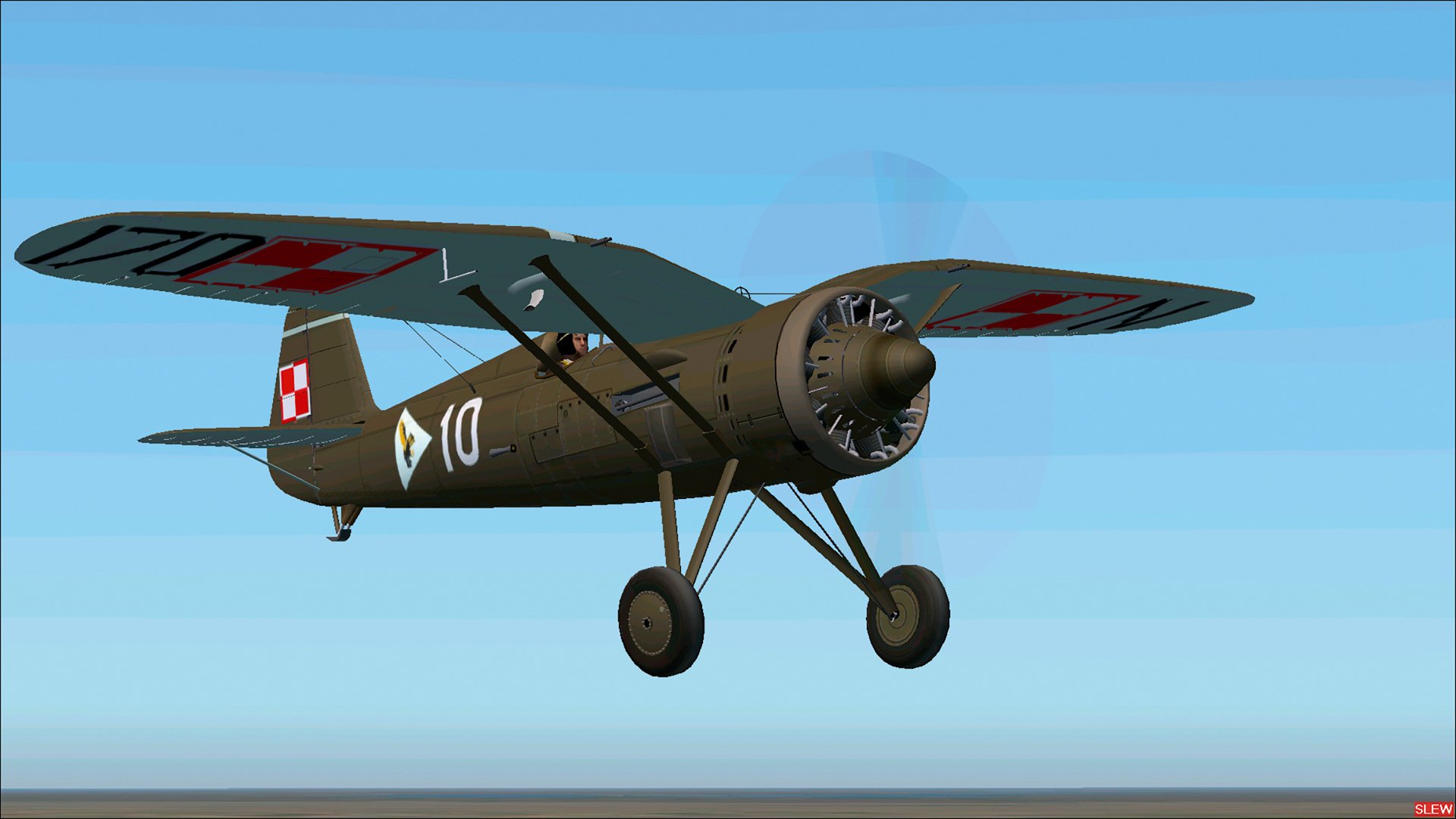 Glenforsa Airfield is a small unlicensed airfield on the Isle of Mull in Scotland UK. It’s quite a beautiful place, but to find it you need to use the ICAO code EG13. It was created for the new Microsoft Flight Simulator by TheGarner. 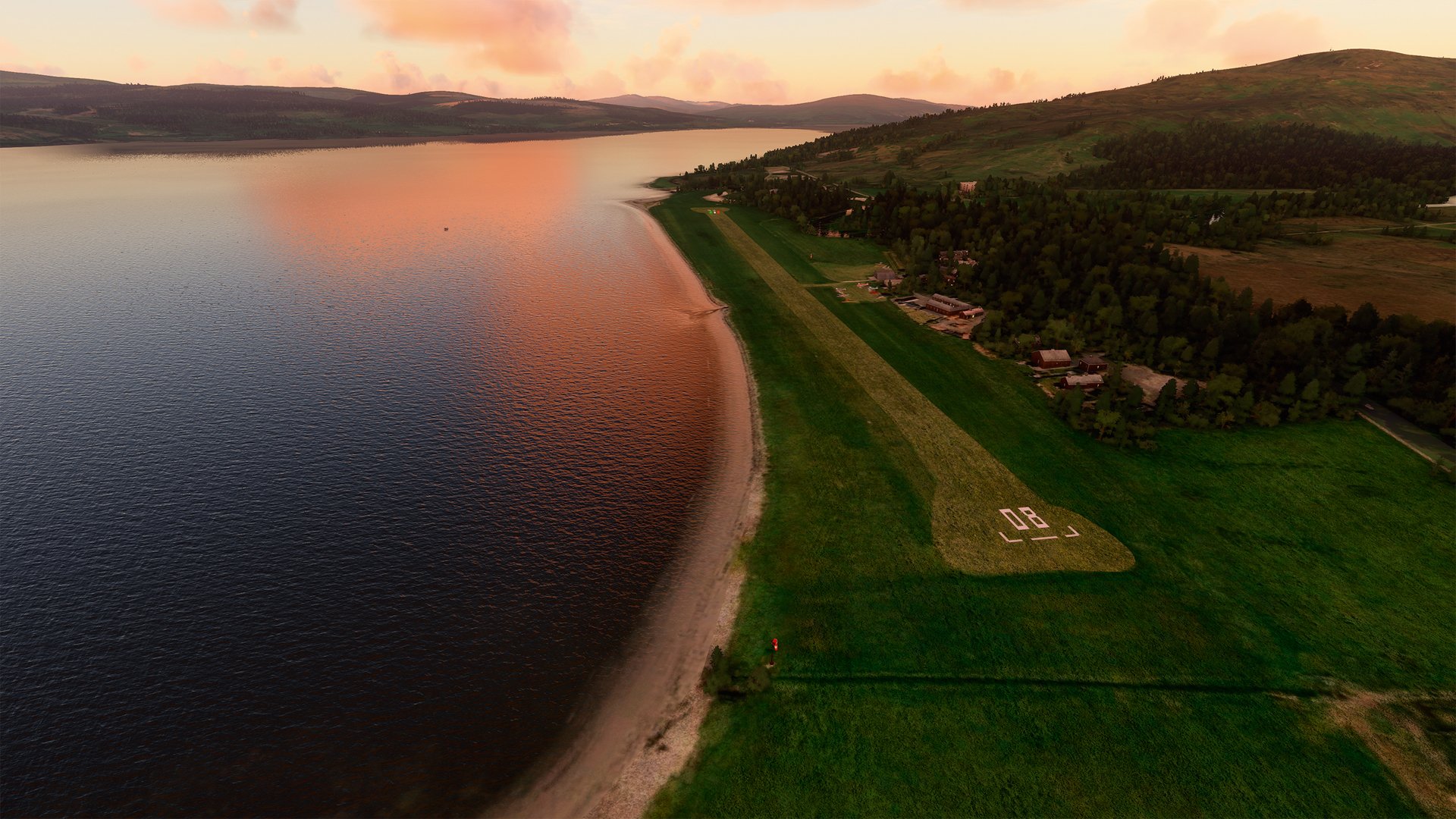 To help give our readers a better appreciation of the products reviewed in this issue, we have compiled the screenshots accompanying some of the articles into a series of galleries.

oliXsim’s Lockheed Lodestar Model 18 - A classic of the 1940s

Orbx's Innsbruck (LOWI) - The Capital of the Tyrol

Ugra Media’s DCS: Syria Map - The most detailed map yet made for DCS World

Looking for a review on a particular product, feature or tutorial? Our regularly updated PC Pilot index includes references (with accompanying issue and page numbers) to all our past reviews of software and hardware as well as features, tutorials and more. Now you can find that elusive article you’ve been looking for.

We have some interesting new additions to our virtual airline and flying club listing. Take a look to see if there is one to suit your taste. The experience and fun of being part of a virtual club or airline is second to none.