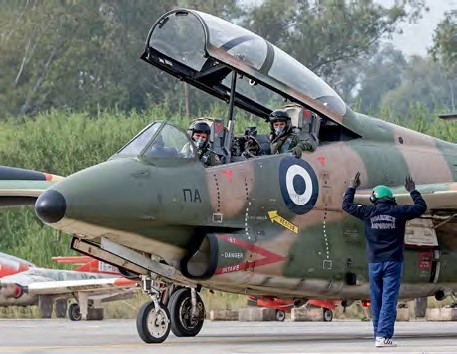 The instructor in the rear cockpit looks on as a member of the ground crew marshals a student’s T-2E to its parking area. Decommissioned T-37s – the T-6A’s predecessor in HAF service – can be seen in the background. The last Tweets were deactivated in October 2002.

The home base of the 120 Pteriga Ekpedefsis Aeros (PEA, Air Training Wing) of the Elliniki Polemiki Aeroporia (Hellenic Air Force, HAF) is situated on the Peloponnese, approximately 150 miles (240km) southwest of Athens. Although construction of Kalamata air base began in 1960, it was not until 1970 that the 120 Air Training Group was established. By that time, the HAF was operating the T-37 Tweet and the T-33 Shooting Star as its primary trainers. Four years later, the HAF acquired 40 T-2E Buckeyes, the new advanced trainer replacing the ageing T-33. The initial Buckeyes arrived at Kalamata in spring 1976. In August the following year, the 120 Air Training Group was renamed as the 120 Air Training Wing.