Peruvian NA-50 to fly for bicentennial

At Las Palmas Air Base, just south of Lima, Peru, the world’s only surviving North American NA-50 fighter is now under restoration to fly, after spending more than 50 years displayed on a pole at the airfield. It is planned to have the machine, 50-591/XXI-41-4, airworthy in time for the bicentennial celebrations of the establishment of the republic of Peru, the NA-50 being scheduled to fly at several commemorative events across the country, which gained independence from Spain in July 1821.

The NA-50 was North American’s first fighter design, being developed as a combat variant of the NA-16 trainer which spawned the T-6 Texan/Harvard/SNJ line. All seven NA-50s built were delivered to Peru in May 1939. Nicknamed ‘Torito’, meaning ‘Little Bull’, the type was armed with two .30in Browning machine guns and powered by an 840hp Wright R-1820-G3, giving the NA-50 a maximum speed of 295mph at 9,500ft.

Operated by Escuadrilla 41 of XXI Escuadrón de Caza (Fighter Squadron), the aircraft — fitted with bomb racks under the fuselage — saw combat in the July 1941 border war with Ecuador. During that conflict the NA-50 achieved immortality in Peru as a symbol of the courage of Peruvian aviators, particularly due to the self-sacrifice of José Abelardo Quiñones Gonzáles (known as Quiñones) who was killed in action while flying NA-50 50-950/XXI-41-3. On 23 July 1941, 27-year-old Quiñones was piloting one of four NA-50s attacking an enemy stronghold close to the Quebrada Seca river, but after dropping his bombs the NA-50 was hit by antiaircraft fire. Realising that the Ecuadorian defences posed a great threat to the lives of his fellow officers and the success of the mission, Quiñones dived straight into the antiaircraft batteries.

A lot of corrosion has been found, but all the parts are there and the project is proceeding

The NA-50s remained in service until 1961, the last remaining machine, 50-591/ XXI-41-4, then being restored and placed on the pedestal next to the burial site and statue of Quiñones at Las Palmas. During 2018 the NA-50 was taken down and moved to the SEMAN — Peruvian Air Force maintenance service — hangar. So far most of the work has involved dismantling and preparing for the restoration task, making CAD drawings of the parts that need to be reproduced and gaining data from sources, mostly in the USA, that can help with the restoration. A lot of corrosion has been found on the airframe, but all the parts are there and, with plenty of technical knowledge and volunteer workers from Peruvian Air Force maintenance units, the project is proceeding, although commercial sponsorship is being sought. 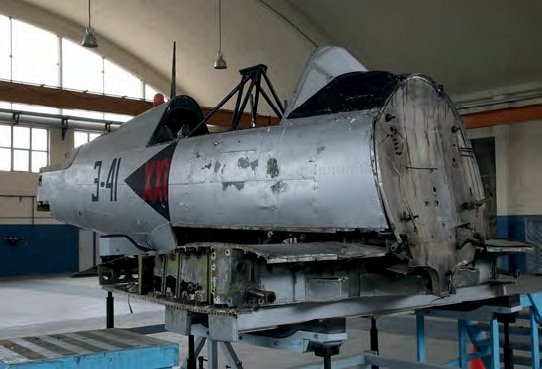 The stripped fuselage of the NA-50 in the SEMAN hangar at Las Palmas, looking rather more bulbous here than when the aircraft is fully assembled. NIGEL HITCHMAN

On 1 September 1940, a development of the NA-50, the NA-64, made its maiden flight. The machine boasted an increase in firepower, with two 20mm cannon in underwing gondolas supplementing the Browning machine guns. It had redesigned tail surfaces with a more angular rudder, and a beefed-up undercarriage. Six examples were ordered by the Royal Thai Air Force, but while they were en route by sea Thailand was invaded by the Japanese, and the ship was detained in Hawaii. The aircraft were requisitioned by the US Army and returned to the USA, where, with the armament removed, they operated as fighter trainers with the designation P-64. A single example, 41-19085, survives with the Experimental Aircraft Association (EAA) at Wittman Field in Oshkosh, Wisconsin, and following restoration flew again at the 2016 EAA AirVenture show there.