Dino Marcellinocovers an air patrol mission by the Guardia di Finanza and 60 years of the Piaggio P.166 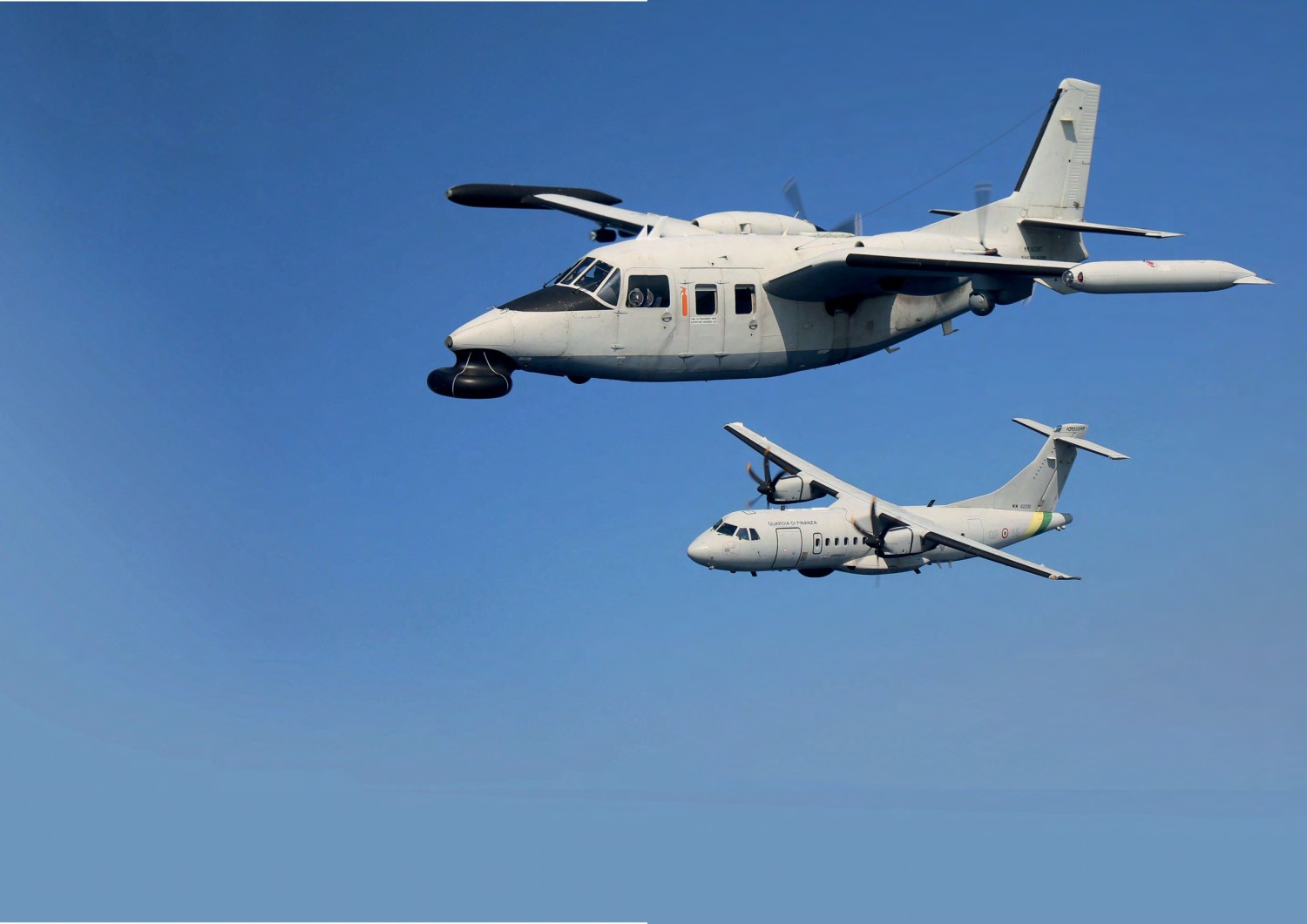 Last year, 2017, marked the 60th anniversary of the Piaggio P.166, an unmistakable and charming aircraft, characterized by its unusual seagull shaped wing and pushing propellers. The prototype flew for the first time on November 26, 1957 and the production standard aircraft was successful, being extensively used by civil and military operators around the world.

Among others, in Italy, it was used by flag carrier Alitalia as a training aircraft, and by the Aeronautica Militare (Italian Air Force), Guardia Costieria (Coast Guard) and Guardia di Finanza.

In July 2017, the Guardia Costieria retired its last P.166 from service, leaving the Guardia di Finanza as this amazing type’s sole operator in the world.

AIR International had the opportunity to fly on this special machine to report on its busy daily operational tasking, despite its venerable age. To appreciate and understand how the P.166DP1 works, a look at the Guardia di Finanza’s organization and its activity will help to explain the context in which the P.166 operates.

The Guardia di Finanza, often abbreviated as GdF, is the border and treasury police force (economic and financial police) of the Italian Republic. It is a state service structured as a military force, and has a varied set of missions.

Its primary task is to protect the economic and financial interests of Italy and the European Union.

This means investigating criminal organizations and their activities in financial markets such as money laundering; their illegal tracking of arms, drugs, cigarettes and immigrants; illegal fishing and the counterfeiting of industrial products; fraud and corruption in public tenders and administrations; tax evasion; and cybercrime.

Secondary roles are search and rescue at sea and on land, transportation of prisoners, and supporting civil protection and other organizations in the event of a natural disaster.

To accomplish its mission set, the GdF has around 65,000 personnel, well equipped to operate on the ground, at sea and in the air.

The branch within the GdF of special interest to AIR International is the Comparto Aeronavale (Aeronaval department), which is formed of two main components: the naval service and the air service, the latter is equipped with both rotary and fixed wing aircraft.

All GdF aircraft are based at Pratica di Mare Air Base near Rome, assigned to the Gruppo Esplorazione Aeromarittima (GEA or Aero Maritime Exploration Group) commanded by Lieutenant Colonel (pilot) Domenico Di Biase. There are three units and each conduct a specific mission:

An air section, dedicated to medium-range patrol at sea and the airborne remote sensing, flies the Piaggio P.166DP1. 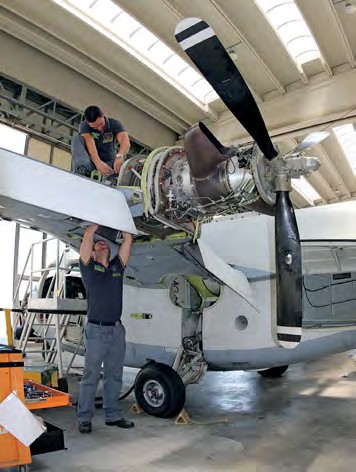 GdF pilots are very fond of their P.166DP1s, which are affectionately nicknamed “Piaggione” and due to its reliability, pilots refer to the type as “a good father of the family”.

In the early 1990s the Guardia di Finanza acquired twelve P.166DL3s, but because of the airframe’s age and the type being out of production for decades, spare parts are difficult to find, so only eight remain in service today. Every effort is made to maintain them in operational condition. Extant airframes are used as a source of spare parts, but the challenge will continue to become ever greater as the P.166 is expected to remain in service beyond 2020.

A P.166DP1 crew comprises a pilot, copilot and systems operator. When an aircraft is detached to another base, or when the mission involves a refuelling stop at another airfield, the crew is complemented by a technician.

The systems operator works at a console to manage the radar (housed in a large radome at the front of the aircraft, which characterizes the fuselage shape), the Daedalus infrared and ultraviolet scanner, the EOST system which includes three cameras (colour, infrared and black and white), and the airborne remote sensing system. 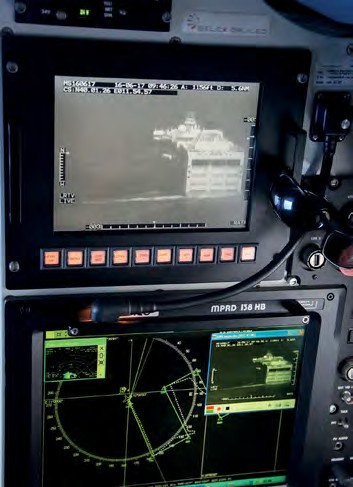 The console has two displays. In this photo, the top screen shows the video fed from the multi-spectrum sensor, the lower screen also shows the FLIR image, the radar picture and the mission track 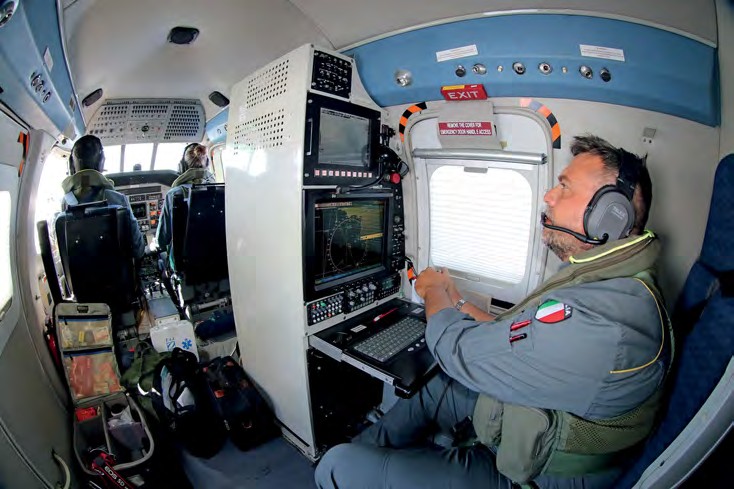 The P.166DP1 cabin features a systems operator console on the right-hand side. 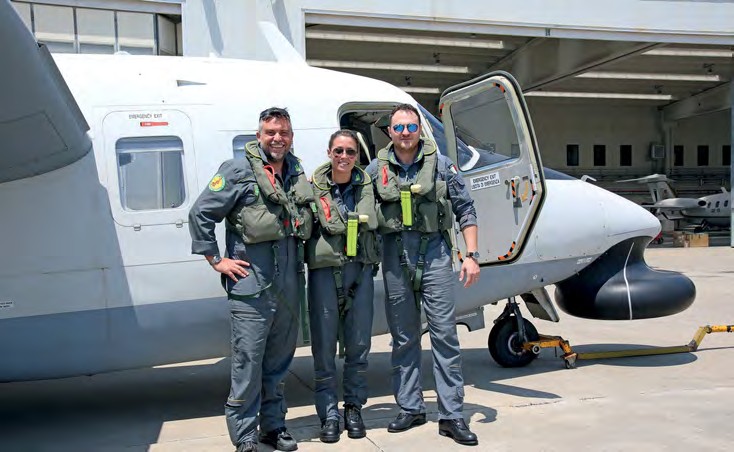 The P.166DP1 has a four-hour endurance, is not pressurized (which is not a problem for the crew because it only operates at 3,000ft), and data and images gathered during the mission are recorded on a hard drive for postmission analysis in a GdF laboratory.

Dino Marcellino flew with the Gdf on a routine patrol mission over the Mediterranean Sea. His crew were commander pilot Captain Francesco Miranda, co-pilot Lieutenant Federica Casini, the first female P.166 pilot, and systems operator and instructor Head Warrant Officer Massimiliano Calabrese. In the briefing, the author was advised that in the event of an emergency, to escape from the aircraft he would have to move forward at 45° due to the position of the pushing propellers mounted back on the wings. Because of the overwater mission, all aircrew must wear a cumbersome and heavy life jacket, an essential item in case of forced ditching on water so far off the coastline.

The author considers the P.166 as a machine with two souls: externally its 60- year old design is evident, yet inside it’s an almost modern operational plane thanks to its dedicated systems (despite evident wear and tear on some of the components due to extensive daily use).

Inside the cabin the systems console is located on the right side, leaving free space to move around the cabin and to stow equipment.

While the pilots were doing the pre-flight checks, the systems operator inserted the mission plan into the system. The routing of the mission can be viewed on the console’s screen; the author’s mission involved a lot of parallel segments to form a grid covering a large area of the Tirreno (Tyrrhenian) Sea between Naples and the Island of Sardinia.

Flying at 1,500ft (457m) and 135kts (250km/h), the radar and FLIR displays showed traffic at sea, which all looked to be clean, some fishing boats, ferries, and sailing boats. After 2 hrs and 45 mins of flying, Massimiliano observed a ship which was manoeuvring in a strange zigzag pattern. Even though the ship was outside of the planned mission patrolling zone, the situation was abnormal, so Francesco and Federica decided to investigate. Massimiliano gave the coordinates and the pilot departed the patrol grid. Using the FLIR the observer acquired imagery of the ship as a big ferry sailing from Genova to Palermo.

Arriving on the scene, the crew noticed all the passengers were on the left side of the main deck. The ship did not reply to radio calls, so a call was made to the maritime coordination centre in Naples. Evidently a passenger had fallen into the sea and the ferry was searching for him. The pilot descended and flew around the ship, now in contact with the ship, and despite the difficulty of spotting a person in the water, both the aircraft’s crew and the ship almost simultaneously spotted the person.

Checking the fuel state, the pilots decide to stay on scene to oversee the rescue. Fortunately, the man was safely taken onboard the ferry, suffering from shock but no injuries. The aircraft left the scene and returned to Pratica di Mare with the crew managing the flight parameters to conserve fuel.

With four hours of flying, including a real SAR event, the author gained great experience and a first step in his understanding of the potential of this charming old aircraft.

The hyperspectral and thermal imaging systems have a large spectrum of utilization used to detect criminal activity and to support communities in Italy and overseas.

When the author visited the GdF at Pratica di Mare in the summer of 2017 one P.166DP1 was deployed to Greece in support of Operation Poseidon managed by Frontex. A second Piaggione was in Albania on a five-month detachment tasked to identify cannabis plantations as part of an agreement between the Albanian and Italian governments; now an annual deployment.

Drug traffickers cultivate cannabis in little pots normally dispersed in woodland. Spotting pots from the air is difficult and on the ground remains a dangerous operation due to the presence of the criminals. The P.166DP1, on the other hand, can detect the cannabis plantations using the CASI hyperspectral imaging system. When exposed to the sun, each type of plant reflects its distinctive spectrum, which the CASI can disseminate. 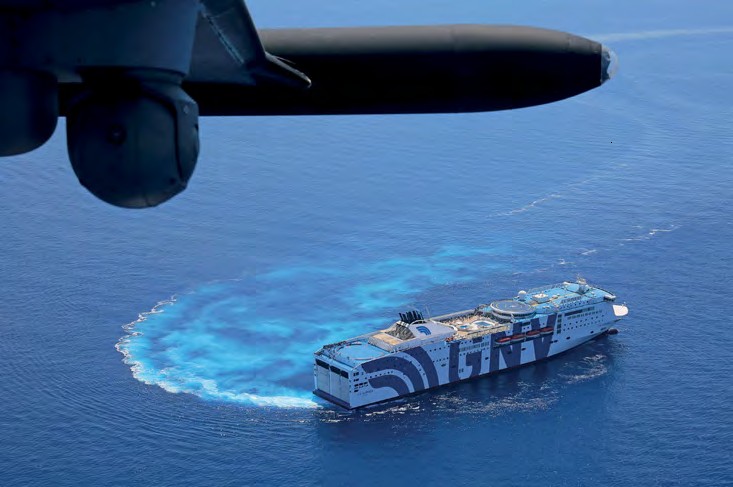 The ferry La Superba manoeuvring while searching for a man overboard. 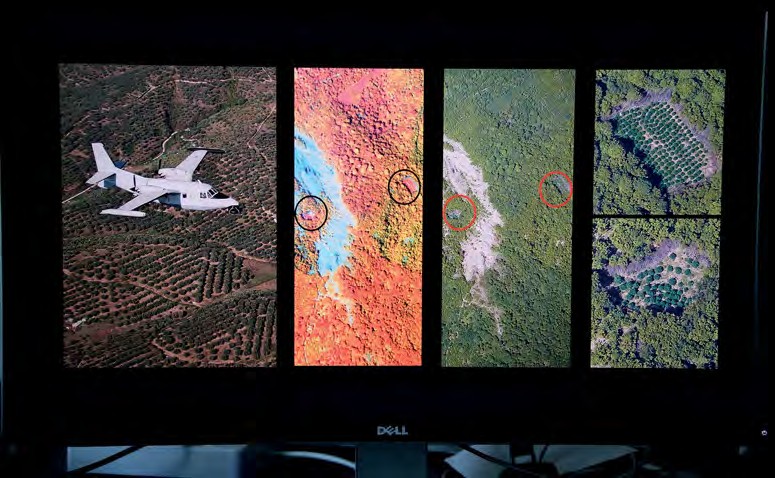 Images acquired by the CASI system of a cannabis farm in Albania. 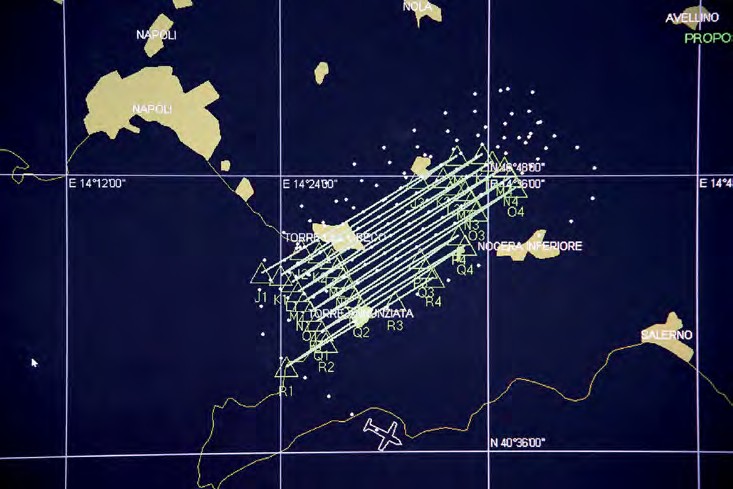 A flight grid flown by a P.166DP1 over an archaeological site at Pompei.

Each mission has to be planned accurately based on the specific zone to be surveyed as requested by the Albanian police. Depending on the type of terrain (mountain or countryside) the flight is conducted at altitudes between 6,000 and 10,000ft.

Timing is crucial because all vegetation has to be well illuminated by the sun without shadows to enable the CASI system to make the best dissemination. Optimum hours are limited. The aircraft must fly at a specific speed compatible with the camera settings and to correctly acquire the data. The zone is surveyed using a grid of ten parallel lines, each five miles long (but can be longer). The CASI system records two sets of thermal and electro-optical images. Comparison of the two sets of images provides an accurate method of surveying the cultivation, detecting cannabis and generating precise coordinates for use by the Albanian police. Effectiveness of the CASI system is such that it often identifies cannabis on the house roofs in small villages.

The TABI thermal imager is used extensively for other types of investigations, such as pollution at sea and on land. One example of its use is to detect wash from the hold or tanks of cargo ships and tankers illegally discharged at sea. Abnormal thermal differences between sea water and pollutants are easily detected by the system.

The same system is also used to detect rubbish dumped on land or inland waterways. During a nighttime mission, when overflying a small lake, the TABI system recorded an abnormal water temperature of 40°C, it should have been of 10°C. The subsequent investigation discovered discharge of industrial chemical waste. Away from pollution but equally important, the TABI system has been used to help save the famous archaeological site at Pompei by detecting water infiltration on the site. Similarly, previously unknown archaeological sites buried underground have been discovered thanks to the system.

Constantly busy with its specialized mission set, the Guardia di Finanza’s Piaggiones may be 60 years old, but remain a very effective survey and patrol aircraft with a relatively low operating cost; a workhorse with the charm of a thoroughbred.