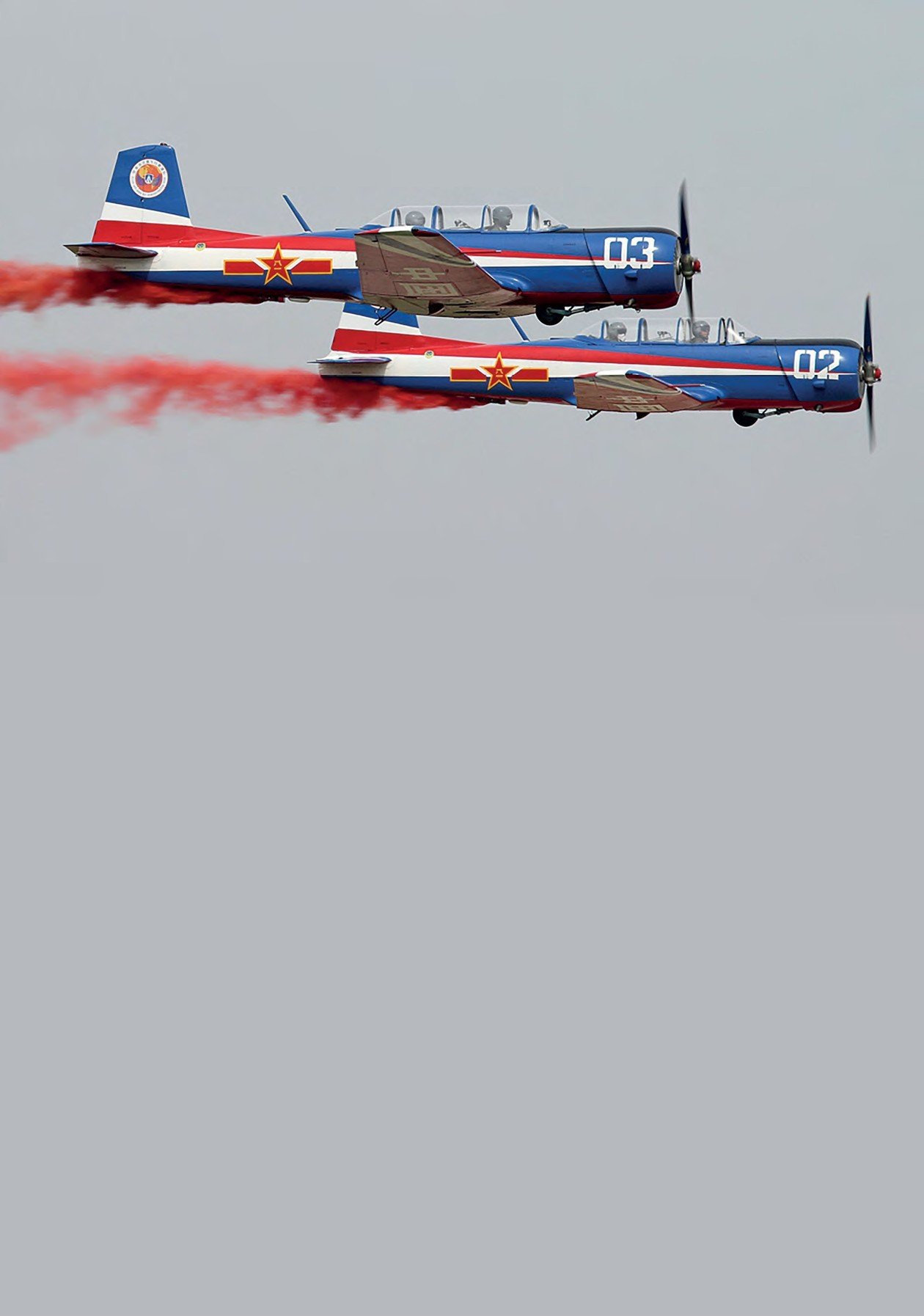 Despite the CJ-6 remaining as the PLAAF’s sole primary trainer, there are only a few images of operational aircraft available. The ones featured are from the Sky Wings aerial demonstration team.
All images Chinese internet

AS COVERED in the Chinese naval aviation report in the March issue, most focus on Chinese military aviation is usually given to the technical modernisation of the aircraft, because at first sight aircraft are more spectacular and much easier to follow.

However, the latest developments in tactics and training are probably even more important for any potential future operational use, and as one follows reports in the Chinese media, the People’s Liberation Army shows increased confidence in its capabilities and training conditions. Obviously, the People’s Liberation Army Air Force (PLAAF) is following a system more akin to western concepts, and not only has the training system been modernised and new types introduced, but the PLAAF has increased its training with other air forces in recent years, and the frequency, complexity and intensity of exercises appears to be increasing.

This report provides an overview of the latest developments in the PLAAF training syllabus.

In 2011 the PLAAF undertook organisational reform and the current four-phase training system is a direct result of the reform. Also at that time an official manual was published titled ‘Outline of Military Training and Evaluation’ formulating – in fact demanding – fundamental reforms concerning all conditions, particularly in environments involving complex electronic warfare threats and those that are technologically complex in joint operations.

Under informative conditions is the PLAAF’s term for such training environments and a concept comparable to network-centric warfare used by the United States. A major aspect in the PLAAF’s current system is related to reform of the flight colleges. This resulted in a new organisational structure for the three consolidated flight colleges in Harbin, Shijiazhuang, and Xi’an, each of which includes two of the previous flight colleges, and has several different types of trainer aircraft assigned rather than a single type of basic and intermediate trainer.

Back in the 1990s, the PLAAF consolidated more than 15 flight schools to just seven flight colleges, and in May 2004 the Air Force Aviation University (AFAU) was founded in Changchun. Then in April 2012, one former flight college was transformed into a flight instructor training base to train flight instructors, who once their course is complete will serve at one of the three flight colleges or at operational units, and was subordinated to the AFAU.

Given the latest restructuring and including uncertainties or open issues, PLAAF aviator training, unlike naval aviation training is organised in four phases, which are different for cadets selected for bomber, transport, and helicopter. In 2012, the PLAAF implemented a new four-phase system, with two training programme models in operation. For some time, new pilots took ten years to become experienced with the ability to carry out every type of combat mission independently. The previous tenyear period required to qualify as an experienced pilot is one main reason for the revised four-phase structure which cuts time to seven years. The four phases are: academic education, professional education, combat aircraft transition training, and combat application training.

An ironic reality of the PLAAF’s training system is the dependency on the earlier-generation JJ-7A at a time when newgeneration J-16 and J-20 fighters are entering front line service.

The oldest type in PLAAF service is the Hongdu CJ-6, development of which began in late 1957. The type was expected to be replaced by a new trainer. The expected CJ-7 trainer was cancelled, and a request for proposal was issued for a nextgeneration primary trainer.

The PLAAF’s primary jet trainer is the JL-8, initiated in 1986 by Hongdu and Pakistan’s PAC, while the Guizhou JL-9 is its lead-in fighter trainer. The Guizhou JL-9 is based on the earlier JJ-7 and features a new front fuselage with a solid nose housing, a radar, and side air inlets; a new double deltawing; modern integrated avionics; and cockpit. The JL-9 is powered by the old generation WP-13F(C) turbojet and a mechanical, rather than a fly-by-wire, flight control system. Advanced flying training is undertaken by the Hongdu JL-10, an aircraft jointly developed as a heavily modified Yak-130, which entered PLAAF service in late 2017. 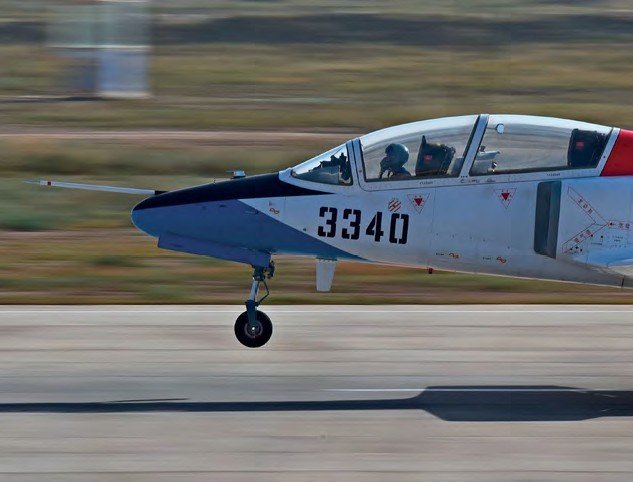 The PLAAF’s standard primary jet trainer is the JL-8 such as this one flown by the Xi’an Flight Academy’s Red Falcon aerial demonstration team. 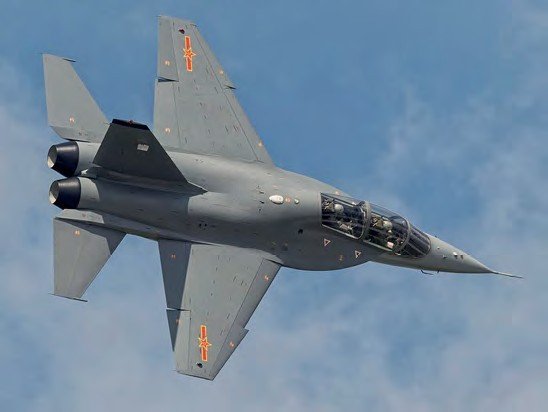 The JL-10 is the PLAAF’s most modern jet trainer based on the original Yakolev Yak- 130 and entered service in late 2017 with the 172nd Brigade based at Cangzhou- Cangxian Flight Instructor Training Base. 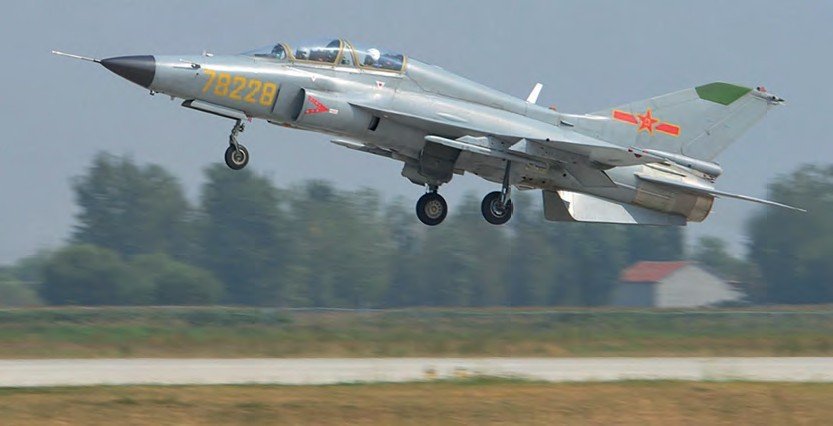 Based on the JJ-7A, the JL-9 is a de facto new trainer but lacks performance and a digital cockpit for preparing student pilots for new generation fighters. This JL-9 is flown by the 171st Brigade based at Cangzhou-Cangxian Flight Instructor Training Base.

Besides a general reorganisation and revision of the training syllabuses, the PLAAF has increased the number of combat drills and exercises to significantly improve its operational readiness.

For some time, a major drawback of the PLAAF’s doctrine was its inability to properly use its modern weapon systems. Despite the overwhelming effect of airpower demonstrated by coalition forces in the Gulf War, some members within the People’s Liberation Army leadership remained oblivious to the value of modern airpower.

Gradually, old doctrine based on ‘just supporting ground units’ changed to formulate the aim of ‘becoming an independent force capable of running large-scale offensive operations’. An important step in this shift was establishment of the so-called flight test and training centre at Cangzhou-Cangxian, which is now a true flight test and training base with subordinate brigades. A second important step was establishment of a specialised test centre for weapons integration, testing and tactical training at Dingxin in June 1999. This is a dedicated detachment of the Chinese Flight Test Establishment at Xi’an-Yanliang.

Both organisations helped improve the degree of realistic training in different scenarios such that PLAAF pilots now practise flying in challenging scenarios, at night and in extreme weather conditions.

Recent PLAAF exercises like Red and Blue Sword can be likened to US Air Force’s Exercise Red Flag. The Sword-series exercises involve different branches of the People’s Liberation Army all operating in complex electromagnetic environments with robust threat laydowns to simulate real battle conditions that a potential military adversary may present.

The PLAAF is also seeking to cultivate greater autonomy among its pilots and encourage independent decision-making. The PLAAF’s aim is clear: to run a pilot training syllabus which is designed to establish a technologically advanced, professional, and operationally capable air force to protect and advance Chinese interests in the Asia-Pacific region and beyond.

Besides the PLAAF’s progress to date, its biggest remaining weakness is a having sufficient numbers of capable training aircraft; numerically the PLAAF’s most important trainer remains the JJ-7A. Another issue is the lack of adequate primary and advanced turboprop trainers, and the issue of having a progressive training system that uses aircraft all equipped with digital cockpit instrumentation; a situation in part solved by the JL- 10 advanced trainer at the lead-infighter phase.

By the time a PLAAF pilot is assigned to an operational unit, he or she will have undergone four years of academic and theoretical study and two to three years of flying training; a much longer training pipeline compared to that of the US Air Force.

Although definitive numbers are difficult to obtain, an average PLAAF pilot reportedly flies less than his or her American counterpart; PLAAF pilots average about 120 flying hours per year compared to an average of 250 in the US Air Force.