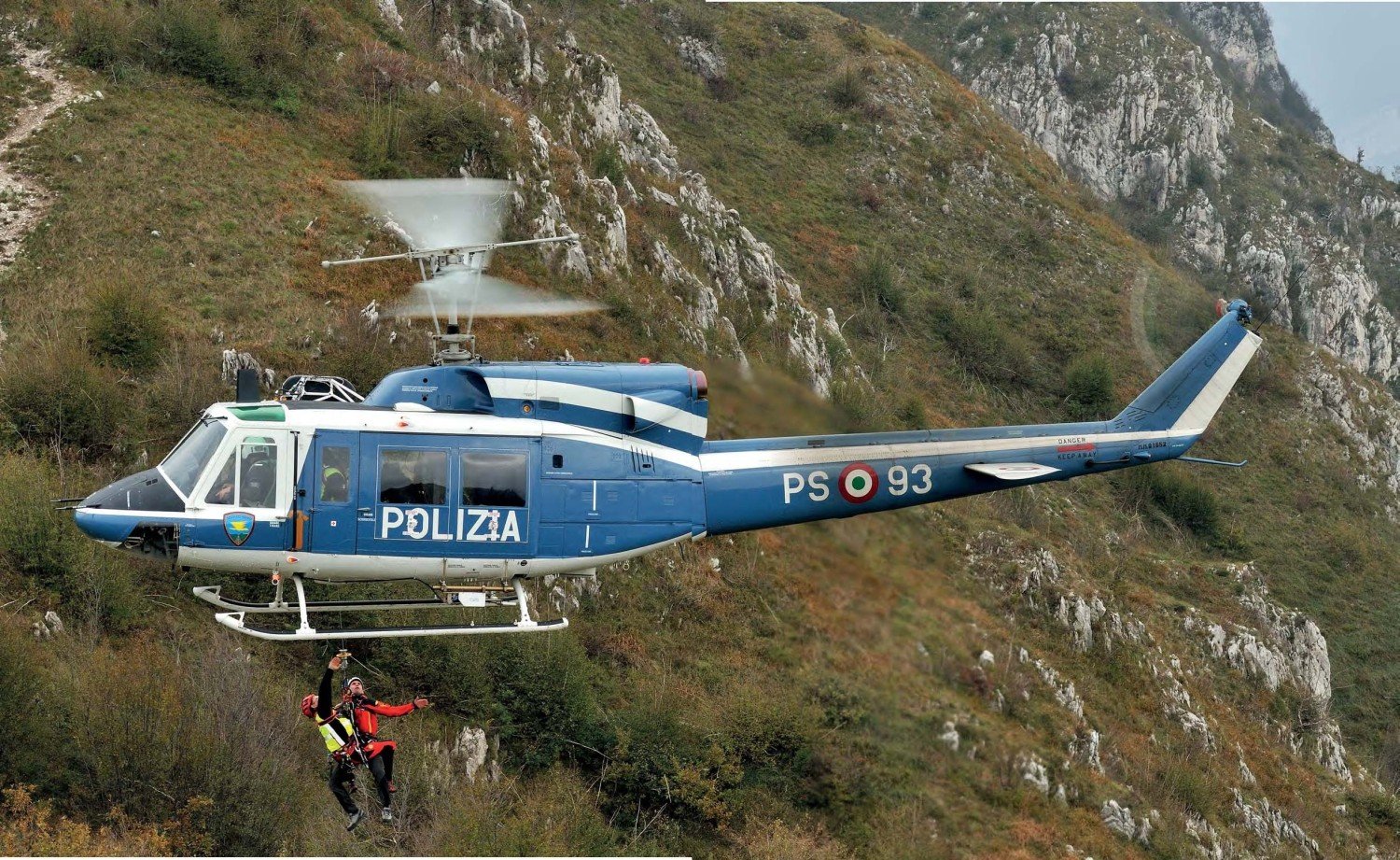 Police aviation in Italy began in 1956 when the Corpo delle Guardie di Pubblica Sicurezza (Guards Corp of Public Security) assisted the operations of rescue and evacuation of citizens hit by snow and floods in southern Italy.

Excited by the results, in 1959 the traffic police in Milan tested new joint activities with the support of helicopters. Due to the lack of crew, it was only in 1963 that aerial operations restarted in Milan and Rome, with the help of crew and helicopters made available by the Aeronautica Militare Italiano (Italian Air Force).

The P68 Observer II, powered by two Lycoming IO-360-A1B6 engines, is widely used for airborne policing and other governmental activities worldwide. The 2o Reparto Volo is equipped with a specific version with a glass fibre forward fuselage (incorporating three diverters for lightning strike protection) to give the crew enhanced visibility of the ground. The aircraft is also equipped with weather radar, a Bendix/King KFC 150 autopilot and an air conditioning system. The cabin can accommodate up to six crew and, due to its low fuel consumption rate, the P68 has an endurance of up to eight hours.

The bulk of the missions for the P68 fleet involve aerial surveillance and strengthening the coordination between police headquarters and car patrols, usually demanded during road accidents and heavy traffic jams.

Activities are not, however, limited to surveillance. Due to the relative high speed of the aircraft (up to 160kts/290km/h), it is also suitable for carrying out emergency medical services work, such as the transportation of plasma between main national hospitals. The aircraft’s characteristics permit landing and taking off on short runways and grass airfields, if needed, significantly reducing the transportation time of medical supplies.

The 2o Reparto Volo has three AB212s and an AB206. The AB206, although still in the force, is rarely used for surveillance activities, because of national law restrictions that do not allow single-engine helicopters to overfly urban areas.

There are 11 Polizia di Stato aerial units across Italy, which between them operate 60 helicopters and 17 fixed-wing aircraft. Simone Bovi

The AB212s are employed for daily surveillance patrols around Milan Malpensa International Airport and specific tasks demanded by the Ministry of the Interior. They are used to conduct close surveillance of specific civil airlines operating a group of flights deemed to have a high security risk during all the phases of landing, taxiing and take-off into Malpensa, to ensure the coordination for a quicker response with the ground police forces, should the need arise. This task is also carried out by other Servizio aereo della Polizia di Stato squadrons at other airports, according to the season and schedules of high-risk movements.

General surveillance is also provided for specific missions, where aerial observation provides a good aid for police forces working on the ground. The use of specialists onboard and the Wescam 14TS camera mounted in the AB212’s radome allows for a multi-task deployment, from aerial surveillance during sports events and public demonstrations to crime investigations. Recently, 2o Reparto Volo was also assigned to surveillance duties for big events such as the Milan Expo in 2015 and the G8 Summit.

The Wescam 14TS camera enhances interaction with ground forces by providing live footage to headquarters, which can be used immediately when prompt actions are required, and photographic reference in helping crime investigation activities. The camera is equipped with three sensors: two CCD colour image cameras (with a 955mm focal length and 10x zoom respectively) and one thermal sensor that provides night black and white images. 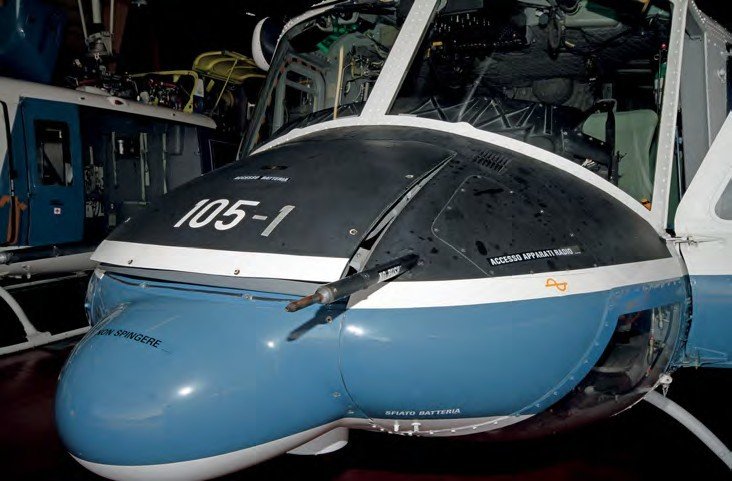 The Wescam 14TS mounted in the AB 212 has two CCD colour image cameras and one thermal sensor. Simone Bovi 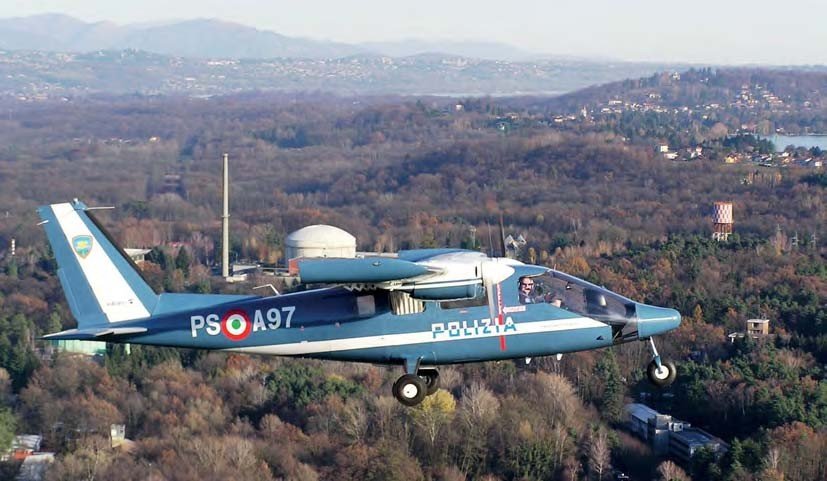 A single P68 Observer II is used by 2o Reparto Volo. Note the glass fibre forward fuselage to give the crew enhanced visibility of the ground. Polizia di Stato 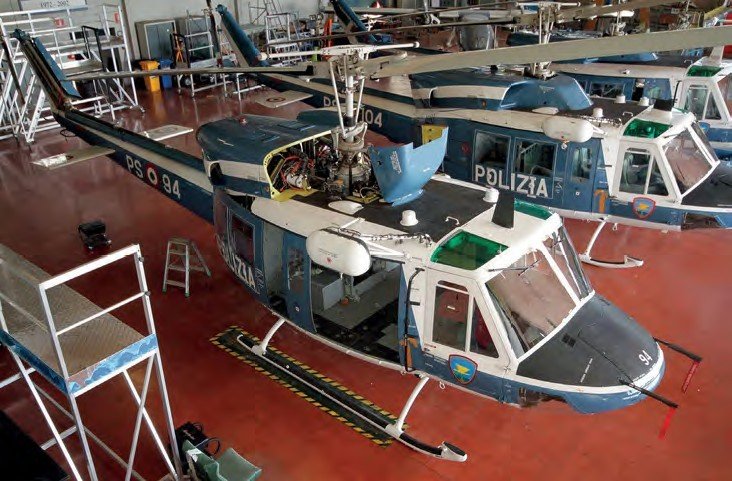 The camera is operated in the cockpit by a user-friendly joystick and the aerial images are displayed on screens mounted in both the cockpit and on the operator console. Images can be recorded through a video recorder or transmitted via UHF to the ground.

Interaction with other Polizia di Stato units has existed since the beginning of the aerial service and 2o Reparto Volo provides support for training activities requested by other police units for different roles, such as counterterrorism, law enforcement snipers, dog and bomb disposal teams. (The latter use the AB212 to carry disposal robots.)

Last September, the mountainous region of Trentino in northeast Italy hosted the tenth edition of Exercise Grifone, organised to test and consolidate the capabilities to plan and carry out complex rescue operations using rotary-wing fleets during day and night in arduous landscapes and scenarios.

The command and control of the operations was managed by a Rescue Coordination Team at the Poggio Renatico Centre, where the Comando Operazioni Aeree (Italian Air Operations Centre) is based.

The Aeronautica Militare provided logistics and planning through the support of 3° Stormo and 4° Brigade, testing its own capabilities for a quick deployment of means and personnel to a theatre of operations. A full operational airfield was set up in the area near the small town of Dobbiaco, providing all the necessary services for the flying activities, including military camps, a mobile communication system and control tower, fire-fighting units and weather station.

The participants comprised a wide range of aerial support units of national armed forces and civil corps. They were: 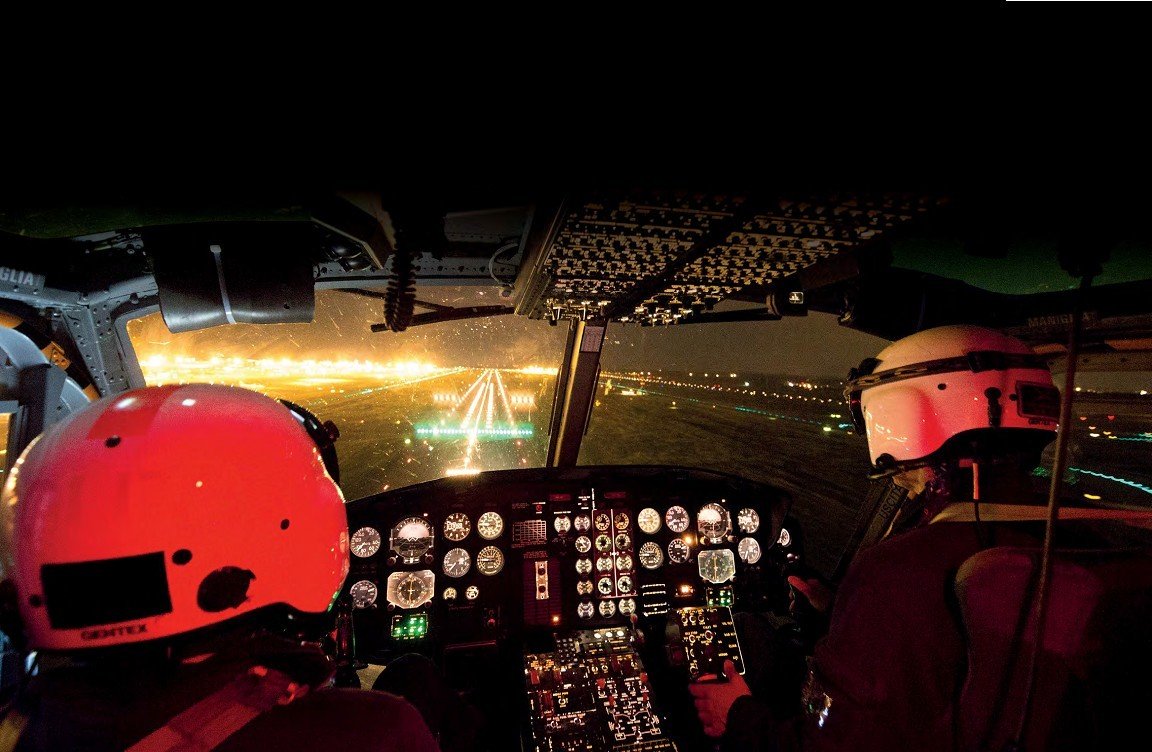 Surveillance is the primary role for the AB 212s and one of 2o Reparto Volo’s responsibilities is to monitor flights operating into Milan Malpensa deemed to have a high security risk. Massimo Sestini

The personnel involved in the operations counted more than 400 operators (flight crew and rescue teams), who trained together for four days to increase the mutual knowledge and application of common procedures used by Italian and foreign units and to support the best and safest way to undertake SAR operations at any time in a unique and challenging scenario.

On September 8, the 2o Reparto Volo AB212 participated in the planned scenario: rescue of survivors of an aircraft incident.

The SAR Coordination Centre triggered a red alert; five helicopters were assigned to the mission. The AB212 took off without delay, carrying one team from the Soccorso Alpino e Speleologico, along with the Aviazione dell’Esercito AB205, the Vigili del Fuoco AB212, the Guardia di Finanza AB412 and the 15o Stormo HH-139.

Once on scene, all the units were quickly deployed on the ground, except for the team carried by the Polizia di Stato helicopter, which were off oaded by winch, because of the harsh and arduous terrain below, After dropping all the units on the ground, all helicopters returned to base, allowing the involved teams to carry out their duties, supported by the help of trained dogs.

Once survivors were found, rescue teams contacted the SAR Coordination Centre to provide all the information for their rescue. Two helicopters were scrambled and after reaching the coordinated area rescued one survivor using the installed winch. The second survivor was picked up by the Aeronautica Militare HH-139.

Pilots assigned to 2o Reparto Volo are selected from candidates who successfully qualify to fly helicopters with 72o Stormo at Frosinone Air Base. Only on the completion of a second training phase for police duties at the Centro Addestramento e Standardizzazione Volo at Pratica di Mare do they obtain a full qualification for the aircraft type they will fly with the police.

Currently, 2o Reparto Volo has a total staff of around 60 people, who are divided into three main sections:

Section Affari generali: personnel with various tasks such as surveillance of the base and general affairs.

There has been no confirmation yet that the 2o Reparto Volo at Milan Malpensa will be equipped with new aircraft, but despite this uncertainty the activities of the unit have not changed in supporting the forces on ground, providing the same training needs and helping in the investigation of crimes, at any time.