AUSTRALIA’S P-8A introduction programme made news in July with the successful launch of a Harpoon missile during the multi-national RIMPAC exercise. While not a formal milestone, the event was a demonstration of the maturing maritime capability of the Poseidon in Royal Australian Air Force service.

The RAAF also played an important part in the successful demonstration of automatic air-toair Refuelling during June, with one of the service’s Airbus KC-30A Multi- Role Tanker Transport aircraft acting as the receiver during trials of the Spanish coast.

The Royal Australian Air Force used its participation in the recent RIMPAC exercise to ire a Harpoon missile at a surface target from one of 11 Squadron’s P-8A aircraft during July, 2018.

The event marked the first time that an RAAF has ired a Harpoon from its Poseidon aircraft, which entered service at the end of 2016. The inert ATM-84J training missile was ired at the former US Navy Landing Ship Tank USS Racine as part of a SINKEX held within the Paciic Missile Range Facility of the coast of Hawaii.

The strike was one of several delivered to the former USS Racine during the course of the exercise and the ship was inally sunk by the Los Angeles class attack submarine, USS Olympia.

The RAAF Poseidon programme achieved initial operational capability ive months ahead of the original schedule in March, 2018, and 11 Squadron is working up towards inal operational capability, currently scheduled to occur in 2022. While not a formal milestone towards FOC, Group Captain Darren Goldie, Oicer Commanding 92 Wing, said the Harpoon iring marked an important stage in the maturity of the Poseidon capability in the RAAF.

He said: “The opportunity to ire the Harpoon, as well as two Mk54 torpedoes, in the exercise is a real airmation of the progress we’ve made in the last 18 months, since delivery of the first aircraft.”

Group Captain Goldie added: “I think it’s yet another example of the acquisition going to plan and the capability being realised on or ahead of schedule.” 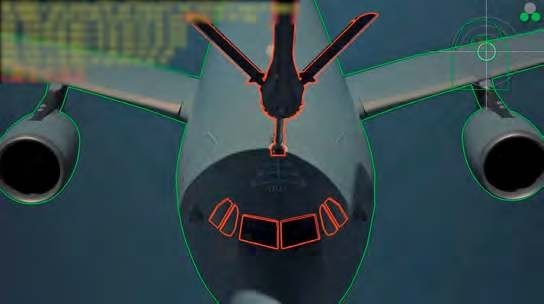 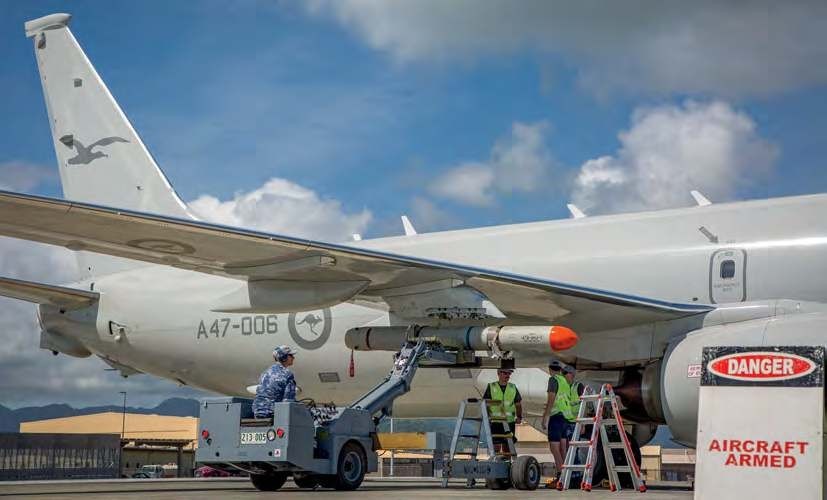 Group Captain Goldie continued: “It has been very successful and a real opportunity over several weeks to participate in a multi-national anti-submarine warfare exercise. With no air threat, it allows us to work with other nations, participating in everything from a single aircraft operating with a single submarine at periscope depth – as simple as it gets – right through to the other end of the spectrum, which is a multi-domain surface, sub-surface and air search for a surface or subsurface assets, and the appropriate prosecution at the end.”

Airbus Defence and Space announced on July 12, 2018, that it had successfully demonstrated automatic air-to-air refuelling (A3R) with a large aircraft as the receiver, following earlier trials with a Força Aerea Portuguesa (Portuguese Air Force) F-16 ighter.

The trials were carried out on June 20, 2018 of the Spanish coast and the receiver was a KC-30A aircraft from 33 Squadron RAAF, which had deployed from Amberley to Getafe. Seven automatic contacts were performed between the KC-30A and Airbus Defence and Space’s A310 MRTT test bed.

The RAAF’s Aircraft Research and Development Unit is working with Airbus Defence and Space to develop the A3R capability and the KC-30A is likely to be the first operational MRTT variant to ield the system.

ARDU Executive Oicer, Squadron Leader Lawry Benier said: “It’s very encouraging to come to Spain to see the progress that has been made with A3R and be able to witness it first-hand refuelling our KC-30A.”

He added: “Refuelling large receivers is a role the RAAF has conducted extensively on operations and exercises, allowing us to extend the reach and responsiveness of our air mobility leet, as well as keep surveillance aircraft in the air for longer.”

In related news, the RAAF was working during later July and early August to clear Indian Air Force Sukhoi Su-30MKI and Royal Malaysian Air Force F/A-18D Hornet ighters to routinely receive fuel from the KC-30A. The clearances are being undertaken with Exercise Pitch Black 2018, the RAAF’s largest air combat exercise, held in the Northern Territory in July and August. Subject to the successful conclusion of the work, the KC-30A involved in the exercise will support the deployment of both aircraft to RMAF Base Butterworth after the exercise winds up.