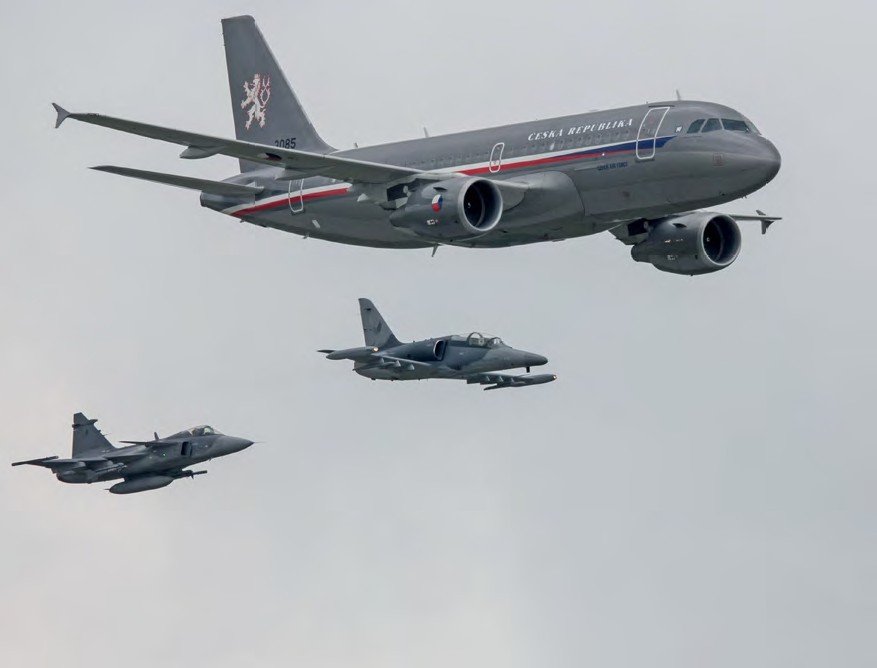 A JAS 39C and an L-159A escort A319CJ serial 3085 (c/n 3085) from the 241. dopravní letka (241st Transport Squadron). The primary role of the 241st is transport of government o_ icials and units of the Czech Army at home and abroad. Other duties include carrying NATO personnel or special flights on behalf of the Czech Republic security agencies. Acquired in 2007, the A319CJ can be outfitted with medical equipment for humanitarian operations to evacuate Czech citizens from conflict areas. The 241. dopravní letka inventory includes two A319CJs, two Yak-40s and a single CL-601 Challenger. C295M serial 0453 (c/n 069) from the 242. transportní a speciální letka (242nd Transport and Special Squadron) taxies at Prague-Kbely. The 242nd is responsible for transporting troops and materiel, as well as medical evacuation. The C295M – which has been stationed at Kbely since 2010 – is also used to support UN international observer missions. The squadron has four C295Ms, four L-410UVP-Es and a pair of L-410FGs. Another two C295Ms are on order for delivery in 2020. All photos Bernd Kienle

This month, AFM contributor Bernd Kienle provides a photographic report from the 24. základna dopravního letectva (24. zDL, 24th Transport Aviation Base) in Prague-Kbely, in the northeast of the Czech capital, where plans for the construction of a military airfield were laid as long ago as November 1918. Today, the base is home to the fixed-wing transport arm of the Vzdušné síly Armády Ceské republiky (VzS ACR, Air Component of the Army of the Czech Republic). Since the country’s accession to NATO in 1999, the transport fleet has been extensively modernised and the base is home to three squadrons.