Power to the MAX 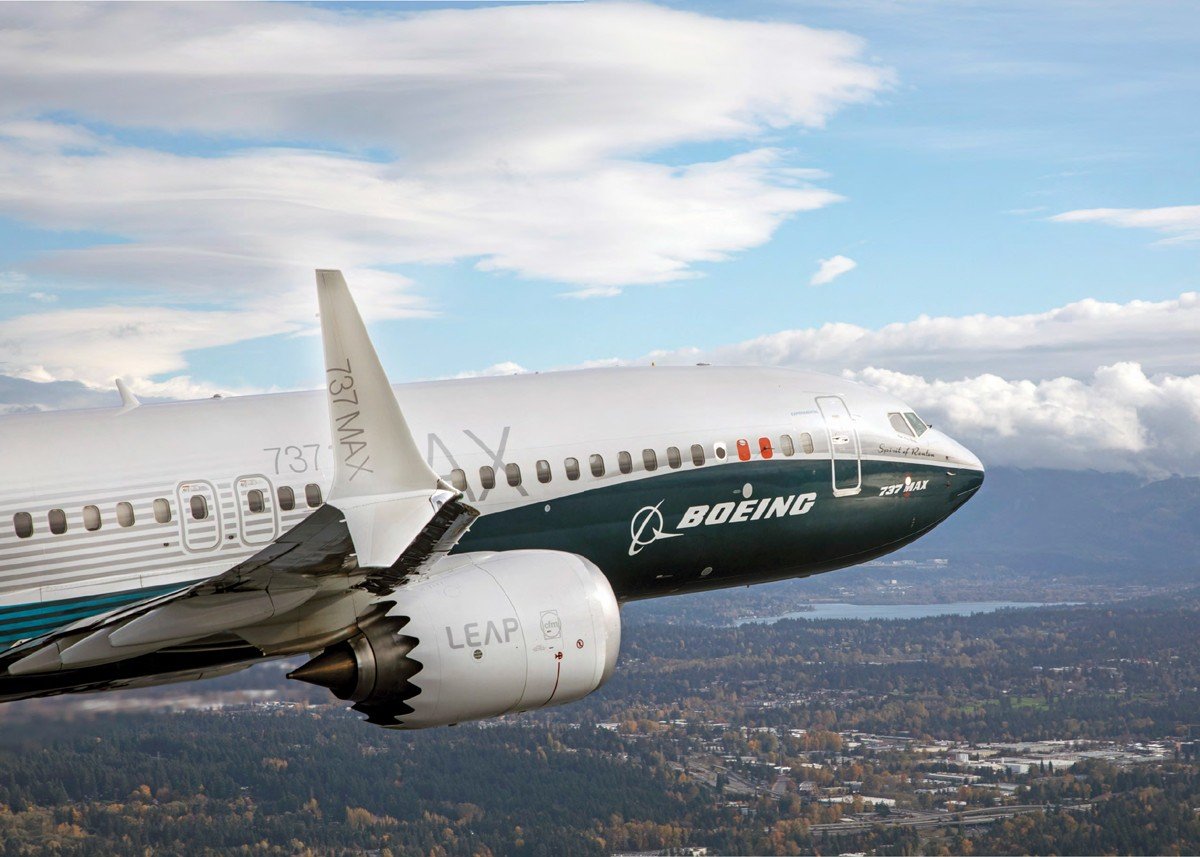 Although just one of three versions of CFM International’s new LEAP mid-sized turbofan engine, the LEAP-1B powering all Boeing 737 MAXs will almost certainly be the most-produced version of the fastestselling commercial-turbofan engine in history.

By the end of November 2016, just eight years after CFM had launched design and development of the LEAP family, CFM – a joint venture between GE Aviation and Safran Aircraft Engines – had won firm orders and other commitments for some 11,500 LEAP engines. As of that date, Boeing had received firm orders for 3,346 twin-engine 737 MAXs, so simple arithmetic shows that, as of November 30, LEAP-1Bs accounted for more than 58% of all LEAP family orders.

Ground testing of the first LEAP-1B began on June 13, 2014, at Safran Aircraft Engines’ test facility at Villaroche near Paris. The programme involved 12 LEAP- 1B development engines, tests being performed both in France and the United States. Kris Shepherd, GE Aviation’s LEAP-1B programme director (he has a counterpart at Safran Aircraft Engines), said each development engine underwent “probably two to three builds” for different tests, some of which were severe on the engines.

The LEAP-1B flew for the first time on April 29, 2015, installed on GE Aviation’s Boeing 747 flying testbed. By this point, CFM had started building “compliance” engines, configured to a standard suitable for type certification. The next major event in the LEAP-1B flight-test programme came on January 29, 2016, when the first 737 MAX 8, powered by two LEAP-1B compliance engines, performed its first flight.

On May 4, the FAA and EASA each awarded type certificates to the LEAP-1B, allowing 737 MAX 8 flight testing to continue in line with its planned type certification and entry into service by the third quarter of 2017.

Shepherd said that, by December, CFM had made 18 LEAP-1B compliance engines. Once Boeing obtains type certification for the 737 MAX 8, CFM hopes to reconfigure some for subsequent 737 MAX 9 and 737 MAX 7 certification flight testing, “if the schedule permits,” but it will probably have to deliver another four to six compliance LEAP-1Bs to Boeing.

Eventually, Boeing will require many more production LEAP-1Bs annually than that. The manufacturer plans to increase its monthly 737 production rate to 57 aircraft by 2019 and is reportedly considering increasing it to 60 or more a month in the early 2020s. By then, almost all 737s manufactured will be MAXfamily aircraft.

At a monthly production rate of, say, 57 737 MAXs, CFM would need to deliver 1,374 LEAP-1Bs a year for installation on new aircraft – and that number doesn’t take into account spare engines required for a growing LEAP- 1B spares pool. Shepherd said: “We obviously will support the fleet with spare engines.” Therefore one might assume that by the early 2020s CFM will be manufacturing at least 1,400 LEAP-1Bs annually – a rate of 116.67 engines a month.

CFM’s production plans call for it to manufacture 2,000 LEAP engines of all versions in 2020 and then – if sales demand permits – increase the rate to as many as 2,200 a year by the early 2020s. Not only are these the highest annual production rates ever planned by any manufacturer of commercial aircraft turbofan engines (CFM’s 1,700-engine production in 2016 is the current record), but they also involve by far the most intensive production rampup: CFM plans to go from about 100 LEAP engines delivered in 2016 to 2,000 in just four years. 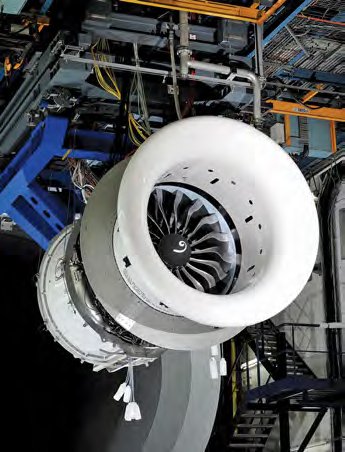 The first LEAP-1B engine to test. All photos CFM International unless stated

At a probable annual rate of 1,400 engines by the early 2020s, LEAP-1Bs will represent about two-thirds of all LEAP production. At present, GE Aviation is delivering all LEAP- 1Bs, with Safran Aircraft Engines delivering all LEAP-1As and most LEAP-1Cs. However, because the CFM joint venture agreement calls for both partners to assemble equal numbers of engines, and most LEAPs will be LEAP-1Bs, Safran Aircraft Engines inevitably will assemble production LEAP-1Bs as well.

Shepherd said Safran Aircraft Engines will begin assembling LEAP-1Bs in the second half of 2017, on either of two (possibly eventually three) LEAP lines at its Villaroche final assembly facility. Safran-produced LEAP- 1Bs will be pre-delivery tested there and then flown to Seattle on commercial freighters. GE Aviation’s LEAP-1B production will continue to come from its two LEAP lines, at Durham in North Carolina and a recently opened line in Lafayette, Indiana. All GE-assembled LEAP- 1Bs are pre-delivery tested at GE Aviation’s test centre in Peebles, Ohio and delivered from there. 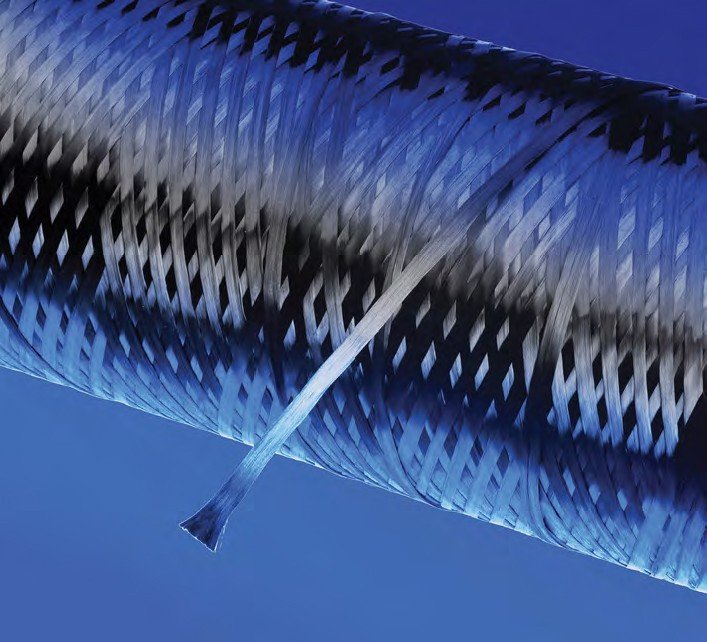 Each LEAP fan blade contains 7km (4.35 miles) of carbon fibre strands, and each strand is made up from many interwoven, individual carbon fibre filaments.

LEAP-1B Differences vs Other LEAP Versions

Like its sister engines the LEAP-1A and LEAP- 1C (both of which are identical internally, but differ from the LEAP-1B), the LEAP-1B incorporates a number of commercial turbofan technological firsts. In the LEAP-1B’s case, these advances are intended to allow a fuel efficiency improvement of 15% over its predecessor, the 737NG’s CFM56-7B, and despatch reliability of 99.98% – a rate as high as that which the CFM56 family, legendary for operational reliability, has achieved over 30 years of service.

However, no LEAP engine will share one part number in common with any CFM56; the LEAP is an entirely new design. Nor does the LEAP-1B share many part numbers with its sister LEAP engines. It has a smaller fan diameter, a slightly smaller core diameter, one fewer fuel-injection nozzle and two fewer lowpressure turbine (LPT) stages than the other two LEAP versions.

Shepherd said Boeing’s requirement for a lower thrust range and a smaller fan diameter meant CFM could dispense with two of the seven LPT stages the other two LEAP versions boast. Because the LEAP-1B was different from its siblings, CFM could design the LEAP-1B to be “fully optimal for the Boeing application … but the whole philosophy behind the design is very similar” to that for the LEAP-1A and LEAP-1C: to be very fuel efficient, reliable and durable.

CFM aimed to achieve these qualities in its LEAP engines by incorporating new technologies, at the same time making each LEAP engine bigger and more complex than the relatively simple CFM56 designs. Behind the fan, each LEAP engine has a three-stage low-pressure compressor (LPC), a ten-stage high-pressure compressor (HPC), a new TAPS II combustor (the LEAP-1A and LEAP-1C’s combustors each having 19 fuel-injection nozzles, but the smaller LEAP-1Bs 18), two high-pressure turbine (HPT) stages and seven LPT stages (five in the LEAP-1B).

One major technological advance in the LEAP-1B is its fan. For the first time in any commercial-aircraft engine as small as the mid-size LEAP, the entire fan, including all 18 blades, is made of carbon fibre. Not only does this make the fan assembly much lighter than a conventional metal fan would be, but it also makes it much stronger, said Shepherd.

Made by Safran Aircraft Engines at facilities in France and New Hampshire, all LEAP fan blades are of what GE Aviation calls “fifthgeneration” carbon fibre blade design. (Previous generations began with the original GE90 and continued through the GE90-115B and the GEnx.)

Manufactured using a technique called woven resin transfer moulding, each LEAP fan blade is made up of complex layers of carbon fibre strands. These are woven on gigantic Jacquard looms (LEAP manufacturing thus incorporating a 21st-century take on a 19thcentury technology) into a three-dimensional, aerodynamically efficient aerofoil and then are strengthened by impregnation with resin.

So complex is the layering of the carbon fibre strands that, according to François Bastin, Executive Vice-President of CFM, it allows each fan blade to “untwist” in a specific, controlled way as the blade rotation rate varies, modifying the blade’s aerodynamic characteristics to provide optimal propulsive efficiency during different phases of flight.

According to Bastin, each LEAP fan blade contains 7km (4.35 miles) of carbon fibre strands. (Each strand is made up from many interwoven, individual carbon fibre filaments.) After autoclave curing, each blade is so strong that, if an Airbus A350 XWB widebody could be slung from it, the blade wouldn’t break. 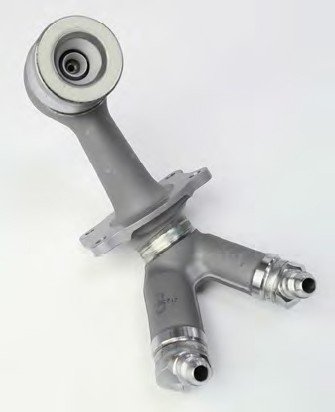 The LEAP-1B has 18 fuel-injection nozzles.

The use of ceramic matrix composites in the first-stage high-pressure turbine shroud is a first in any commercial engine.

Another technological advance in the LEAP design is a debris rejection system located between the LPC and HPC modules. Adopted from GE Aviation’s GE90 design, this consists of eight variable-bleed valve doors that, upon engine spool-up, open automatically inward into the core airstream. These doors deflect all sand and other foreign-object debris out into the bypass airstream before it enters the core, preventing any foreign object debris from damaging the HPC stages’ 3-D aerofoils.

Next as a technological advance is the highly aerodynamically optimised HPC module, which Shepherd said produces about half of the LEAP’s overall efficiency improvement compared with the CFM56. The first five stages of the ten-stage HPC are onepiece blisks, reducing parts count and weight and improving durability. The HPC module generates a 22:1 pressure ratio, creating an overall pressure ratio of 40:1 from the fan to the combustor at take-off power.

The TAPS II combustor is particularly notable in that each fuel injection nozzle is made by an additive manufacturing process that uses a laser to melt metal powder into a liquid spray that is then deposited a layer at a time on to the preceding layer. Shepherd said: “This was a big deal for us to demonstrate in a commercial engine … we see a lot of runway for that [technology]”, for potential use in incrementally improving LEAP engines and in manufacturing new designs.

Yet another new technology in LEAP engines is the use, for the first time in any commercial engine, of ceramic matrix composites (CMCs) in the first-stage HPT shroud. Ringing the first HPT rotating stage, this shroud is made from 36 interlocking CMC parts that are not only much lighter than traditional metal alloy parts, but also require very little cooling, where alloy parts would need complex cooling-air circuits and lots of cooling air bled from the HPC.

Reducing this requirement has allowed CFM to use bleed air from the HPC more efficiently. One key use has been to provide cooling-air circuits to the HPT casing, the cooling air acting to increase the clearance between the HPT stages and the casing during low-thrust operations, increasing engine efficiency.

Another technology CFM has introduced in the LEAP – for the first time in any commercial engine – is to modulate, by means of the FADEC 4 software controlling the engine’s operation, the amounts of bleed-air cooling going to the HPT stages’ cooling-air circuits during different phases of flight.

The HPT stages need much more cooling air when the engine is operating at maximum thrust during take-off and initial climb than they do during low-thrust cruise and descent. By modulating the amounts of bleed air used for HPT cooling, CFM has further increased LEAP efficiency.

1. By 2020, CFM expects to manufacture at least 2,000 LEAP engines a year, more turbofan engines than any company has ever made annually. By then, more than half of all LEAP engines assembled will be LEAP-1Bs.

3. The CFM joint-venture agreement calls for Safran Aircraft Engines to make the fan, LPC compressor and LPT modules for all LEAP engines and for GE Aviation to make all high-pressure modules (the engine core). Each partner will assemble half of all LEAP engines ordered.

4. Each LEAP-1B carbon fibre fan blade contains 7km (4.35 miles) of carbon fibre strands and the blade is so strong that an entire A350 XWB could be slung from it without it breaking.

For CFM, Boeing and Boeing’s many 737 MAX customers, the LEAP-1B represents a highly important new engine that will become central to their operations. So much is at stake in ensuring it enters service smoothly – a feat CFM appears to be achieving with the LEAP-1A – that CFM and Boeing have to make that their biggest priority, according to Shepherd: “There’s a massive joint effort with Boeing and CFM to make sure everyone is ready for entry into service.” Chris Kjelgaard 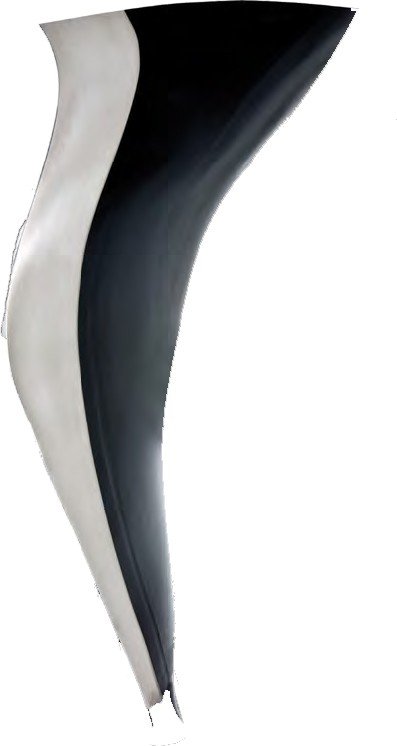 Manufactured using a technique called woven resin transfer moulding, each LEAP fan blade is made up of complex layers of carbon fibre strands. 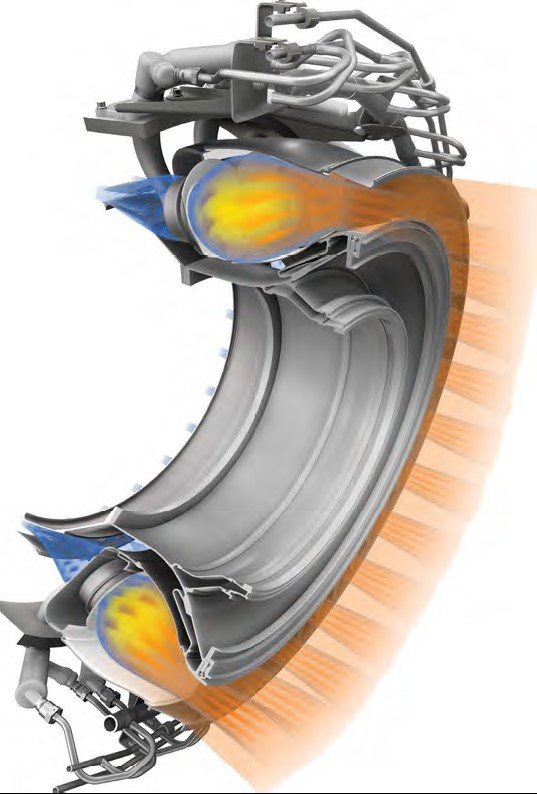 The TAPS II combustor is particularly notable in that each fuel injection nozzle is made by an additive manufacturing process.