Ian Frain provides a brief overview of police aviation in the UK, which today is based around Airbus helicopters

POLICE AVIATION IN THE UK: THE BEGINNINGS

In 1921, the R33 and R36 airships were used to assist the police force with traffic control around the Ascot and Epsom horse racing events. An aerial balloon was used by the police force in the 1924 Epsom Derby and nine years later the Metropolitan Police first used an autogyro to patrol that year’s Derby. Subsequently the Cierva autogyro was demonstrated to police forces.

It was in 1947 when a helicopter was first used to support a police operation. The Norfolk Constabulary was searching for a fugitive and were helped by a civilian Sikorsky S-51 Dragonfly flown by the late Alan Bristow (who founded Bristow Helicopters).

Later, in 1968, there were four experiments in the country to evaluate the use of helicopters in airborne law enforcement. Scotland played host to one of these trials that took place between February and March that year. These included using an Army Air Corps Westland Scout AH1 helicopter flown by an army pilot and a police observer of inspector and sergeant rank to be based at RAF Kinloss.

During the 2012 Olympics, there was a brief return to the use of military aviation assisting the authorities when elements of the armed forces, namely the battlefield helicopters of the Joint Helicopter Command and Royal Navy helicopter squadrons, provided airborne security to protect the event alongside the Metropolitan Police Air Support Unit. More recently, in response to the terror attack on Westminster Bridge in May 2017 the Joint Special Forces Aviation Wing deployed an AS365N3 Dauphin.

Airborne policing in the UK has come a long way from the early days of using an airship and autogyro in the early part of the 20th Century. Enforcement from the air as we would recognise it began with experiments in the 1960s and 1970s when the Army Air Corps provided a Bell 47 Sioux or a Westland Scout to the various police constabularies around the country. The army would fly and operate the helicopter, but there would be a police observer present.

A decade later the then Colt Cars operated a single Aerospatiale AS350A for the Devon and Cornwall Police Constabulary, while in London the Metropolitan Police Air Support Unit (ASU) started to operate the twin-engine Bell 222A. By the end of the 1980s and into the 1990s, nearly all forces were covered by an ASU, with the favoured helicopters being the MBB Bo105 and Bk117 and the Eurocopter AS355F/AS355N Twin Squirrel.

Newly developed technology has been implemented in the pursuit of better law enforcement since police helicopters entered service, from the GEC Avionics Heli-Tele system mounted on the Metropolitan Police Bell 222As in the 1980s for closer monitoring of the ground from the air, to experiments in the 1990s with night vision goggles.

The missions of the regular ASUs were not limited to just airborne surveillance and command and control for the police on the ground; they also had a secondary air ambulance role. The Sussex, Cambridge and Wiltshire constabularies all operated MD Helicopters MD900s or MD902s in the helicopter emergency medical service (HEMS) role. The latter unit worked together with the Wiltshire Air Ambulance Trust (established in 1990) and the South West Ambulance NHS who supplied the paramedics. The Wiltshire Air Ambulance Trust, a charity, used the money raised to fund a third of the police MD902’s operating costs under the agreement. 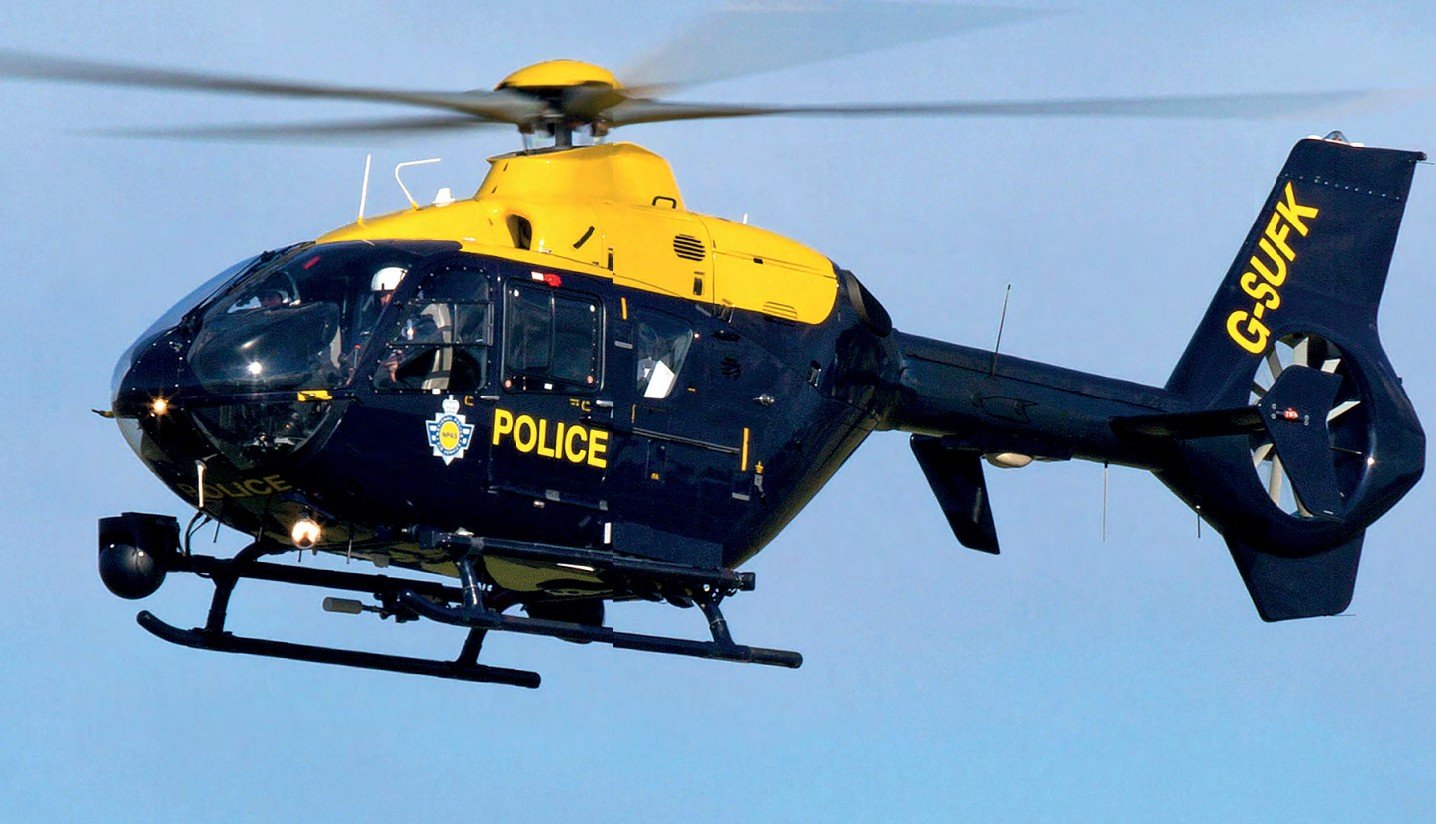 Airbus Helicopters H135s, comprising both EC135P2s like G-SUFK (msn 0730) pictured here and upgraded EC135T2s, make up most of the police helicopters operated in the UK.
Dave Sturges/AirTeamImages

Unlike a lot of police ASUs around the world, such as those in the United States, the police pilot in the UK tends not to be a sworn police officer but a commercial contract pilot. Like the aircraft, the mission equipment role fit and the maintenance support, pilots come from a major helicopter operator such as Bristow (which supplied the pilots for the Metropolitan Police ASU Bell 222A operations), Bond Helicopters (which supplied pilots to the likes of the Strathclyde Police) and Specialist Aviation Services, formerly Police Aviation Services, which supplied the MD900/MD902 Explorer to various forces.

Airbus Helicopters based at Oxford Airport at Kidlington (formerly known as Eurocopter UK) also designed and installed a special mission pod for the police EC135 from around 2001 onwards, which was then also used by some other police forces. This included an under-fuselage surveillance pod with night and day channels, forward-looking infrared, a multi-sensor turret, a searchlight, a loudspeaker address system and secure communications with a microwave voice and data downlink.

At one time, two smaller operators, the Cambridge and Stapleford Tawney based Aeromega and Norwich Sterling Aviation in East Anglia, also provided pilots. Aeromega supplied the pilots for the Cambridge, Essex and Suffolk forces, while Sterling provided an AS355 for the policing of Norfolk.

In the aftermath of 9/11 with the effects of organised terrorism felt across the world, the need to counter the new threat was made a priority by the police forces around the country. By mid-2003, the rotary-wing assets of the UK were predominantly from Eurocopter, namely the EC135, AS355F/ AS355N and MD900/MD902 Explorer. The only exceptions were the Devon and Cornwall Constabulary, which operated a sole MBB Bk117C, and Dyfed Powys Police, which flew one AgustaWestland AW109E (replacing a previously damaged AW109E Power) supplied by Sloane Helicopters of Northamptonshire.

The newest additions to the UK fleet have been from Airbus Helicopters. The Metropolitan Police ASU was the first customer for the EC145, also known as the H145, at the end of 2006, followed later by the Devon and Cornwall force and the Police Service of Northern Ireland (PSNI).

During 2009, the Association of Chief Police Officers looked back at the air operations strategy, which had then been in existence for 16 years since its inception in 1993. Subsequently, it was decided the current strategy and structure was fragmented and thus not cost-effective.

The new National Police Air Service (NPAS) was officially launched in October 2012, with changes starting to take shape almost immediately. The first of these was the centralisation of control of all air assets from the NPAS Operations Centre in Wakefield, Yorkshire. Prior to this all mission tasking was carried out by the police force in its own county.

Several bases were closed, taking it to a 15-base model, and consequently there was a reduction in aircraft numbers. Currently, these remaining bases across England and Wales operate two types of helicopters, the Airbus H135 and H145, covering a vast area.

With the MD900/MD902 removed from the NPAS fleet, there is now no secondary HEMS role, which is only carried out by the air ambulance charities and, to a lesser extent, the Maritime and Coastguard Agency helicopters.

The Airbus H135 (EC135T2/EC135T2+ powered by Turbomeca Arrius 2B2, or EC135P2+ powered by Pratt & Whitney PW206B), which form the bulk of police aviation in the UK, is widely used for airborne policing globally and arguably is the benchmark for law enforcement, especially in Europe. It is single pilot instrument flight rulescertified.

The avionics package includes the Nouvelle centre panel display system and flight control display system, and the helicopter is equipped with the latest surveillance technology such as forwardlooking infrared, a Nightsun 30 millioncandle power searchlight, the Skyforce aerial mapping system (which has a complete address database built in) and a public address system. The crew complement is a pilot and two observers, one in the left-hand seat and one in the back, who is the main observer responsible for mission management and for tracking people or vehicles of interest.

The larger Airbus Helicopters H145 (formerly EC145 and also referred to as Bk117C2, derived from the Bk117C1) used by the Metropolitan Police and PSNI is powered by Turbomeca Arriel 1E2 turboshaft engines. The aircraft are equipped with the Wescam MX-15 imaging sensor, the Skyquest touchscreen video management system and Gigawave digital video link. The larger size of the H145’s cabin means apart from the pilot and two observers, there is the ability to carry up to another three personnel and even with police dogs. 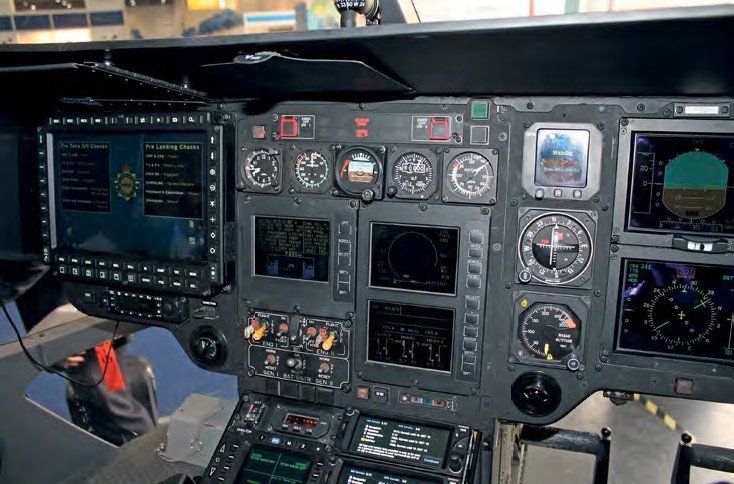 The Metropolitan Police ASU, one of the three H145 operators, is the only one in the country to have a permit to fast-rope officers in tactical situations, common practice with ASUs in the United States and Europe.

The Metropolitan Police ASU, known as NPAS London since 2015 and based at Lippets Hill in Essex, was established in 1980 with a trio of Bell 222As (the only unit in the country to do so) and after 13 years flying the type the ASU replaced it with the Eurocopter AS355N Twin Squirrel, flown for another 13 or so years until 2007. The unit was then the first operator of the H145 in July 2007 and subsequently the first to have the Skyquest management system, a key part of which is the open architecture adaptable system. Devon and Cornwall became the second unit with this new technology when it took delivery of the H145 in 2010.

At the end of April 2016, a pair of the NPAS London H145s had the distinction of escorting elements of Marine Helicopter Squadron 1 (HMX-1) including Marine One Sikorsky VH-3D and MV-22B Ospreys, on an orienteering rehearsal flight into London from RAF Mildenhall in Suffolk. This was in support of President Barack Obama’s last visit to the UK. 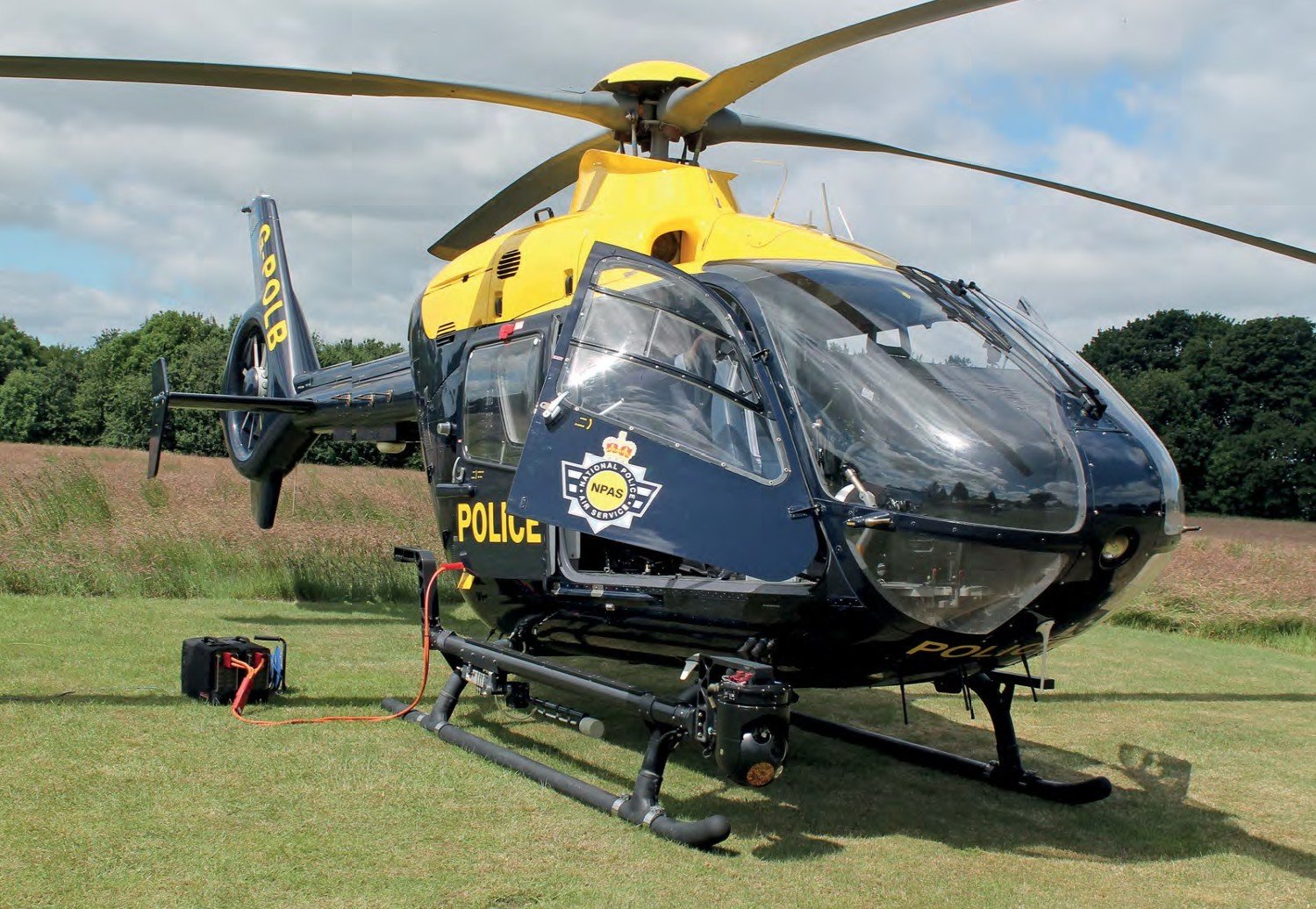 EC135T2+, G-POLB (msn 283), was the first of seven upgraded EC135s handed over by Babcock MCS (Mission Critical Service) to the National Police Air Service.
All photos Ian Frain unless stated

There is a growing trend in the use of unmanned aerial vehicles for corporate and individual private use. The airborne law enforcement community around the world especially in the United States, is embracing the technology to complement their air assets. In the UK, Wiltshire Police (which lost its ASU) launched an Unmanned Aviation Support Group with a team of trained Special Constabulary Officers and one regular police officer holding Civil Aviation Authority licences.

The forces of Cambridgeshire, Bedfordshire and Hertfordshire conducted a successful nine-month trial of UAVs and subsequently introduced them into service in June 2016.

In July 2017, the Devon and Cornwall and the Dorset Police launched the UK’s first operational drone unit after nearly two years of trials that had started in November 2015.

The unit is equipped with six DJI Inspire systems, which are equipped with a HD/4K zoom camera and thermal imaging to allow for 24-hour operations.

Only a few police forces in the UK operated the fixed-wing Britten Norman Defender high-wing twin-engine aircraft, the most recent operator being Greater Manchester Police, whose ASU operates an H135 and is now known as NPAS Barton, as the unit operates from City Airport Manchester at Barton.

In 2014, the NPAS awarded a contract to deliver four P68R twin-engine aircraft produced by the Italian company Vulcanair SPA to the Austrian company Airborne Technologies. These four aircraft will be equipped with the Wescam MX-10 imaging system and Churchill navigation augmented reality system and will complement the Airbus Helicopters fleet operated by NPAS.

The role of the police aviation in the UK has not changed in supporting the authorities on the ground by way of surveillance, assisting in emergencies, tracking fugitives and investigating crimes or accidents. The constantly evolving technology in airframes and sensor technology over the decades is also helping to preserve law and order for now and the future. 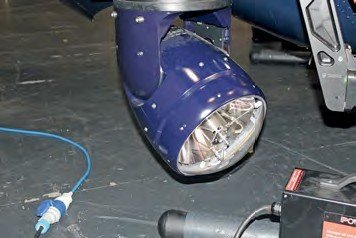