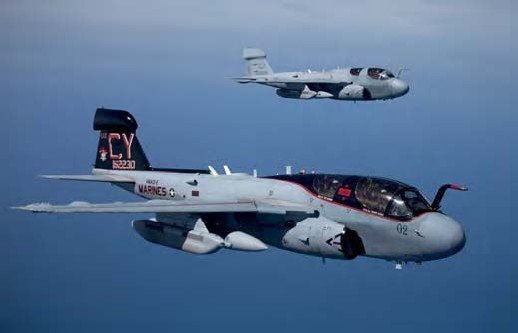 EA-6B Prowlers BuNo 162230/CY02 and 162228/CY04 assigned to Marine Tactical Electronic Warfare Squadron 2 fly off the coast of North Carolina, on February 28, 2019, one of the squadron’s last flights prior to its deactivation on March 8, 2019.
Lance Cpl Liam Higgins/US Marine Corps

The last US Marine Corps unit to operate the Grumman EA-6B Prowler, Marine Tactical Electronic Warfare Squadron 2 (VMA-Q) ‘Death Jesters’, cased its colours in a ceremony at Marine Corps Air Station Cherry Point, North Carolina, on March 8, 2019. Only two jets remained in service with the squadron at the time of the ceremony, BuNo 162228/CY04 and BuNo 162230/CY02, the latter painted in a high visibility colour scheme. The two aircraft were flown out of Cherry Point, one on March 12 to a museum in Texas and one on March 14 to the National Air and Space Museum at Dulles, Virginia. VMAQ-2 returned to Cherry Point in November from its final deployment to Al Udeid Air Base, Qatar, in the US Central Command area of responsibility. The US Navy stopped flying the Prowler, after 45 years, in 2015. The US Marine Corps held on to its Prowlers longer. First to go was VMAQ-1 ‘Banshees’ on April 29, 2016, VMAQ-4 ‘Seahawks’ on June 2, 2017 and VMAQ-3 ‘Moondogs’ on May 11, 2018.

The Marine Corps is not fielding a direct replacement for the EA-6B, instead relying on other platforms like the F-35B, organic electronic warfare systems such as the Intrepid Tiger pod, unmanned air vehicles, and the Navy’s EA-18G Growler-equipped electronic attack squadrons.

The Prowler entered combat with the US Navy’s Tactical Electronic Warfare Squadron 132 (VAQ-132) during 1972 over North Vietnam and served in numerous conflicts and crises since, most notably Operations El Dorado Canyon, Desert Storm, Southern Watch, Allied Force, Desert Fox, Enduring Freedom and Iraqi Freedom. Electronic Attack Squadron 134 (VAQ-134) ‘Garudas’ was the last to go on June 30. Like 14 other Navy squadrons it converted to the EA-18G Growler. Rick Burgess