On March 8 the aviation world said farewell to both the last airborne electronic warfare squadron in the US Marines Corps – VMAQ-2 ‘Death Jesters’ – and its well-used but still trustworthy platform, the EA-6B Prowler. Joe Campion reports from North Carolina. 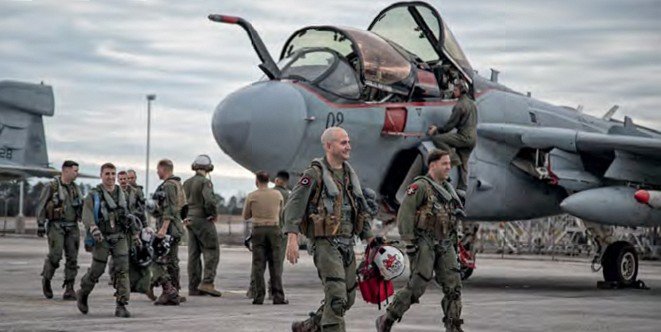 VMAQ-2 aircrew are welcomed back after the final two-ship display. By February only four pilots and 12 ECMOs remained on the squadron, but proficiency flying continued.

Marine Tactical Electronic Warfare Squadron (VMAQ) 2 – motto ‘Can Do Easy’ – was part of the 2nd Marine Aircraft Wing (MAW) of the US Marines Corps. The squadron was founded as a composite unit, VMC-2, in 1952, becoming VMCJ-2 three years later. This change coincided with the publishing of the first issue of Playboy magazine and the squadron used the famous ‘Playboys’ nickname between 1955 and 1993. The squadron adopted its latest designation in 1975 and took part in aircraft carrier deployments on board the USS Midway, Nimitz, America and Saratoga. During its history, the unit flew aircraft types including the AD-5 Skyraider, EF-10 Skyknight and EA-6A Intruder. In 1977 it became the first Marine Corps squadron to transition from the EA-6A to the EA-6B