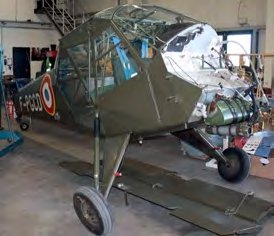 The Quax-Flieger club’s latest hangar open day at its headquarters at Paderborn-Lippstadt, Germany, on 6 May revealed a new acquisition: Nord NC856A F-PGCD, which had arrived during April. The rare 1950s French Army machine — only four examples of which are flying worldwide — is now owned by three of the club members and is expected to fly again later this year. The engine, a 160hp SNECMA-Régnier 4 LO 8, is being overhauled.

Meanwhile, Quax-Flieger’s Bücker Bü 180 Student, D-EUTO — the sole airworthy example of only two survivors of this late 1930s monoplane trainer — was one of the stars of the static park at the ILA Berlin Air Show at Berlin Brandenburg Airport at the end of April.