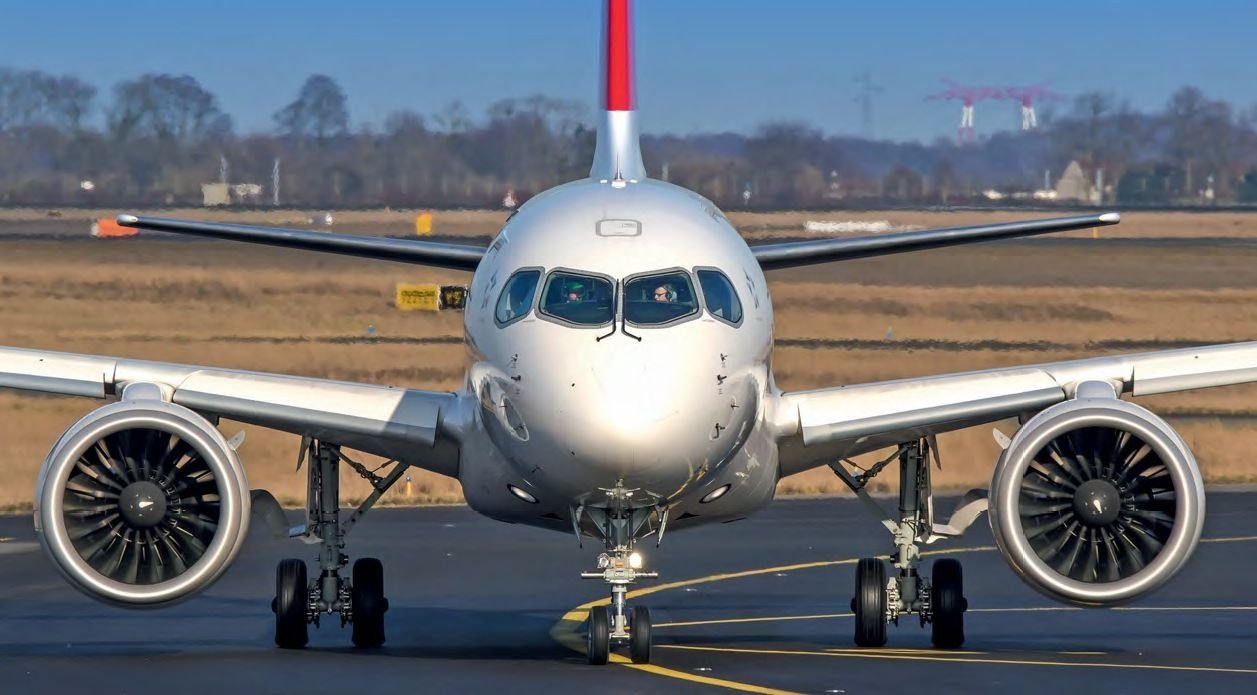 When the first Bombardier CS100 flighttest aircraft took off on its maiden flight from Mirabel Airport near Montréal on September 16, 2013, many among the thousands of spectators gathered to watch the first flight of Bombardier’s new mainline commercialjet family didn’t even notice the aircraft had become airborne. So quiet were the CS100’s two Pratt & Whitney (P&W) PurePower PW1521G geared-turbofan engines at full thrust that hundreds of spectators didn’t hear the aircraft until it passed directly over them a few hundred feet above.

This was the first clue to the aviationminded public that P&W’s new PW1500G engine – and the C Series aircraft family itself – might be something special. Nearly four years on, the growing number of CS100s operated by Swiss International Air Lines (Swiss) and the fleet of larger CS300s now entering service with airBaltic are demonstrating to passengers and bystanders wherever these aircraft fly that, at least in terms of the very low levels of engine noise the PW1500G produces, it is a near revolutionary turbofan engine.

Its quietness isn’t the only near revolutionary feature of the PW1500G, which P&W assembles at its Mirabel Assembly Center, right next to the C Series assembly line. Certificated in February 2013 as the first of six PW1000G subfamilies to date (the others are the PW1100G-JM for the A320neo family, the PW1200G for the Mitsubishi Regional Jet, the PW1400G for the Irkut MC- 21, the PW1700G for the Embraer 175-E2 and the PW1900G for the Embraer E190-E2 and E195-E2), the PW1500G also offers a major step-change in fuel efficiency over the previous generation of mid-size turbofan engines. Guaranteed by P&W to be at least 15% more fuel efficient than the most efficient CFM56 model, the PW1500G has more than achieved that target in service, according to both P&W and Swiss.

Chris Calio, president of P&W Commercial Engines, says: “The geared turbofan’s unique architecture reduces noise while improving fuel efficiency by 16% relative to the prior-generation, direct-drive engines. The PW1500G engine is performing extremely well in initial service. Engine fuel-efficiency is achieving specification and the engine is under its weight target, both of which have enabled the aircraft to exceed its fuel-burn specification and extend the range beyond its initial market commitments.”

While this news is impressive, perhaps even more so is that the PW1500Gs powering the Swiss CS100s have also offered a very high level of despatch reliability in initial service – a superb design, engineering and technical-support achievement, given that when a new turbofan engine type first enters service, its despatch reliability rate usually represents an important Achilles heel.

Dr Scherrer praises the level of on-site technical support P&W has provided Swiss from the moment the carrier’s first CS100 first touched down at the carrier’s Zurich base. He says: “The engine-related despatch reliability is effectively 100% and never fell below the high 90s in the fleet’s commercial operation. During the entry-into-service period, Pratt & Whitney based several technical representatives on-site in Zurich to support a seamless start [for] the Swiss C Series operation. Their contribution and support were and are still highly valuable in terms of the learning curve for the Swiss organisation, as well as ensuring fast and efficient communication channels between the airline and engine manufacturer.”

P&W, which as the manufacturer of the engine collects and aggregates despatch reliability data from every PW1500G in service with every C Series operator, says Swiss isn’t unique in the good experience it has had in its early commercial flights with aircraft powered by PW1500G engines. Calio says: “The reliability of the engine has been excellent so far. Currently, the engine is demonstrating 99.9% despatch reliability in its first nine months of revenue service, which is very good for a new-design engine.”

That said, no brand-new commercial aero engine ever enters service without experiencing at least some technical issues – and for Swiss, despite its generally excellent initial operational experience with the engine, the PW1500G hasn’t proved an exception to that rule. While at the time of writing Swiss hadn’t experienced any in-flight shutdowns, flight diversions or unscheduled removals-offwing involving PW1500Gs, it has had a few technical problems with CS100 engines.

…From an operational point of view, PW1500G engines feature a longer start-up time compared to other engine types.” (The related PW1100G-JM engine model powering the A320neo family experienced early, highly publicised issues that led to early engines requiring protracted start-up times, a problem that has to this day persuaded Qatar Airways not to accept the first batch of A320neos from its large A320neo-family order.)

P&W’s Calio concedes: “We have addressed a few minor issues during initial service operation. We plan to continue to incorporate improvements to improve the efficiency, reliability and durability of the components and systems of the PW1500G engine.”

When all is said, Swiss remains pleased with the PW1500Gs powering its CS100s and it expects the PW1500Gs, which will power the 20 CS300s it will receive, to be no more problematic. Dr Scherrer says: “The PW1500G is a newly developed engine which embodies state-of-the-art technology. As a consequence, from the beginning Swiss prepared itself to face technical teething troubles at entry to service. Such issues have been identified on the fan blades and traced back to non-mature production processes.”

However, notes Dr Scherrer: “Routine maintenance of the engine has been straightforward so far. Compared to other modern engine types operated by Swiss – the GE90-115B, Trent700, CFM56 – the PW1500G engine … is equivalent in terms of maintenance. Furthermore, the straightforwardness and simplicity of maintaining the fan blade and fan blade exchanges is something to point out. Taking into account that the learning curve for the Swiss organisation is not yet completed, [our] easiness in handling the PW1500G is expected to increase further.” 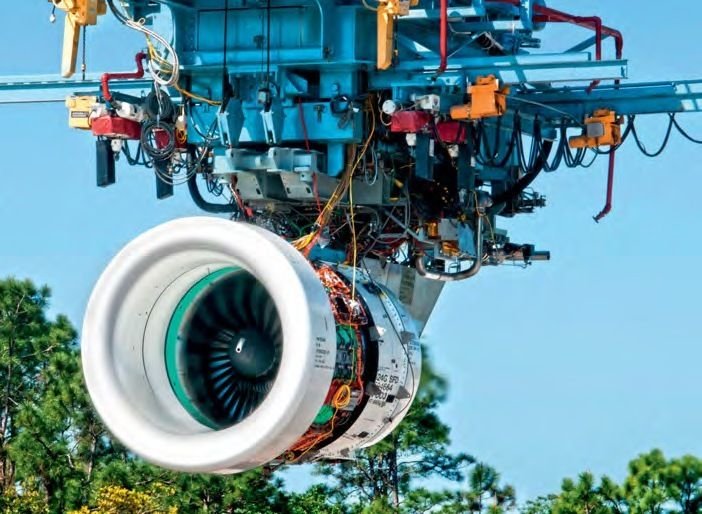 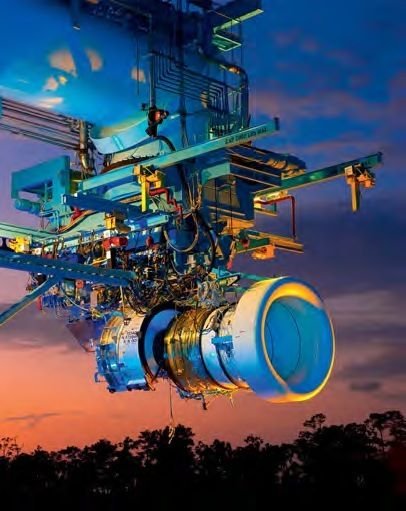 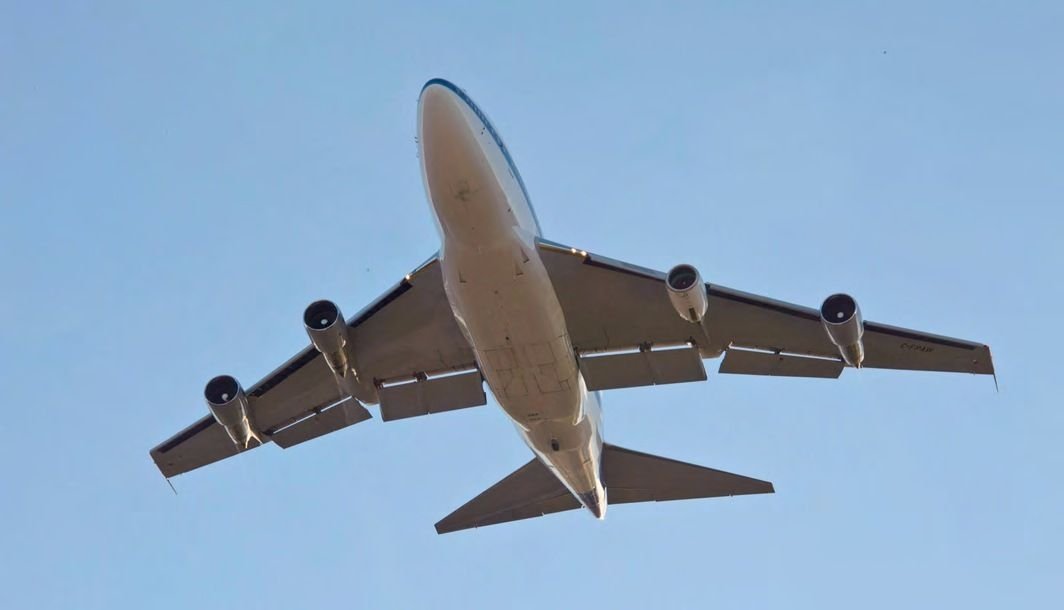 P&W has introduced a few modifications to subsequent production PW1500G design as a result of Swiss’s initial operating experience with the new engine type. Calio says: “Improvements to the PW1500G engine include modifications to the oil supply system, software enhancements – including steep approach capabilities that enabled the CS100 to operate from London City Airport – and improvements to a handful of engine accessories. There are also improvements to the combustor planned to achieve improved on-wing [maintenance] intervals. These improvements will be incorporated later this year. [Additionally, ] Pratt elected to add the combustor lining inspection to the maintenance check.”

As all manufacturers do for their volumeproduction engines, P&W is running a continuous improvement programme for the PW1500G. This programme is focusing on several areas of potential design improvement, says Calio: “We will continue to refine the engine controls and [bladetip] clearance-control systems to optimise fuel burn. We are also actively working improvements in the combustor liners, which are intended to extend the durability of these components for improved operational time on wing for the engine.” 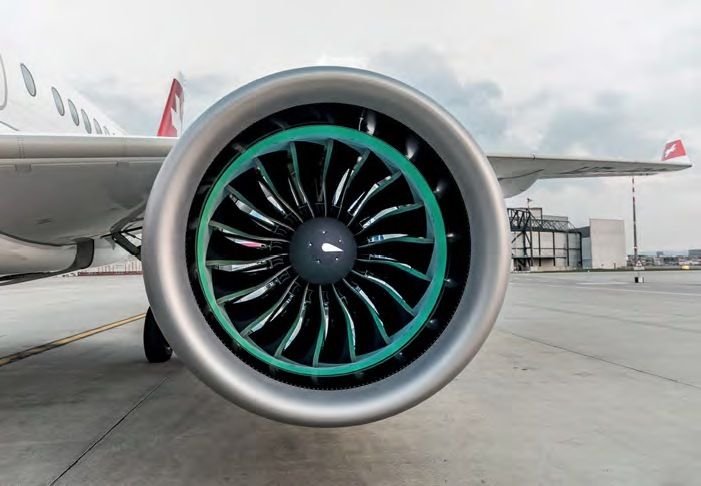 Geared turbofans aren’t a new concept; the Honeywell TFE331 geared-turbofan engine for business aircraft has been in service since 1972. However, P&W made brilliant use of 3D computational flow dynamics modelling to analyse and design the flow of lubricating and cooling oil through a star-and-planet gear system, allowing it to create an oil spray system capable of lubricating the first workable reduction gearbox for a large commercial aero engine.

Because the PW1500G’s FDGS allows both its fan and its low-pressure shaft to rotate at their optimally efficient rates, P&W was able to use the resulting efficiency increase to reduce by three the number of low-pressure compressor stages the engine required and also reduce by three stages the number of low-pressure turbine stages it required. The resulting net reduction of six rotating stages compared with previous-generation direct-drive turbofan engines lowered the length and weight of the engine considerably. At the same time, it cut by up to 2,000 the number of parts such as compressor and turbine blades and discs the PW1500G needed in order to operate.

Like other PW1000G family members, the PW1500G’s 18 fan blades are made of an advanced aluminium alloy honeycomb structure, which, as with the higher-production rate PW1100G-JM, has given P&W some manufacturing-quality headaches that it has only begun to overcome this year. However, the fan blade’s metallic honeycomb structure does make each blade very light, affordable, strong and aerodynamically efficient.

The ratio of cold bypass air (which produces about 90% of the engine’s thrust) to hot core air in the PW1500G is 12:1, a ratio practically unachievable until P&W developed its geared turbofan technology. The PW1500G’s very high bypass ratio also helps make it a very quiet engine. At peak take-off thrust of 24,400lb (108.5kN) the noise level it produces is 20dB below ICAO’s Chapter IV minimum-noise standard, which means its airport noise footprint is up to 75% smaller than those of previous turbofan engines, and the level is even well below ICAO’s future Chapter VI standard.

Use of one-piece integrally bladed rotors to provide some of the PW1500G’s eight rotating high-pressure compressor stages helps further reduce the engine’s weight and parts count. Additionally, all PW1000Gs employ P&W’s advanced TALON X (Technology for Advanced Low NOx), which employs a rich-quench-lean combustion cycle to reduce emissions of oxides of nitrogen by up to 70% below the requirements of current CAEP environmental regulations.

There are seven models in the PW1500G subfamily. The PW1519G, which is a Bombardier CS100 reduced-thrust model, produces 19,775lb (87.9kN) of maximum take-off thrust and 18,685lb (83.1kN) of maximum continuous thrust. (All measurements here are given in terms of sea-level static thrust.)

1 The PW1524G’s final flight test, on P&W’s 747SP flying testbed, with the engine mounted on the inner port pylon. Pratt & Whitney 2 The ratio of cold bypass air to hot core air in the PW1500G is 12:1, a ratio practically unachievable until P&W developed its geared turbofan technology. Pratt & Whitney 3 At 20dB below ICAO’s Chapter IV minimum-noise standard, the PW1524G’s airport noise footprint is up to 75% smaller than those of previous turbofan engines. Pratt & Whitney 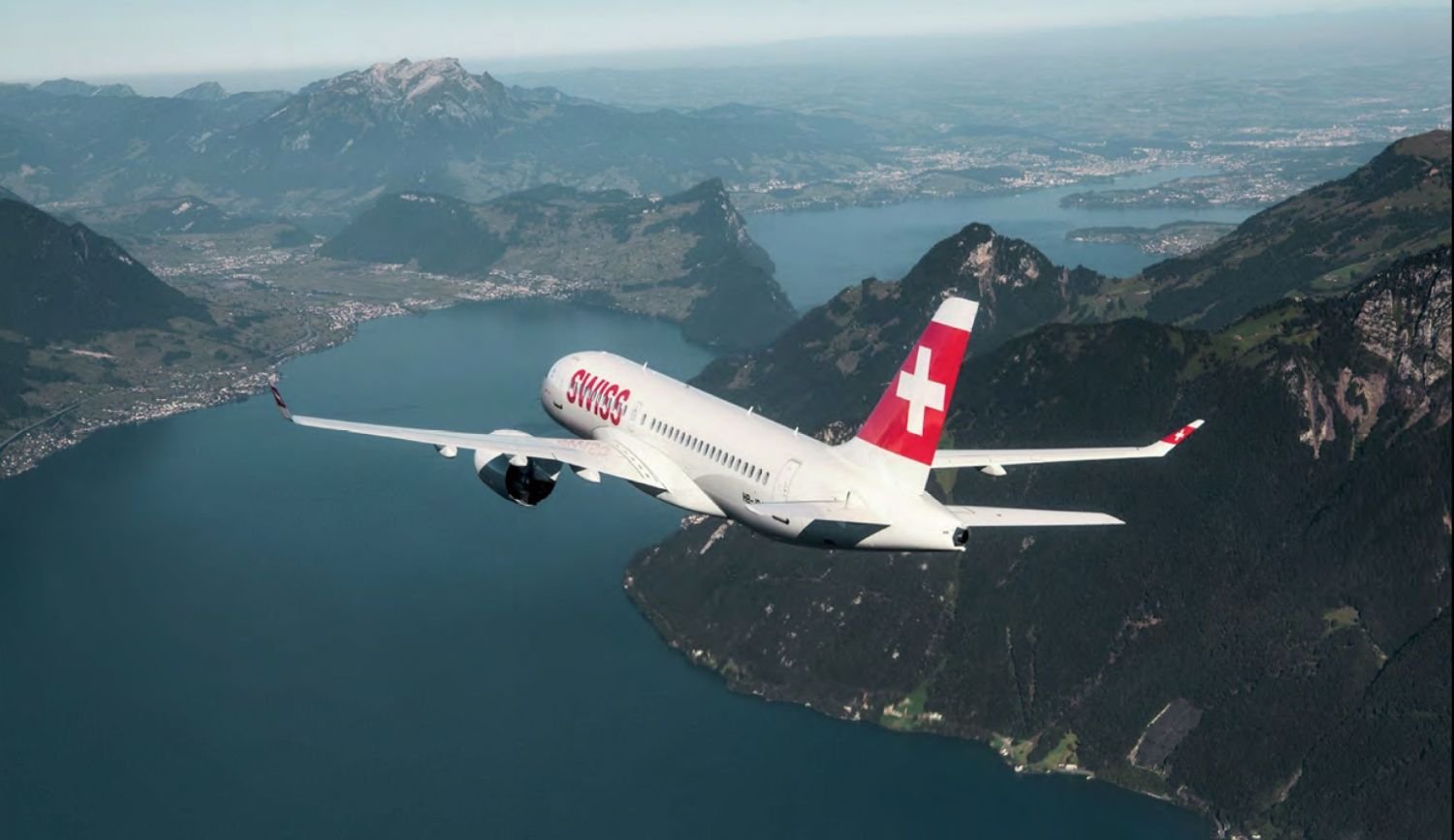