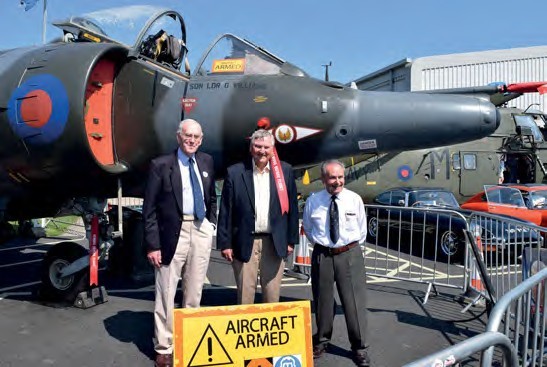 The three Harrier pilots at Tangmere: from left to right, Mike Adams, Graham Williams — in front of ‘his’ Harrier, XV744 — and Tom Lecky-Thompson.
DAVID COXON 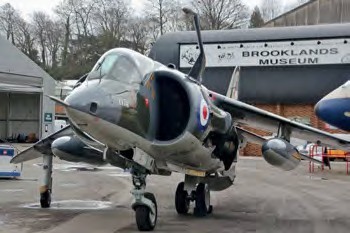 Harrier GR1 XV741 after reassembly at the Brooklands Museum, prior to entering the Vimy pavilion for the ‘First to the Fastest’ exhibition.
BROOKLANDS MUSEUM

At the Tangmere Military Aviation Museum on 20 April, AVM Graham Williams officially opened the ‘Harriers and the 69 Air Race’ exhibition. Williams was the RAF Harrier test pilot who flew the museum’s Harrier GR3 XV744 — at the time configured as a GR1 — from New York to London in the Daily Mail-sponsored 1969 air race across the Atlantic. He wasn’t originally chosen to be involved, as another test pilot, Sqn Ldr Mike Adams, who had been testing the Harrier with Hawker Siddeley, was to fly the London to New York attempt.

In February 1969, three months before the start of the race, Adams had an accident at Dunsfold aerodrome while taxiing a Harrier when the nosewheel sheared off and he badly damaged his back. He was out of the race and Williams was selected, even though he had only 10 hours’ experience on type, to join Sqn Ldr Tom Lecky-Thompson as the RAF Harrier team pilots. Lecky-Thompson took over as lead pilot to fly the London to New York flight and Williams was to fly the opposite way.

Both attempts were successful, Lecky-Thompson achieving the shortest time from the top of the Post Office Tower in London to the top of the Empire State Building in New York. The three pilots had not met since the race 50 years ago. They therefore had much to say to each other when they were official guests at the Tangmere opening event. The exhibition, which was originally planned to close on 12 May, will now remain open until the end of July.

Meanwhile, at the Brooklands Museum, the Harrier which set the fastest time on the London-New York section, XV741, went on show during mid-April in the new ‘First to the Fastest’ exhibition, alongside Vickers Vimy replica NX71MY in the museum’s Vimy pavilion. The Harrier, which has been beautifully restored to the GR1 configuration of 1969 over a six-year period by Jet Art Aviation in north Yorkshire, is on loan to the museum.

More on the 1969 Trans- Atlantic Air Race in the July issue of Aeroplane.

The three pilots had not met since the race 50 years ago. They therefore had much to say to each other at the Tangmere opening event