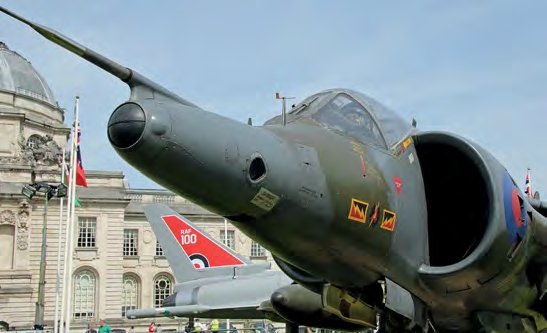 A former resident of the Milestones of Flight gallery at Hendon, Harrier GR3 XZ994, and a full-size facsimile Eurofighter Typhoon with RAF 100 tail markings outside Cardiff City Hall on 18 May.

This summer’s RAF centenary aircraft tour got under way at Cardiff, south Wales, on 18-20 May with a display of five aircraft in front of the City Hall. The airframes on show represent five major eras of RAF history, starting with Sopwith Snipe reproduction ‘E6655’, which is a partially original aircraft constructed by The Vintage Aviator in New Zealand. It was moved to Cardiff from the RAF Museum at Hendon.

Representing WW2 was the Imperial War Museums’ Spitfire I replica ‘X4474’, wearing No 19 Squadron markings, while the Cold War was depicted by Harrier GR3 XZ994, which was previously on display in the Milestones of Flight building at Hendon. Completing the aircraft display were Wessex HC2 XR497 from the RAF Museum collection at Cosford, and a Eurofighter Typhoon FGR4 replica wearing an RAF 100 logo.

The aircraft types selected for each of the successive city events will vary, but will cover the same eras seen in Cardiff. Future tour dates are 6-9 July at Horse Guards Parade, London; 10-12 August at Newcastle in County Down, Northern Ireland; 25-27 August in Birmingham; 31 August-2 September in Glasgow; and 14-16 September in Manchester. The London event will be followed by a 100-aircraft flypast down The Mall on 10 July.