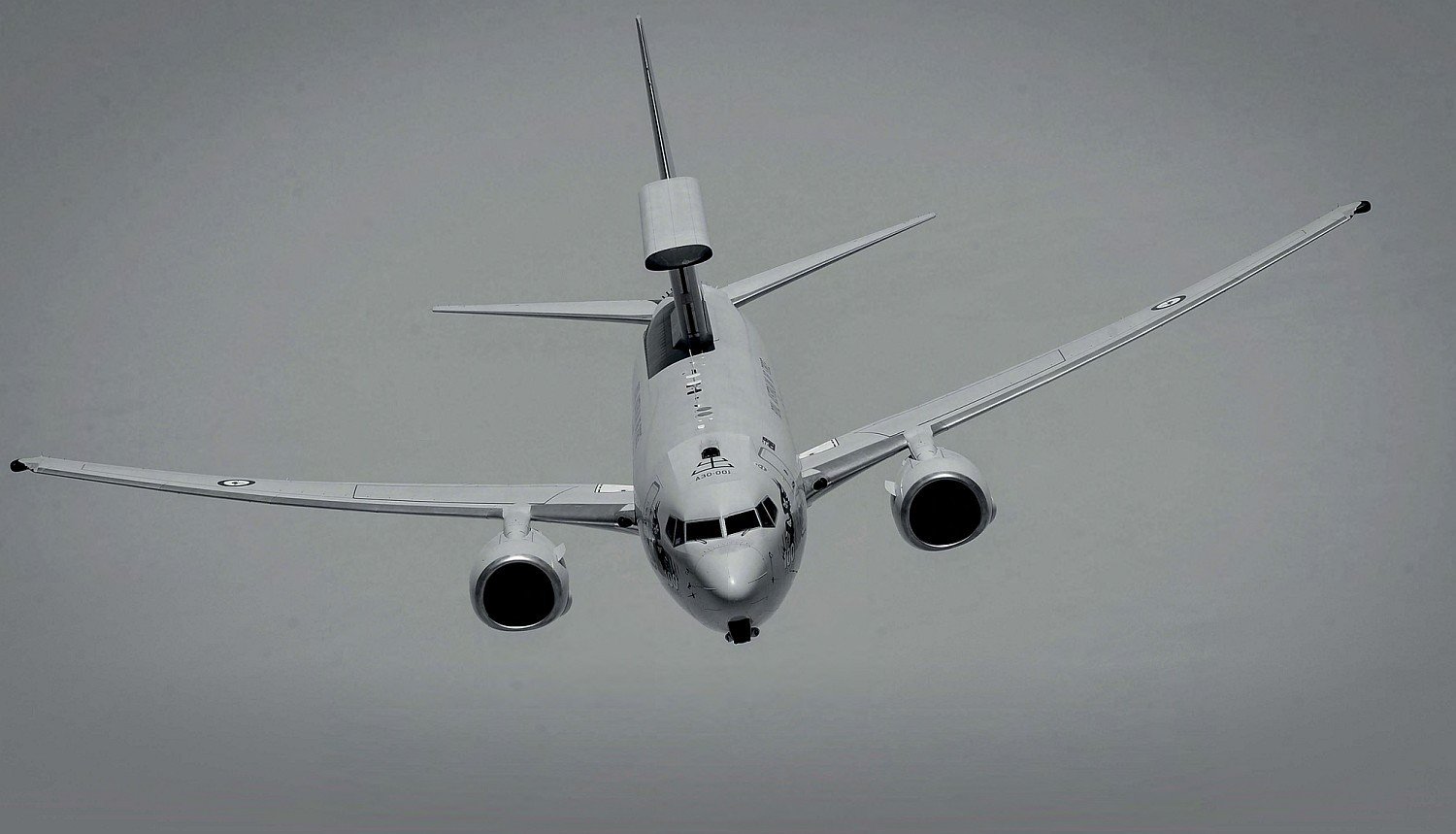 The E-7A Wedgetail can control the tactical battle space, providing direction for fighter aircraft, surface units and land based elements, as well as supporting aircraft such as tankers and intelligence platforms. The UK Ministry of Defence has ordered five E-7s at a cost of nearly $2 billion.
SSgt Michael Battles/US Air Force

LATE LAST year UK Defence Secretary Gavin Williamson revealed the Ministry of Defence had selected the Boeing E-7 Wedgetail to replace the E-3D Sentry AEW1, subject to reaching a satisfactory deal with Boeing over the price.

Williamson said the MoD was already in discussions with Boeing and the Royal Australian Air Force; the decision was reached without a formal competitive evaluation of alternative contenders. The Royal Australian Air Force E-7, a version of the Boeing 737 AEW&C, is named after the wedge-tailed eagle, Australia’s largest bird of prey. When the United Arab Emirates decided to procure a new Airborne Early Warning and Control (AEW&C) aircraft, it became a threeway contest between the Saab Globaleye, Northrop Grumman E-2D Advanced Hawkeye, and Boeing 737 AEW&C. Saab’s Globaleye took the eventual prize, having reportedly won the UAE’s competitive evaluation by a handsome margin.

There was therefore surprise and criticism when it emerged the UK is planning to procure one of the losing contenders from the UAE competition, and will do so without inviting any competitive bids, and without any serious formal evaluation of alternatives. Criticism was particularly intense since the MoD had previously announced a succession of un-competed deals with Boeing, including those for the P-8A Poseidon and AH-64E Apache Guardian.

The RAF’s existing E-3D Sentry AEW1 AWACS aircraft have been suffering severe availability problems. Nor have the RAF E-3Ds been upgraded and modernized, unlike E-3s operated by the US Air Force (which have undergone a Block 40/45 upgrade with a new mission system and glass cockpit), and by NATO, France, and Saudi Arabia.

To bring RAF E-3Ds to broadly the same standard as current US and French aircraft would be a costly and major undertaking.

Furthermore, upgrade would result in an aircraft with relatively modest capabilities in the face of proliferating long-range missile systems and emerging low observable fighter threats, which would force RAF E-3Ds to operate hundreds of miles back from contested airspace.

A capability sustainment programme to keep RAF E-3Ds in service until 2035 was cancelled; instead it was decided the type would be replaced by a new aircraft. The UK MoD rapidly concluded the E-7 Wedgetail represented the only option, and firmly rebuffed suggestions from the Chairman of the Defence Committee that any requirement should be put out to a competitive tender.

Furthermore, the UK MoD also rejected the suggestion there were viable alternatives available which deserved to be given fair consideration.

Commenting on the decision, Defence Procurement Minister Stuart Andrew said: “In considering the E-7 Wedgetail, there was such a clear distinction over any other option it was felt that running any type of competition would unnecessarily consume MoD and industry resources, whilst the gap between UK capability and the evolving threat would be expected to widen.”

The E-7 Wedgetail has been proven on operations with the Royal Australian Air Force in the Middle East, and has reportedly impressed US Forces when participating in the Red Flag series of exercises.

Thanks, but no thanks?

Saab had offered a solution based on the use of spare A330 Voyager aircraft. Nine of the 14 Voyagers available to the RAF are in regular use, with the remainder providing a surge capacity. These aircraft, currently used for third-party charter would have been adapted for AEW duties, possibly replacing them later with new aircraft fitted with aerial refuelling booms. Saab’s proposal involved fitting two tandem Erieye radars to overcome possible wing blanking issues.

The MoD said it had no endorsed requirement for an aerial refuelling boom and that reopening the private finance initiative deal with Air Tanker would not be in the best interests of the MoD or the taxpayer.

Saab denied that integrating the Erieye radar system on the Airbus A330 airframe represented a significant risk, and maintained the A330 would be the lowest risk of any of the five platforms currently fitted with Erieye. No real consideration was given to the Northrop Grumman E-2D Advanced Hawkeye, nor to Saab’s Globaleye or the G550-based IAI conformal airborne early warning and control (CAEW) aircraft; small crew complements were felt to be inadequate to meet the UK’s requirement for command and control and airborne battle management roles.

Despite the lack of a formal competition and evaluation, RAF AWACS force insiders maintain the RAF had a “very good understanding of the capabilities of alternative solutions”, gained via affcombinationffof “exchange posts, operating alongside them on ops [where capabilities and limitations are quickly exposed], briefings from operators and manufacturers, and demonstrations.”

Following market analysis and discussions with other potential providers, the MoD concluded procurement of the E-7 Wedgetail represented the best value for money option for the UK, whilst also providing a significant opportunity for increased defence co-operation and collaboration with its key ally and five eyes partner Australia. The UK will soon operate the same P-8 maritime patrol aircraft, the same Type 26 frigate and the same F-35 Lightning II.

The UK is expected to purchase five Wedgetail aircraft, perhaps taking two from Australia initially, for service from 2022.

The first three Royal Air Force personnel (including a pilot, an electronic support measures operator, and a surveillance and control officer) began Wedgetail training with the RAAF’s 2 Squadron at RAAF Base Williamtown, New South Wales in September 2018.

With Boeing’s 737-700NG model unlikely to be available by the time a UK Wedgetail contract is signed, the UK’s aircraft may be based on the larger military P-8A Poseidon, which would provide additional space for extra operator stations and crew rest areas. Alternatively, the aircraft could be based on the newer 737MAX variant, which would bring more modern systems, more modern and fuel-efficient engines, and greater endurance.

Boeing is expected to offer some degree of local final assembly and integration work for Britain’s defence industry.

Defence Procurement Minister Stuart Andrew told Parliament: “Final assembly of the E-7 aircraft and radar combination would be undertaken in the UK and Boeing have confirmed that it intends to use the same facility to meet any future E-7 sales opportunities for other customers.”