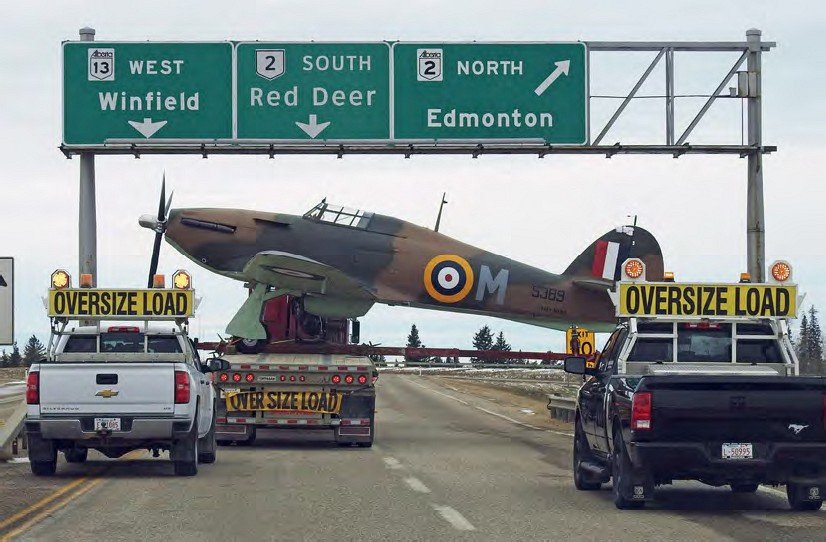 One of the more impressive road-running vistas, as the City of Calgary’s Hurricane XII is carefully moved from Wetaskiwin towards Calgary Airport on 30 October.
VIA RICHARD DE BOER 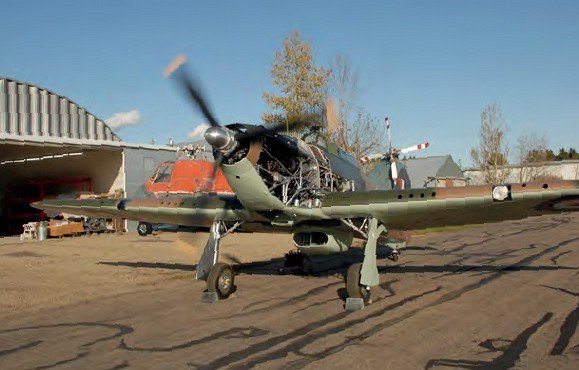 The Packard Merlin 29 in RCAF 5389 is run up after the rollout at Wetaskiwin on 26 October.
RICHARD DE BOER

Seven years less one day after it arrived at the Historic Aviation Services workshops, Canadian Car and Foundry-built Hawker Hurricane XII RCAF 5389 was rolled out into the autumn sunshine for engine runs at Wetaskiwin, Alberta on 26 October. The following Wednesday, the former Royal Canadian Air Force machine began the journey to its final resting place in the Hangar Flight Museum, previously the Aero Space Museum, at Calgary Airport.

Owned by the City of Calgary, responsibility for the restoration of RCAF 5389 was entrusted to the Calgary Mosquito Aircraft Preservation Society in October 2012, the work then being subcontracted to Byron Reynolds and his team at Wetaskiwin, whose previous restoration of Hurricane XII RCAF 5418 to flying condition culminated in Byron firing up its Rolls-Royce Merlin 29 in June 1988. Although restored to airworthy trim, 5418 did not fly, and is now displayed in Canada’s Aviation Hall of Fame at the Reynolds-Alberta Museum in Wetaskiwin. 5418 was positioned on the ramp at Wetaskiwin for the roll-out, the two fighters representing half of the restored Hurricanes currently extant in Canada.

Built by Canadian Car and Foundry at Fort William, Thunder Bay, 5389 was taken on charge by the RCAF on 23 June 1942 and originally delivered to No 4 Training Command of the British Commonwealth Air Training Plan at Calgary. It was soon allocated to No 133(F) Squadron and, after arriving at RCAF Lethbridge, Alberta, began its service career on 1 July 1942 flying on general pilot training. On 5 October 1942, 16 Hurricanes and four Harvards from 133 were flown to RCAF Boundary Bay, British Columbia — which was still being built — for home defence duties with Western Air Command.

Once runway construction was completed, at 11.00hrs on 27 October RCAF 5389 became the first Hurricane to offcially fly from the base, when Fg Off F. H. Sproule got airborne on a practice scramble. In addition to the unit flying coastal protection and reconnaissance sorties to guard against possible Japanese attack, instrument training was undertaken in the Harvards. Every month five qualiThed fighter pilots were scheduled to be posted overseas, mainly to the UK. The departing pilots were then replaced by five new graduates from service flying training schools in Canada. On 14 July 1943, 5389 was damaged in a landing accident, and a week later was loaded onto a ship for transportation to Vancouver for repairs. With the Hurricane now disappearing from front-line duties, fixing 5389 wasn’t a priority and the work wasn’t completed until March 1944. It went into storage at No 2 Reserved Equipment Maintenance Unit at Moose Jaw, Saskatchewan, and, with Curtiss P-40s having now replaced Hurricanes in RCAF fighter units, would most likely have ended up being scrapped had the Japanese not begun attacks with hydrogen balloons on the continental USA in November 1944.

The Fu-Go fire balloons, armed with anti-personnel and incendiary devices, were designed to start fires in forests and prairies in the USA and Canada. Carried by the jetstream at about 30,000ft across the Pacific, between 9,000 and 10,000 of them were ultimately launched from the home islands of Japan. During January 1945 a new, top-secret second line of defence — the government feared the balloons may be carrying biological weapons, so total censorship was enforced — was established by the RCAF, giving several stored Hurricanes a reprieve. On 12 March, 5389 was flown to No 8 Repair Depot at Winnipeg and modified for balloon interception duties: upon going into storage the 12 0.303in machine guns fitted to the Hurricane XIIs and the armour plating and radios were removed, and to keep weight to a minimum for high-altitude balloon interceptions only one machine gun and a radio were refitted at Winnipeg before the aircraft was despatched to No 2 Air Command at Yorkton, Saskatchewan, two days later. 5389 began anti-balloon patrol duties, although no contact was made before its final mission, at 21.55hrs on 8 June 1945.

During August 1946 5389 was sold off, ending up on a farm in Regina, Saskatchewan, from where it was recovered in 1962 by Lynn Garrison of No 403 Squadron, RCAF, and moved to Calgary Airport. Garrison also saved Avro Lancaster X FM136, which is now on display at the Hangar Flight Museum. Following several moves around Alberta and Saskatchewan, 5389 was acquired by the City of Calgary in 1972, and following storage at the Calgary Centennial Planetarium was moved to the Aero Space Museum in 1988.

Richard de Boer from the Calgary Mosquito Aircraft Preservation Society says, “The engine in 5389 is a Packardbuilt Merlin 29. We actually have the original engine, which was another 29, but decided to install a replacement as it is essentially ‘new/old stock’, never having been installed in an aeroplane. It had factory test time only on it. We did a top overhaul on the heads and banks, and sent the carb, pumps and mags out for overhaul, which will make it safe and serviceable for ground running.” 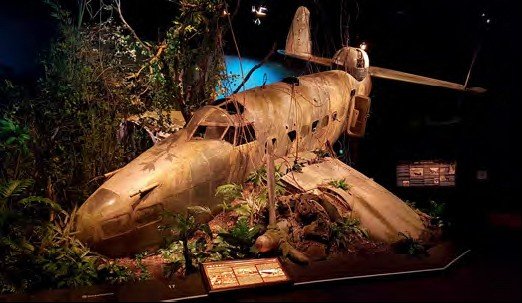 The Dangerous Skies World War II exhibition at the Omaka Aviation Heritage Centre near Blenheim, New Zealand, reopened at the end of September following a revamp that has seen the world’s most historic Lockheed Hudson, NZ2049, going on display in a Pacific jungle crash tableau. Operated by No 3 Squadron, Royal New Zealand Air Force, Hudson IIIa NZ2049 was attacked by three Nakajima E8N floatplanes while on its first patrol from Henderson Field, Guadalcanal on 24 November 1942, becoming the first RNZAF aircraft to encounter the enemy in air-toair combat during the South Pacific campaign. The pilot, Fg Off George Gudsell, descended to wave-top height to escape the pursuing Imperial Japanese Navy aircraft, which continued to attack the Hudson with their twin 7.7mm machine guns for about 20 minutes until they broke off and headed for home. After landing, half a dozen bullet holes were found in NZ2049.

Just three days later Gudsell and his crew were again on patrol in NZ2049 when they spotted a Japanese naval task force. As the radio operator was reporting the position of the ships, Gudsell decided to take the Hudson in for a closer look, when three Mitsubishi A6M Zero-Sens came out of the sun. During their first pass they put the Boulton Paul turret out of action. Gudsell clambered up into the astrodome to direct operations while the second pilot, Roy McKechnie, flew the Hudson. Gudsell kept watch on the three attackers, calling out to McKechnie which way to turn as each attack came in.

The action lasted a scary total of 17 minutes, during which one bullet passed through the astrodome hatch, into the cabin and out of the second pilot’s windscreen. There is still a small riveted repair patch on the front coaming of the astrodome where a bullet went through, and another towards the top of the door post into the cockpit. Following these two actions, George Gudsell was awarded the US Air Medal, becoming the first New Zealander to be given a medal during the Pacific War.

The battle-scarred machine continued to serve with No 3 Squadron and then with Nos 2 and 9 Squadrons in the bomber/reconnaissance role. It later flew as a transport with Nos 40 and 41 Squadrons. After storage at RNZAF Base Woodbourne post-war it was sold for scrap, but was saved by collector John Smith of Mapua in 1969 and stored until he sold it to current owner Bill Reid in 2007. The Hudson’s airframe still exhibits several sets of wartime markings and its original paint.

Another new diorama at Omaka features a Nord 1002 (Messerschmitt Bf 108), c/n 285, which was owned and flown by 28-kill Luftwaffe fighter ace Franz Stigler from Vancouver between 1983-99 as C-GRIT.

The Pole Pass Hamilton Metalplane at left, and on the right the 1941 Boeing-Stearman A75N1 Kaydet, N940V, which was recently restored by Larry Tobin for the HFF. One of the most original examples in the world, it was a singleowner aeroplane from 1945-2005. HFF

The Historic Flight Foundation’s new 20,000-square foot display hangar at Felts Field in Spokane, Washington was inaugurated on 18 October with a gala dinner, following a recent move from the HFF’s previous home at Paine Field, Seattle. Started by John T. Sessions in 2003, the HFF collection includes Douglas DC-3 N877MG, which came to Europe for the D-Day commemorations in the early summer, Spitfire IX SL633/N633VS, and the ex-Fighter Collection B-25D Mitchell 43-3318/N88972 Grumpy. Among the aircraft on loan to the HFF at Spokane are the world’s only surviving Hamilton Metalplane, N879H, owned by Pole Pass Airways, and Addison Pemberton’s former Fleet Air Arm Grumman JRF-6 Goose, FP511/ N95467. Sessions, who is originally from Spokane, says, “This project was hatched about three years ago. It pleases me to bring such a project to an appreciative community, and my home town. The support has been terrific”. The new museum opens to the public on 17 December.