Even at the end of its active life the Avro Vulcan was still a head- turner, with XH558 wowing thousands of people across Britain up until 2015 following its restoration. And yet the bomber appeared on the aviation scene with similar sense of awe. We went into the archives of The Aeroplane magazine, and found a report on the Avro 698 Delta bomber from 1952 – it was flying at the S.B.A.C. Show at Farnborough only three days after making its first ever flight.

It made quite an impression.

The Aeroplane stated: “Most significant and memorable event on the opening day of the S.B.A.C. Show was the demonstration of the Avro 698 Delta bomber. So sure and certain was its handling by Wing Cmdr. Roland Falk, that it was difficult to realise it had flown for the first time only three days previously.”

Indeed, such was the novelty of the aircraft’s appearance that initial sight of it caused a writer of The Aeroplane to state it almost had an alien quality. Preceding the Vulcan’s appearance at the airshow were a Hunter and Swift, with the delta wing bomber appearing as a mysterious shape in the distance. The Aeroplane reported: “For a considerable time while the two last-mentioned aircraft were in the Farnborough circuit holding the public eye, it was possible to discern futuristic shapes circling on the horizon a few miles away. These shapes, which, despite the knowledge that they were terrestrial, gave rise to eerie sensations and a feeling that they were extra- terrestrial, manned by species hitherto unknown to man.

“These shapes, at least the largest of the three, were the highlights of the 1952 exhibition; and when their turn came to display themselves they approached in patriotic formation, the majestic Avro 698 delta bomber finished in glossy white, holding place of honour in the centre of the formation, flanked by the red Avro 707A on the one side and the blue 707B on the other.

“After the initial run-over in formation the two smaller craft held back to allow the largest of the three to manoeuvre to best advantage over the crowd. In view of the 698’s vast size and unorthodoxy, it was remarkable to learn that Roly Falk was the sole occupant of the new bomber which, when viewed in the circuit, had the appearance of a species associated with submarine life. It resembled, in fact, a giant stingray so common in tropical waters.

“Although the 698 had done less than three hours’ flying when it first appeared at Farnborough, Falk handled it with what may be termed abandon. His confidence in the delta planform built up after two years’ experience on the predecessors of the bomber, and in the delta bomber itself, was apparent in the way he threw it about the Farnborough skies. This gives a clue to the excellence and practicability of the type, even though it is as yet in prototype form.
“One of the most curious things about the 698 was the way in which the dive brakes worked. These appeared on what look like telescopic forks extending above and below the mid chord of the wing. It would have been interesting to see the undercarriage lowered, but Falk did not put it down.

“When the new delta bomber was announced it was claimed that it would fly faster, higher, carry a greater load than anything produced before it. These announcements are greeted with scepticism as a rule, but seeing the machine in the flesh as it were, brought the claim into sharp relief. The 698 looks extremely fast and by reason of its planform should easily qualify for both the second and the third of the manufacturer’s claims.”

It’s amazing to read the reactions to what was effectively the inaugural public flight of the Vulcan, nearly 70 years ago. What hasn’t changed is the sheer awe it inspires in people who see it for the first time. 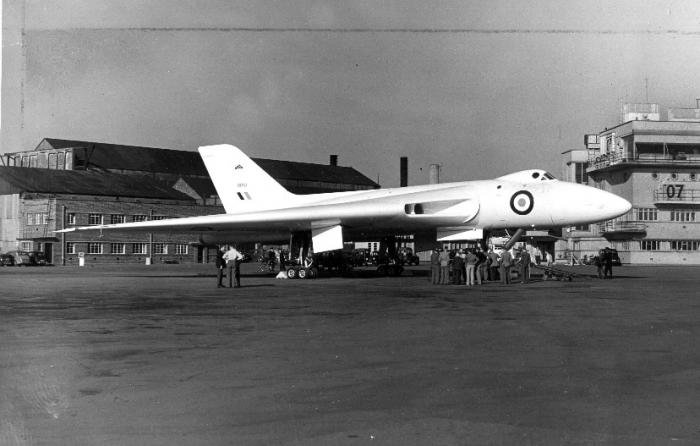 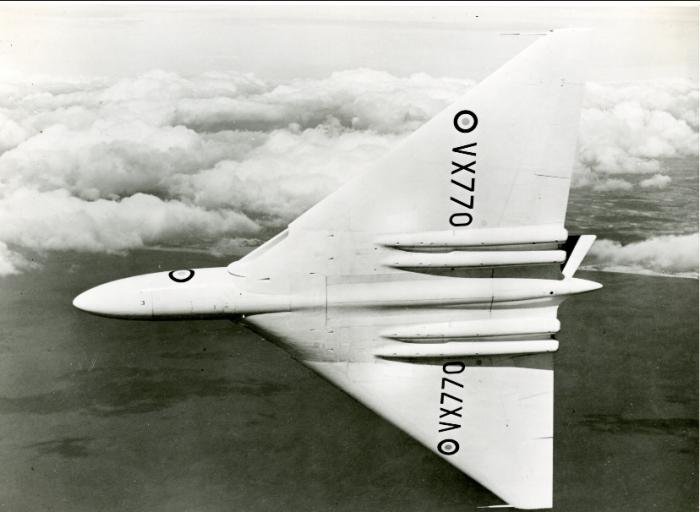 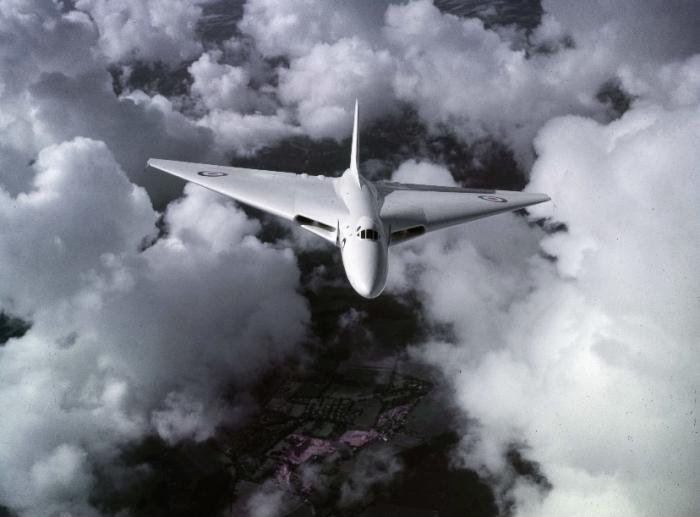 Three views of Avro 698 VX770, which was the first of what would become known as the Vulcan to take to the air.

To find out more about the Vulcan to the Sky Trust, visit https://vulcantothesky.org/