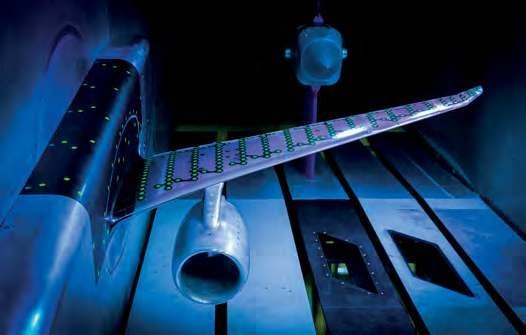 In what is described as an industry first, a new method of analysing the flutter behaviour of an aircraft’s wing in real time has been tested. The research involved Embraer, the German Aerospace Center (Deutsches Zentrum für Luft- und Raumfahrt, or DLR), the Netherlands Aerospace Centre (NLR) and German–Dutch Wind Tunnels (DNW).

The interaction between elastic vibrations in an aircraft’s structure has a key influence on light characteristics and, with future aircraft set to be lighter and therefore more flexible thanks to greater use of lighter materials such as composites, the occurrence of elastic vibrations is set to be a more important factor in aircraft design. Flutter, where the vibrations of an aircraft structure interact with the surrounding air low so their amplitudes increase rapidly, is a key aspect in aircraft design.

The testing with Embraer and the research organisations involved a highly elastic fibre glass wing model that can deform extensively. Pressure sensors and strain gauges were installed on the wing, which was tested from Mach 0.7 to Mach 0.9 at different angles of attack. Researchers monitored the vibrations of the model and used a new method to analyse its frequencies and damping ratios in real time.

A DLR statement said: “As a result, it was possible during the test to identify exactly which safety margins remained before the onset of flutter and the resulting possible destruction of the model …It should also allow future aircraft to be tested more efficiently and more quickly.”

Embraer initiated the project to test its numerical predictions for wing flutter and to make future flutter analysis more efficient.

The DLR and NLR designed a wind tunnel model tailored to the surface geometry of the wing to meet the requirements, while the NLR undertook detailed design of the fibre glass wing, built the wing and connected it to the engine pylon, and created the model’s built-in measurement technology.

The DNW was predominantly responsible for test preparation and execution, with the test itself carried out at DNW’s high speed tunnel in Amsterdam. The DLR conducted real-time data analysis. Mark Broadbent