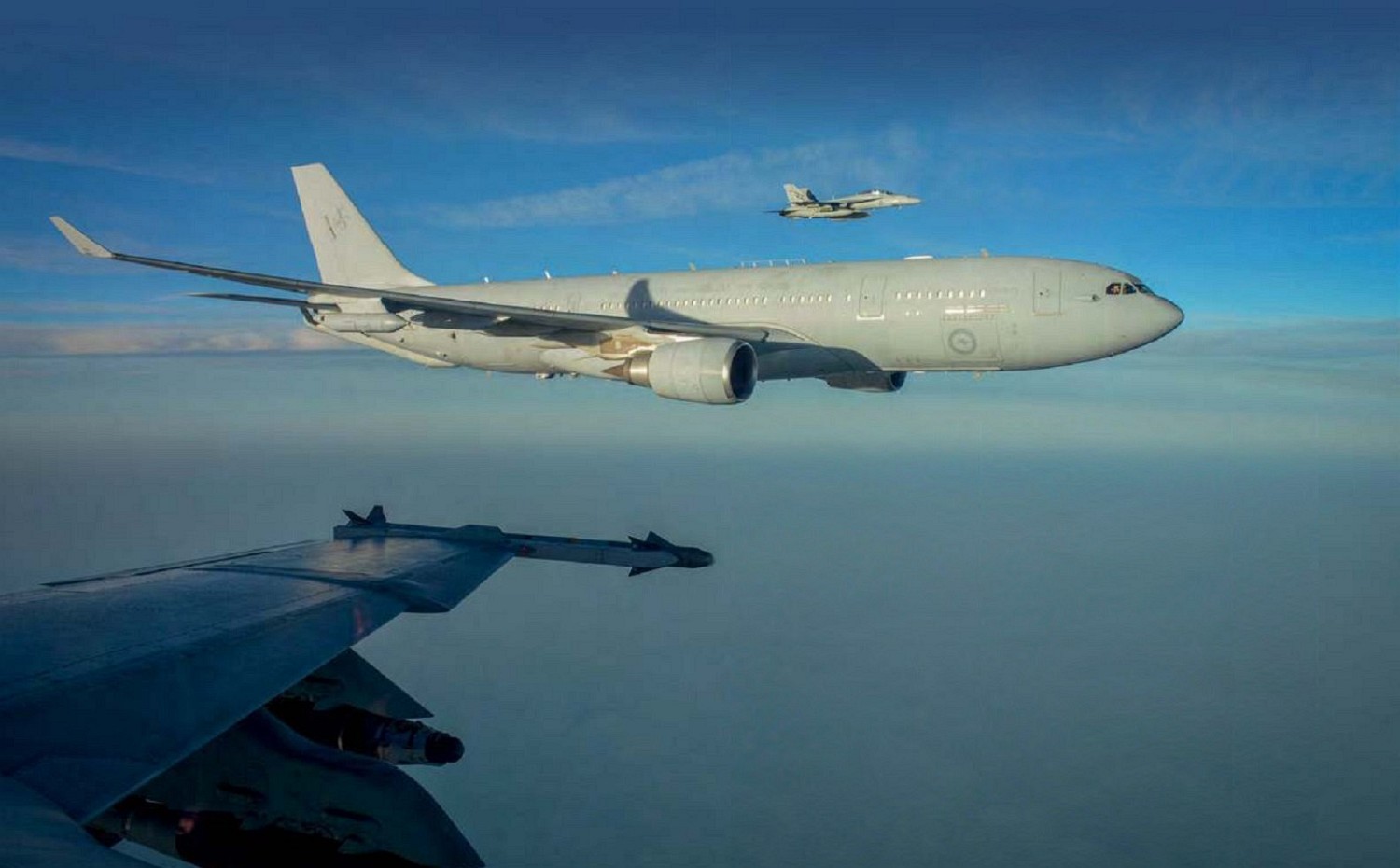 OCTOBER WAS a busy month for the Australian Defence Force (ADF), with activities including the formal unveiling of new markings for the RAAF’s ‘Roulettes’ aerobatic team, the delivery of the 10th Lockheed Martin F-35A Lightning II, finduction of the last BAE Systems Hawk Mk 127 for upgrade, and first of class flight trials (FOCFT) for the Australian Army’s Airbus Helicopters Tiger ARH.

In other news, the latest Airbus KC-30A multi-role tanker transport (MRTT) rotation to the Middle East concluded during the month, with the arrival of the aircraft at RAAF Base Amberley, south east of Brisbane. During the four-month rotation the single KC-30A completed 95 missions in 776 flying hours and provided 5.6 million pounds (2.5 million kg) of fuel to coalition aircraft.

The Royal Australian Air Force (RAAF) formally revealed the new markings selected for its ‘Roulettes’ aerobatic team during a ceremony in Canberra on October 17, 2018, which was attended by Chief of Air Force Air Marshal ‘Leo’ Davies and Defence Minister Christopher Pyne.

The Roulettes are a part-time team, flown by instructors from the Central Flying School (CFS) at East Sale in Victoria. The new colour scheme will be worn by the RAAF’s new Pilatus PC-21 aircraft, which will replace the current PC-9/A with the team in early 2019. The RAAF has 49 PC-21s on order and 24 had been delivered by the end of October 2018.

The aircraft are part of a complete training system being delivered under Project Air 5428, which will allow pilot training of RAAF, Royal Australian Navy (RAN) and Australian Army Aviation Corps (AAvn) candidates. As such, the PC- 21 will replace the Pacific Aerospace CT-4B Air trainer in the basic flying training role and the PC-9/A in the advanced role. Candidates will begin training on the new aircraft in January 2018.

Minister Pyne said: “The new colour scheme is a visually striking 21st century image for the RAAF training aircraft and Roulettes, that is unique to the RAAF and the Roulettes.”

He added: “While pursuing a 21st century look, the new colour scheme retains the traditional colours of the Air Force and the Australian National Flag, the Roulettes ‘R’ logo and incorporates the Southern Cross.”

The Roulettes will fly their final major public display with the PC-9/A at the Australian International Air Show at Avalon in March 2019.

The RAAF’s fast jet fleets also recorded significant milestones during the period, with the finduction of the final Hawk Mk127 into BAE Systems’ upgrade programme at RAAF Williamtown, north of Sydney, and the delivery of the 10th F-35A in the United States.

BAE Systems Australia announced on October 25, 2018, that the last of the RAAF’s 33 Hawk lead in fighter trainer aircraft had commenced upgrade to a configuration similar to that of the Royal Air Force’s Hawk T2 Advanced Jet Trainer.

The upgrades have been carried out under Project Air 5438 Phase 1A (Lead In Fighter Capability Assurance Programme, which was approved in 2013 and began in 2016. The programme adds simulated radar and electronic warfare capability, digital mapping, ground proximity warning system and traffic collision avoidance system.

BAE Systems Australia Chief Executive Gabby Costigan said: “The upgraded Hawk aircraft provides the RAAF with a similar capability as the most modern Hawk aircraft around the world.” 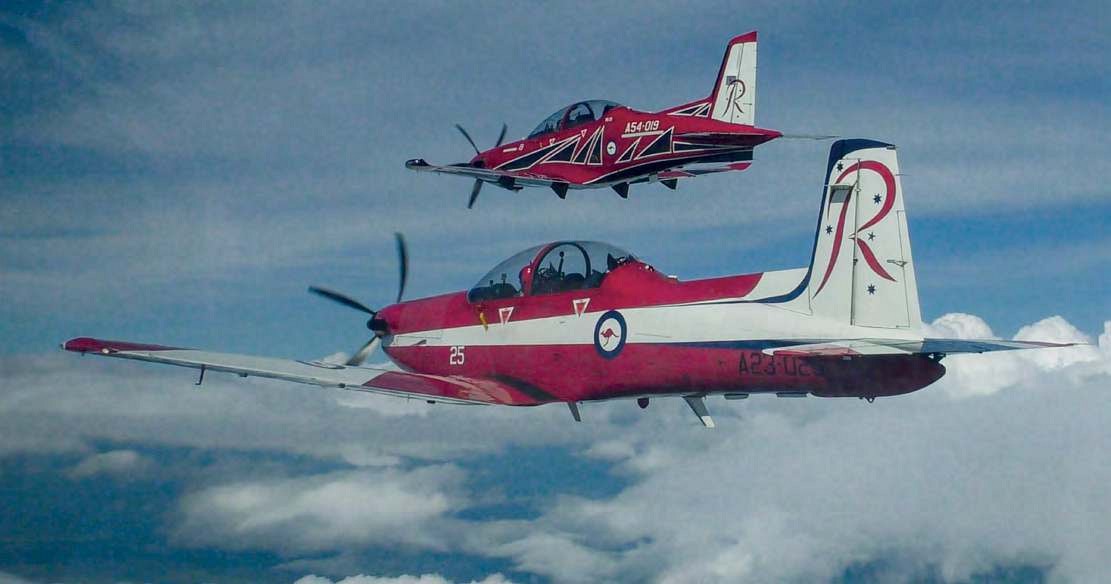 She added: “It has been a benchmark programme in terms of how BAE Systems Australia and BAE Systems UK engineering teams, together with industry partners and RAAF technicians, have collaborated to deliver this enhanced capability ahead of schedule.”

The final upgraded Hawk will be delivered to the RAAF during the course of 2019.

On October 22, 2018, the RAAF also announced that its tenth F-35A Lightning II had arrived at Luke Air Force Base in Arizona. The aircraft A35-010 (c/n AU-10) and the ninth aircraft A35-009 (c/n AU-09), which was delivered in September, will become the first of 72 on order for the RAAF to be permanently based in Australia.

The two aircraft are due to touch down at RAAF Williamtown on December 10, 2018 and will begin a two-year verification and validation programme in early 2019, to ensure the aircraft is compatible with the ADF’s local infrastructure.

The pair were delivered to 3 Squadron, which is the first of three RAAF Hornet Squadrons and an Operational Conversion Unit to transition to the F-35A prior to the end of 2023.

Minister for Defence, Christopher Pyne, said: “This is a key milestone in our acquisition of the Joint Strike Fighter.” He added: “Until now, all deliveries went to the F-35 International Pilot Training Centre.”

Throughout September and October 2018, teams from the RAN and AAvn have been conducting FOCT between the Army’s Tiger Armed Reconnaissance Helicopter (ARH) and HMAS Canberra, one of Navy’s two Landing Helicopter Dock ships.

The trials are the third attempt at qualifying the ARH capability for shipboard operations, after two earlier trials were aborted due to mechanical problems with the Navy’s LHDs and earlier Kanimblaclass Landing Platform Amphibious (LPA) vessels.

The FOCT programme is being conducted by a team from the Aircraft Maintenance and Flight Trials Unit (AMAFTU) and is designed to deine the safe environmental conditions for shipboard operations.

Lieutenant Viruben Watson, a Flight Test Engineer with AMAFTU, said: “The formal test report is one of the key documents which facilitates certification of the helicopter type to operate with that class of ship. In this case we’ve flown over 50 hours across 27 sorties and performed over 275 recoveries and launches. This data will be evaluated by AMAFTU personnel and used to provide a compilation of recommended ships’ helicopter limits for publication by the Fleet Aviation Officer.”

Trial Director, Lieutenant Commander Angus Hamilton added: “A composite team of personnel from all three services combined to deliver all trial objectives identified at the commencement of this process.”

He also added: “After evaluation and analysis on our return to AMAFTU, we expect to be able to deliver the largest possible proposed Ship Helicopter Operating Limit, a critical step in introducing the ARH Tiger embarked capability.”

The Tiger is the last of the Army’s combat helicopter types to undergo clearance and it will begin operations with an Air Combat Element also comprising the NHI MRH90 Taipan and Boeing CH-47F Chinook during 2019. 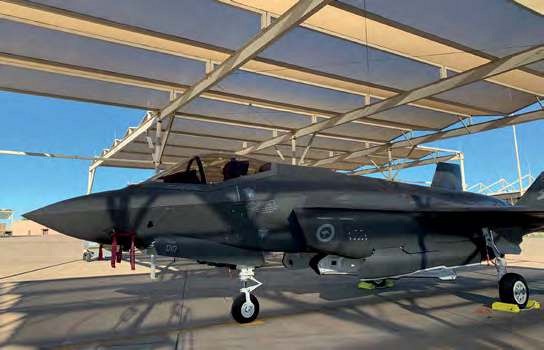 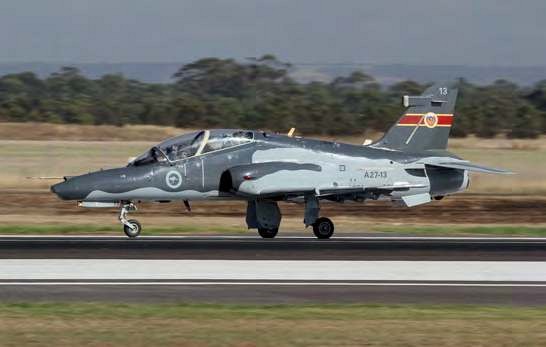 The final Hawk Mk127 like this one has been finducted for upgrade.
Nigel Pittaway