The RF-84F Thunderflash was an important derivative of the standard Thunderstreak. Malcolm V Lowe tells the story of this tactical reconnaissance platform, which served with particular distinction in French colours 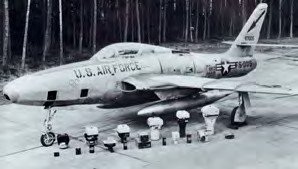 The array of aerial cameras that could be fitted in the RF-84F’s nose and forward fuselage was impressive, as shown in this contemporary publicity image. In practice, not all of these were required on any single mission.
ALL MALCOLM V LOWE COLLECTION UNLESS STATED

In parallel with the creation of the fighter/fighter-bomber F-84F Thunderstreak, development of the cameratoting RF-84F Thunderflash was also undertaken by manufacturer Republic Aviation. The abbreviation ‘RF’ stood for Reconnaissance Fighter in US designation terminology, and this variant proved to be a useful member of the overall F-84 family.