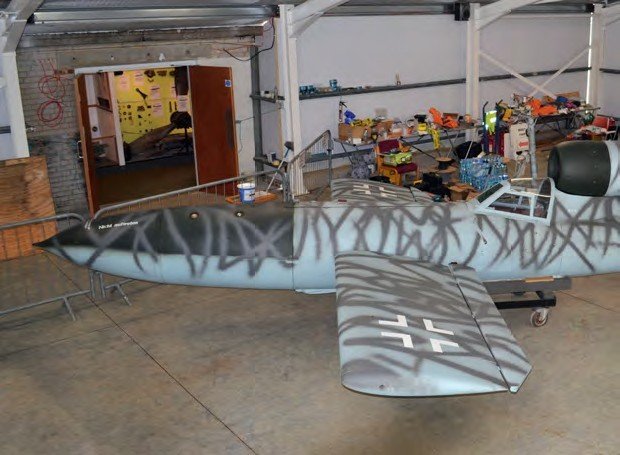 The sinister Fieseler fi103R-4 Reichenberg at Headcorn, Kent, an area where its unmanned brethren made their presence felt more than 70 years ago.
SONJA BAILEY/LAWM

THE Lashenden Air Warfare Museum’s rare Fieseler fi103R-4 Reichenberg went on show in a new display hangar at Headcorn aerodrome, Kent on 2 July. The machine can be seen from a viewing enclosure in the building while work continues to fit out the hangar with displays.

The manned V1 is one of only six survivors from the 175 built. The Reichenberg was intended for use against shipping or heavily defended ground targets, its major progenitors including test pilot Hanna Reitsch and SSHauptsturmführer Otto Skorzeny. Such was the urgency placed on the project that within 14 days of the Reichenberg programme being authorised, training and operational variants had been completed and testing started.

The operational model was the Reichenberg IV, which was intended to be carried to the vicinity of its target beneath a Heinkel He 111 bomber. In theory the pilot was intended to jettison the cockpit canopy and bail out after aiming his aircraft at the target, but it was calculated that his chance of survival was little better than one in a hundred. At the estimated target approach speeds of 490-530mph it is highly improbable that jettisoning the canopy would have proved practical.

The museum’s fi103R-4 is believed to have been captured at the Dannenberg V1 factory by the 5th Armoured Division, US Army. It was displayed as part of the German Aircraft Exhibition at the Royal Aircraft Establishment at Farnborough from 29 October-9 November 1945, fitted with a standard fi103 nose cone as there was no nose with the fi103R-4 when it was captured.

At the end of the exhibition the Reichenberg was passed to the bomb disposal service and placed at the Joint Services Bomb Disposal School at Broadbridge Heath near Horsham, Sussex. In 1967 it was transferred to a territorial bomb disposal unit at Fort Clarence, Rochester, where it was covered in thick black paint and left outside.

When the Lashenden Air Warfare Museum opened in 1970 a team visited Fort Clarence to acquire some bombs for display, and was told that the Reichenberg was due to be scrapped. After acquiring the machine, museum volunteers carried out a cosmetic restoration to prevent any further deterioration.

During November 2007 the machine was moved to Geisenhausen near Munich, where the restoration was carried out by V1 specialist Alexander Kuncze and his team at the Auktionshaus für historische Technik. Work included replacement of the nose cone, as the one previously fitted was not the original. Some of the skinning on the rear fuselage needed replacing, the wing main spar was replaced, and the wings re-covered in the correct grade of plywood. The cockpit has been fully fitted out with original working period instruments, electrical fittings and so forth.

The fi103R-4 has been finished as it was when displayed at Farnborough in 1945, and is listed as a ‘benchmark’ aircraft in the UK’s National Historic Aircraft Register as being of world, national and technical significance.