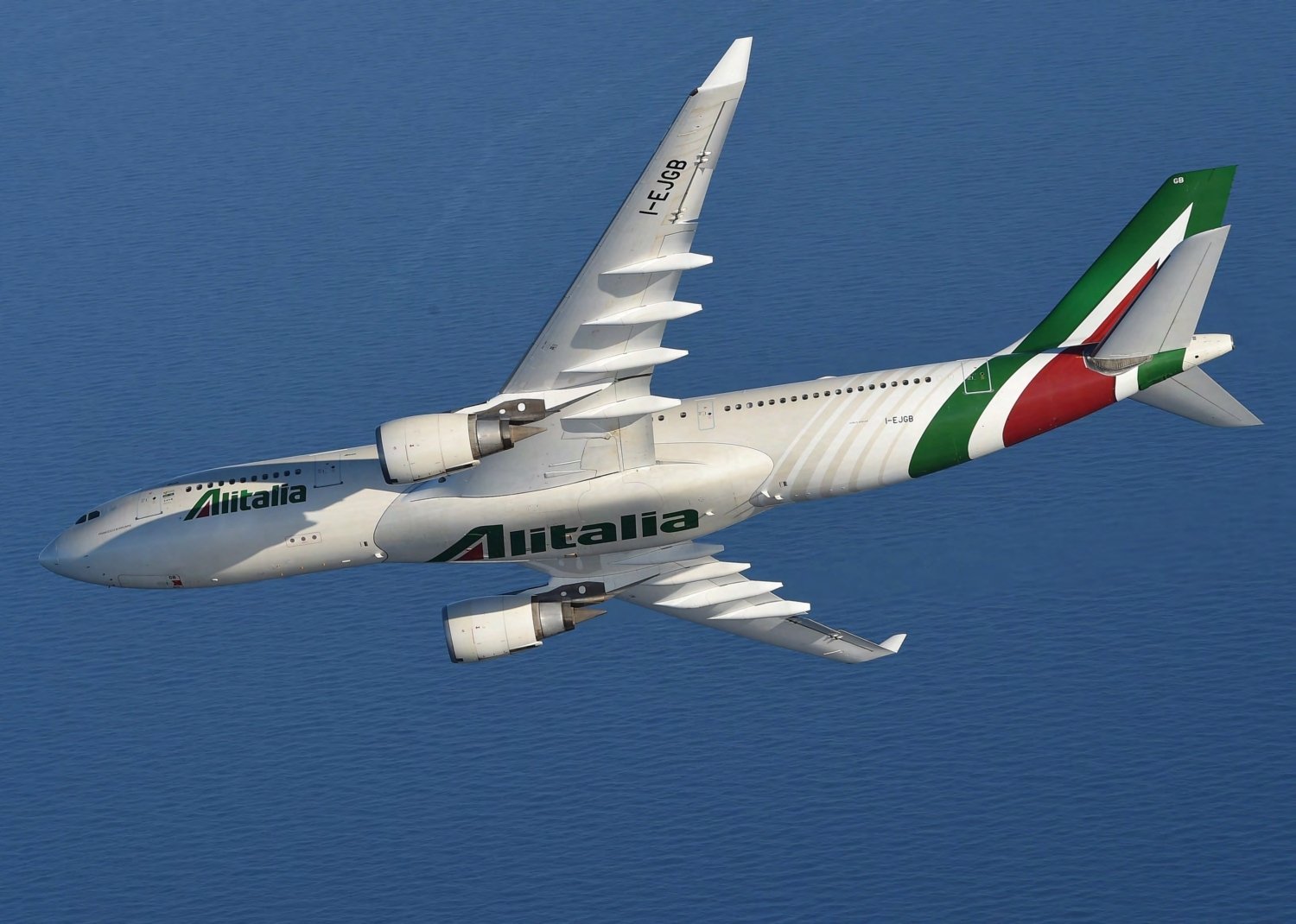 Pope Francis has a problem. The pontiff is a frequent flyer on Alitalia, mostly on long haul. And Alitalia’s premium service is of such high class that the Holy Father deems it to be too luxurious. “The Pope wants his meal to be served on a tray, but in our business class we have now abandoned tray service and serve everything à la carte at your seat,“ says Barbara Accardi, Senior Manager in Alitalia’s new training centre at Rome’s Fiumicino Airport.

Flights for papal trips are chartered by the Vatican, and routinely they were very lavish affairs. For the predecessors of the current Pope – for example the trip of Benedict to Cuba in 2012 – the whole front of a Boeing 777 cabin had to be remodelled. All seats were removed and in came a proper bed and a studio with work desks and meeting tables, with religious icons from a cross to ancient paintings installed in the cabin.

None of this happens any more, according to Accardi: “Francis insists on the same cabin as usual and doesn’t want any other privileges.”

The change is just one of many at Alitalia. Since January 2015, the Etihad Group of Abu Dhabi has held a 49% share in the perennially loss-making Italian state airline it bought for €560 million, and which since its foundation in 1946 has only made a profit in one year, 1998.

Since Etihad came on board, everything has been in reset mode. In June 2015, Alitalia unveiled a modernised brand identity, which keeps the famous stylised green-red ‘A’ on the aircraft tails, introduced in 1970 for the first Boeing 747. Brand new in summer 2016 were the elegant uniforms by Milan based designer Ettore Bilotta, in red for flight attendants and green for ground staff.

With Alitalia now featuring exclusive home-grown products such as the uniforms and make-up with the claim ‘Made in Italy’ – the carrier wants to demonstrate it will again be a force to be reckoned with. Or, as Chief Customer Officer Aubrey Tiedt put it in an interview with AIR International in Rome: “I want Alitalia to be recognised as the best airline in Europe.”

If that happens it will be to a large part thanks to Tiedt. The charismatic, fast-talking Irishwoman with more than 25 years of industry experience under her belt, was essential in creating the current brand and product of Etihad, having worked in Abu Dhabi for years. She has also created totally new brands for the Etihad Group such as Air Serbia and Etihad Regional, and given major makeovers to others like Air Seychelles.

“When we took a stake in Alitalia it was clear this couldn’t be done from Abu Dhabi,” says Tiedt. So, she moved to Rome in 2015 on a three-year secondment and started her work alongside Cramer Ball, the new Chief Executive Officer, who led other Etihad partners like Air Seychelles and Jet Airways. “Our goal is profitability, not break-even, and we are on track for profitability in 2017,” Ball states.

In 2015, losses shrunk from €580 million in the previous year to €199.1 million. Chairman Luca de Montezemolo says: “Few airlines have undergone such radical change as the new Alitalia. We are delivering on our promise to create a world class airline.” 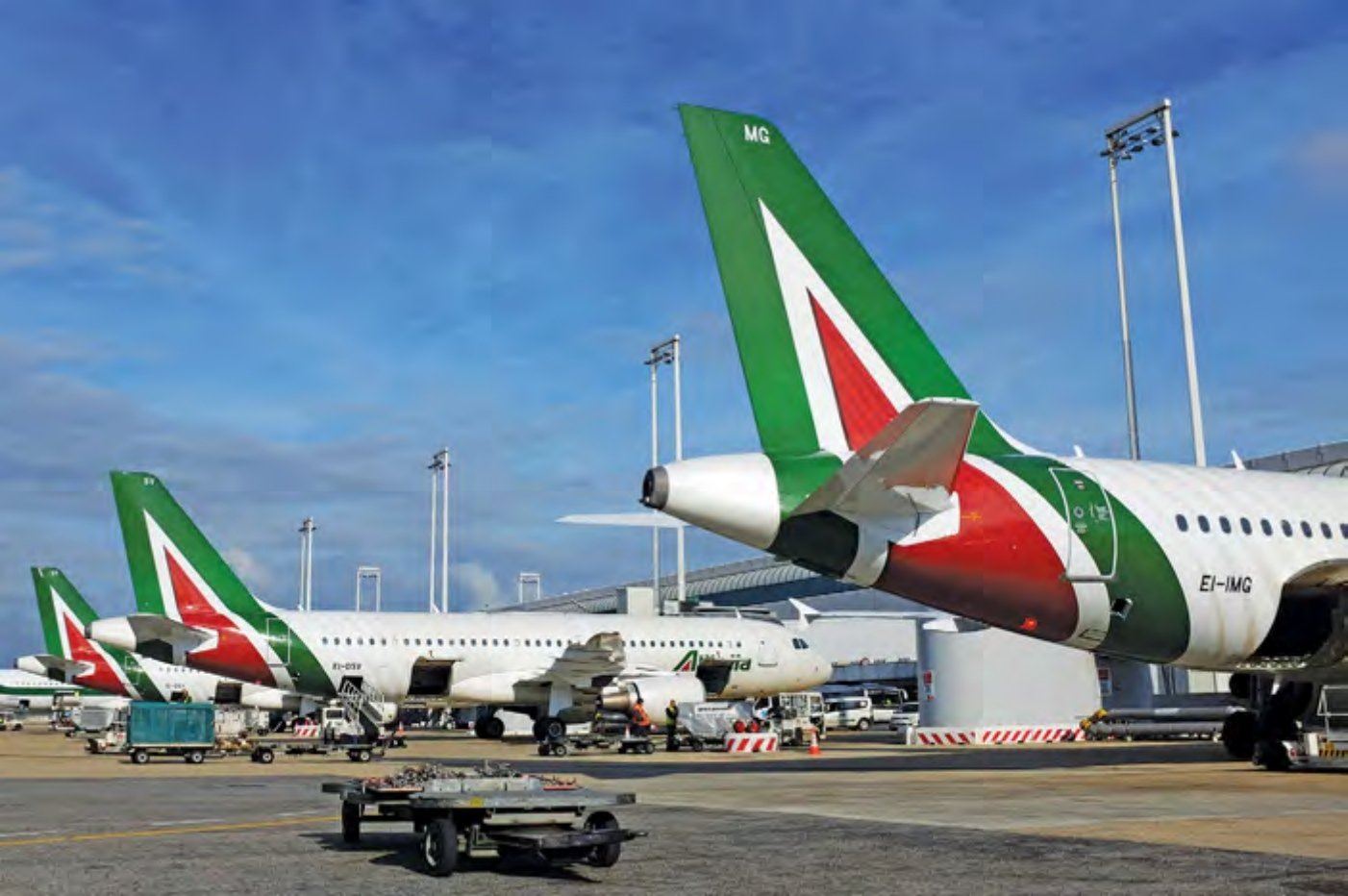 Much of Alitalia’s route network is short and medium haul, served by a fleet of A320 Family aircraft, pictured here, and E-Jets.
Alitalia This year has seen two more A330s join the fleet as Alitalia looks to grow in long-haul; another will arrive in 2017.
Andreas Spaeth

For the refurbishment, and not least because of cost reasons, Alitalia opted for evolution instead of revolution. It kept the same Sogerma Solstys seats (incidentally, the same model used in Etihad’s aircraft) and had them upgraded with an elegant cover of fine leather by the Italian brand Poltrona Frau.

Alitalia’s focus is on growing the long-haul business, which accounts for only 17% of its seats (domestic seats still account for 54%, making Alitalia vulnerable against low-cost carrier competition). This is reflected in the fleet composition: the 24 long-haul aircraft compare to 98 jets for short and mediumhaul routes.

Alitalia has been expanding its long-haul network in 2016, with new routes to Beijing, Havana, Mexico City and Santiago de Chile, Mexico were launched.

Executives from the new Alitalia state time and again that it is independent, not just a branch of Etihad, as critics have argued.

Tiedt asks: “Alitalia is a different brand, a different personality and has a different kind of customer than Etihad, so do we actually need apartments and studios on long haul as Etihad?”.

And she stresses that although there are things she would love to have for the airline, from a spa in the lounge to virtual reality for crew training, they are things Alitalia cannot afford. She says: “We are only half way into our turnaround with another 18 months to go, it’s not like we have loads of money so we have to be innovative.”

In contrast to a newly-founded company like Etihad, she can rely on the natural resources of Alitalia. Most of all, its experienced staff. The average age of the 3,500 cabin crewmembers is 38 years, unusually high for the industry.

Despite hard times and repeated nearbankruptcies, the loyalty of employees is high. Now the aim is to bring out the abilities, talents and self-confidence that had been lost or neglected.

“Our crews are knowledgeable, they have experience, but there was zero confidence before,” observes Tiedt. “And if they don’t have the confidence to use their potential, nothing happens.” Tiedt likens Alitalia to an unpolished raw diamond at the time she started.

One of the most important investments overall was the opening of the €5 million Alitalia Excellence Training Academy in Fiumicino. There was nothing like it before. One of Europe’s biggest airlines simply didn’t do any training for crews and other service staff in dealing with customers. Accardi explains: “It ended in the early 1990s, afterwards there was just safety training and refresher courses as well as initial training for beginners. Otherwise you would just train on a computer or it was simply learning by doing. Service training was just regarded as a cost factor, and costs always had to be cut, while today it’s a totally different philosophy and it’s seen as investment.”

Alitalia is seeking to grow its long-haul business and has introduced a new business class on its A330s and Boeing 777s.
Alitalia 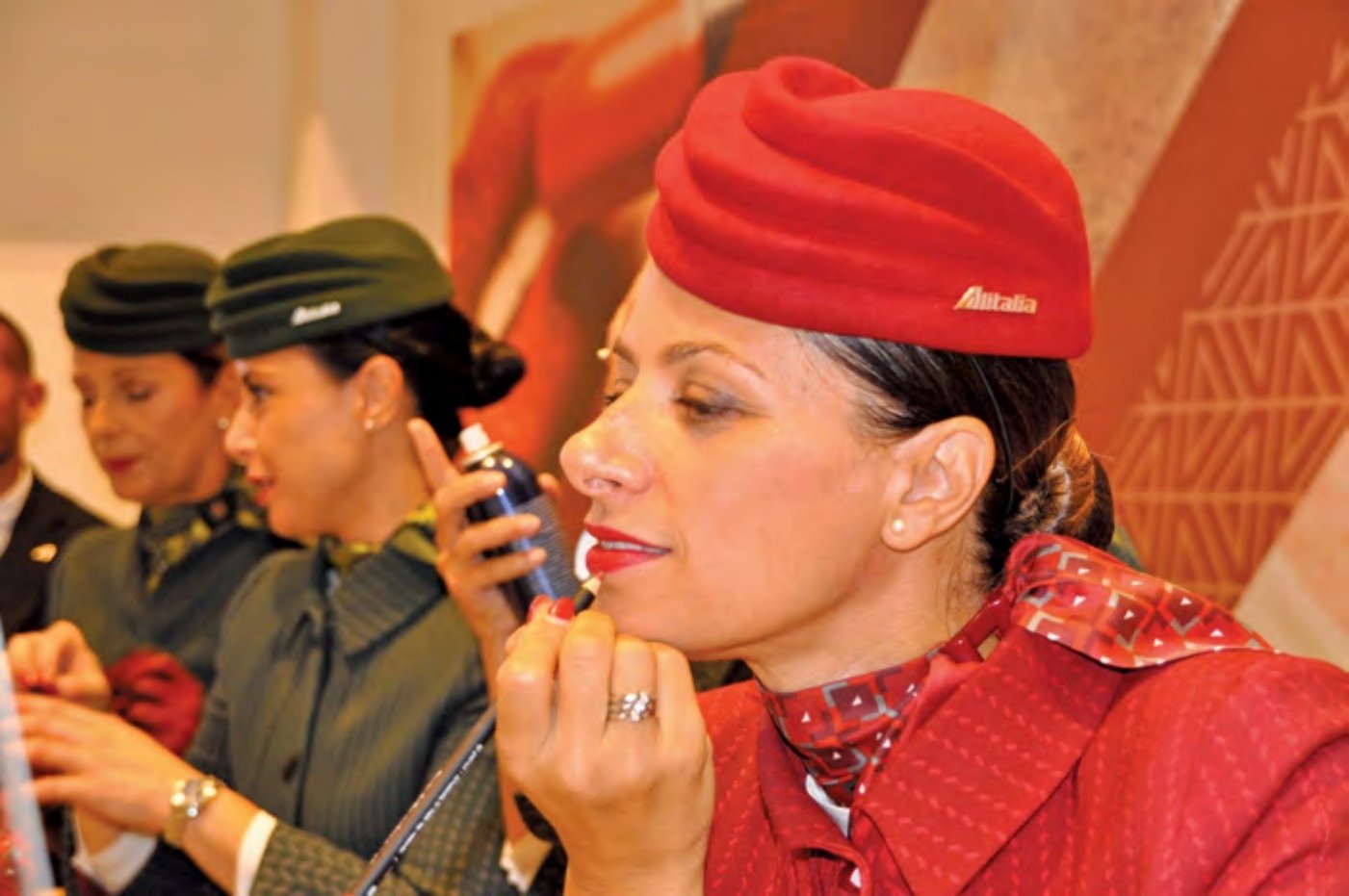 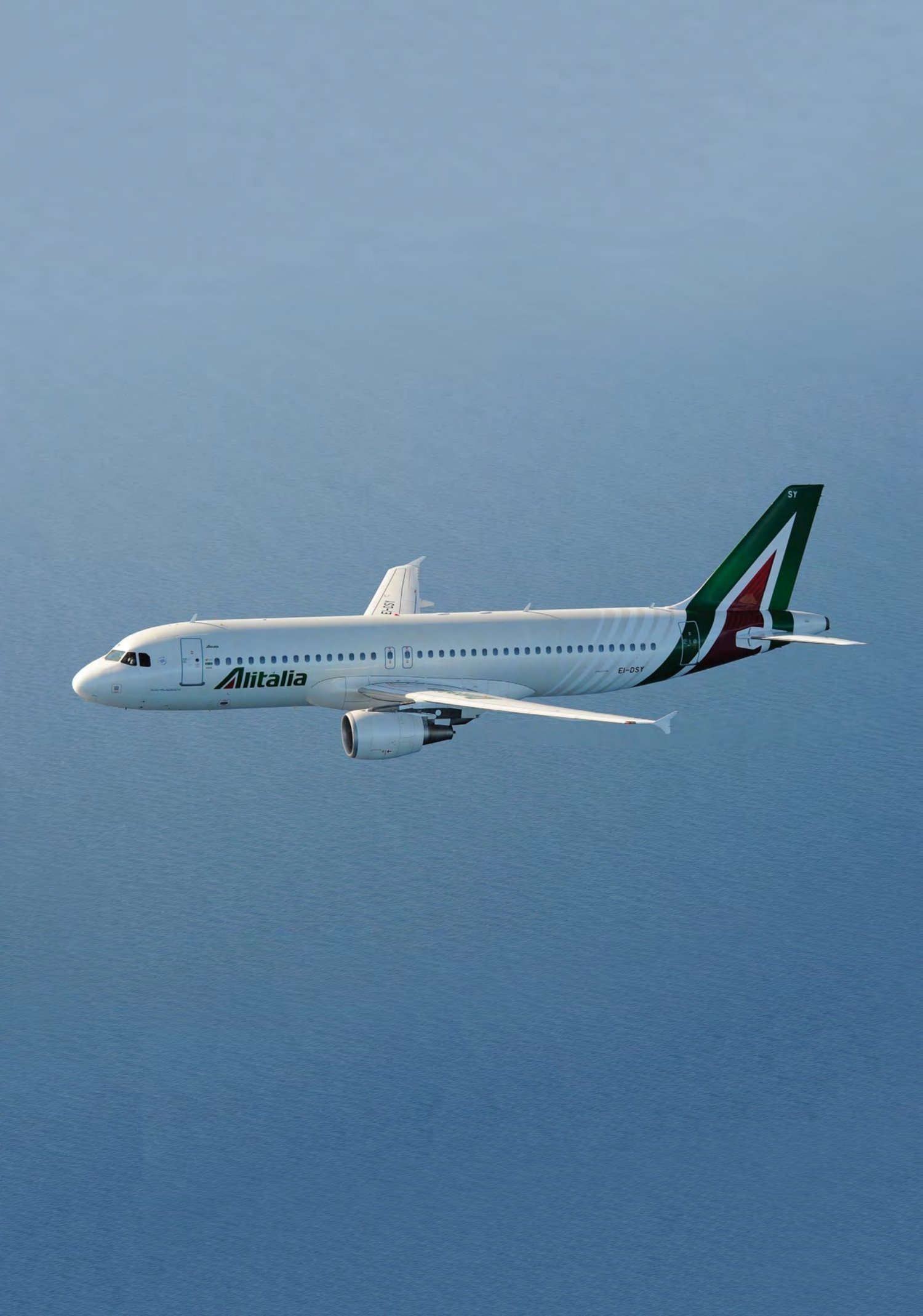 Alitalia currently operates 78 A320 Family aircraft on its European network, including A320 EI-DSY (msn 3666).
Alitalia

Interestingly, Alitalia did not hire any outside trainers. Instead employees could apply to become trainers, and 300 wanted to coach their colleagues. It’s a novelty to train ground and cabin staff in integrated classes of 16, providing interesting insights and mutual understanding. All people involved in the service chain, even the drivers of Alitalia’s own passenger buses on the ramp, have been trained at the Academy since September 2015.

“Training is supposed to be fun, not boring”, says Accardi. That’s exactly what the visitor to the academy encounters. There is even a room where the ladies learn how to apply make-up – the new corporate lipstick in a colour called ‘Rosso Alitalia’, created by Diego Dalla Palma in Milan and soon to be available in retail. Or at the food presentation, where almost everything on any plate or in any glass hails from Italy.

Tiedt says: “We can draw on this Italianness. Hospitality is already there, the people are very warm, family-oriented, love good food, everywhere in the world people love Italy, that’s a big asset.”

It is not all smooth sailing at Alitalia yet, as the looming threat of pilots’ strikes have shown. But the first achievements have become visible. The market share of Alitalia on flights to and from Italy rose by four to 30% in 2015. In May 2016, customer satisfaction was at 91.4%, the highest score since surveys started in 2012. “It’s a completely different airline than 12 months ago, how the staff behave, how they talk, how they walk, it’s been a tremendous change,” states Tiedt.

But that’s not a reason for her to rest on her laurels: “We now have to build more consistency across what we do, and review the offerings on our narrowbody and short haul fleet. We need more investment on our digital side and finish the rest of the 777 fleet with connectivity, also there are two big lounges coming up here in Rome.” These lounges are now called ‘Casa Alitalia’ and have a similar concept to Etihad’s lounges, working with open kitchens. In Rome and Milan-Malpensa, pasta and pizza are freshly prepared on the spot. Almost a pity, then, that Pope Francis won’t experience this.

Network: 97 destinations worldwide, of which 27 are domestic within Italy