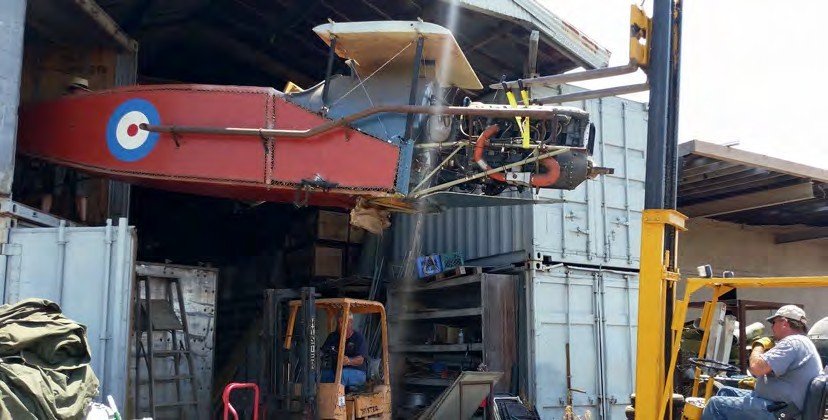 The fuselage of the Death Hunt Bristol F2B replica being removed from its container in Los Angeles to begin the long journey to its new home at Omaka. GRAHAM ORPHAN

Four Bristol F2B Fighter replicas built in the late 1970s for the film High Road to China arrived at Omaka, New Zealand on 24 August, following acquisition by Graham Orphan from an owner in California.

Orphan, the director of the Classic Fighters Airshow at Omaka, had been looking for the aeroplanes for years. With the help of Sonoma-based warbird pilot Chris Prevost he finally tracked them down to a warehouse just east of Los Angeles, where they had been hidden away for several decades.

Orphan said, “As it turns out, all seven aircraft had been acquired by an old guy whose core business seemed to be following movie studios and acquiring film props on the cheap. He’d created this bizarre condominium of containers stacked on top of each other. Fortunately, the things we wanted were in the top containers.”

A total of seven of the Ranger-powered F2Bs were built for the film, but all the effort went to waste when the director chose not to use them. At least one of the machines did eventually see use on the big screen in production of the 1981 film Death Hunt, starring Lee Marvin and Charles Bronson.

Graham and his team will now conduct an intense inventory and work schedule plan for all four aircraft. A couple will be sold on to recover some of the costs, but at least one of them will remain at Omaka. Orphan adds: “It seems appropriate. In 1928, the first aeroplane ever to land at Omaka aerodrome was an F2B.”