Return of the Mayfly 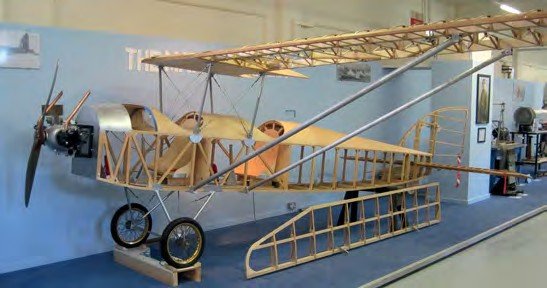 The replica Halton HAC1 Mayfly in the James McCudden Flight Heritage Centre at the Trenchard Museum at RAF Halton. Note the huge aileron on the floor.

Construction of a replica of the Halton HAC1 Mayfly ultralight is progressing well in the James McCudden Flight Heritage Centre at the Trenchard Museum at RAF Halton. The original machine, G-EBOO, was funded and built during 1926-27 by the Halton Aero Club, whose membership comprised staff and apprentices from No 1 School of Technical Training at Halton. The two-seat, 32hp Bristol Cherub III-powered machine was designed by one of the instructors, C. H. Latimer- Needham, to compete in the September 1926 Lympne Light Aircraft Trials, but wasn’t completed in time, making its first flight on 31 January 1927 in the hands of Flt Lt C. F. Le Poer Trench.

After conversion to singleseat configuration, the Mayfly had a busy year in competition, and was flown in the King’s Cup by Le Poer Trench — an Australian World War One SPAD pilot — who was forced to retire the aircraft at Hucknall when it ran out of fuel. It was to fly for a total of 40 hours before being converted into a parasol monoplane, the Halton HAC II Minus. On 7 July 1928 ’BOO was placed second in the Blackpool Open Handicap Race at a speed of 87.75mph, going on to win the Wakefield Trophy at Hamble piloted by Le Poer Trench, who also flew it in the King’s Cup, retiring at Leeds with a broken magneto drive. A third King’s Cup entry in 1929 saw another retirement, at Newcastle, and upon damage in a heavy landing the following year the machine was broken up at Halton.

Francis Hanford from the Trenchard Museum says, “Though not intended to fly we have done our best to build the Mayfly to airworthy standards, where this is possible within our very limited budget. We were also handicapped considerably by our inability to find any detailed drawings and have had to work from the threeviews drawn by Latimer- Needham published at the time and some contemporary photographs. Initially it was intended to replicate the original two-seat sesquiplane but, with the retirement from the project by the original builder, his successors have opted for its later development as a parasol monoplane. This enabled the original to increase its speed considerably. We have been unable to find a Bristol Cherub, but have been lent an ABC Scorpion of similar vintage and appearance by the RAF Museum. The builders are wrestling with the design and construction of an aileron control system. There is currently no forecast for a completion date.”

The original biplane Mayfly, G-EBOO, having the 32hp Bristol Cherub III run up by Flt Lt C. F. Le Poer Trench prior to its maiden flight on 31 January 1926.

After leaving the RAF in 1935, C. H. Latimer-Needham formed Luton Aircraft, designing the Luton Buzzard, Luton Minor and Luton Major. Soon after the outbreak of war he became acting chief technical officer to the Airborne Forces Experimental Establishment, going on to become an assistant designer at Avro, and then chief engineer for Alan Cobham’s Flight Refuelling Ltd. He crewed on several flight trials, including a 1947 non-stop sortie from London to Bermuda in an Avro Lancaster flown by AVM Don Bennett.

Latimer-Needham also authored the two-volume reference work Aircraft Design, a copy of which the management of Oflag IV-C at Colditz Castle incautiously placed in the prison library. It proved to be an invaluable source of information for Flt Lts Bill Goldfinch and Jack Best as they set about building the now legendary Colditz ‘Cock’ glider in the attic above the castle’s chapel.

The final version of the Corsair to enter US military service, the AU-1 was a dedicated low-level ground attack variant, developed from the F4U-5 specifically for the US Marines. The prototype, originally designated as the XF4U-6, first flew in January 1952, and 111 were built between February and October of that year. The AU-1 was fitted with increased armour protection and, because it was intended solely for operation at low level, the R-2800 engine had just a single-stage supercharger supplying only 2,300hp, the previous F4U-5 version having 2,800hp on tap.

This F4U-7 was delivered to the Aéronavale base at El Karouba, Tunisia in November 1953. and is thought to have seen combat in Indochina, Egypt and Algeria. Retired from service in 1964, it arrived at the Marine Corps Air-Ground Museum at Quantico, Virginia on a barge that August. Restored over the next few years for static display at the museum, in 1971 it was disposed of and, after restoration to fly, became one of the stars of the Baa Baa Black Sheep television series. It was flown by Canadian pilot Blain Fowler as Alberta Blue at shows in the USA and Canada from 1983-2004, and was acquired by John O’Connor in December 2004. No original AU-1s now exist.