The latest books and products for the discerning aviation enthusiast 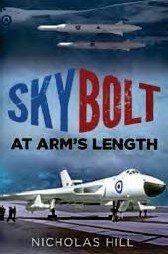 While the title might suggest that this volume concerns itself solely withBritain’s plans to put the Douglas GAM-87 Skybolt air-launched ballistic missile into RAF service in the 1960s, its actual scope is considerably wider and covers many other missile proposals and projects for the RAF’s bomber force. Following the cancellation of Blue Steel Mk2 in 1959, the RAF was running seriously short of options to maintain the viability of its ‘V-bomber’ fleet through the second half of the 1960s and beyond. Skybolt was seen as the way forward, to be mounted underwing on the Vulcan B2, on the Victor B2 (if ground clearance issues could be resolved; they could not) and possibly even on the VC10. The problem was that Skybolt was an American project, and when it encountered difficulties and a string of test failures it was summarily cancelled by the US government late in 1962, causing a crisis in UK defence planning and leaving a severe dent in the ‘special relationship’.

This is a well-told account of the Skybolt’s development and testing, suitably if not copiously illustrated and sadly without an index. It details the plans for Skybolt that ultimately came to nothing, and the subsequent political haggling that resulted in an agreement to supply Polaris SLBMs and to the British deterrent moving from the RAF to the Royal Navy — cue much gnashing of teethin air force circles. Fascinating, engrossing, revealing, recommended. Denis J. Calvert

A Carrier at Risk by Mariano Sciaroni and published by Helion 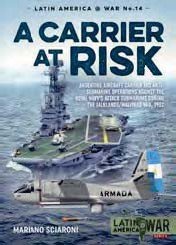 Issued as No 14 in the ‘Latin America @War’ (yes, ‘@’ — ugh) series, this covers a small but important aspect of the Falklands War of 1982, namely Argentine aircraft carrier and anti-submarine operations against Royal Navy attack submarines. The author carried out his research for this book bothin Argentina and in the UK, in the latter case making full use of this country’s Freedom of Information Act in his attempt “to match up the story of what had happened on the surface withthat which had taken place below”. Argentine forces were hindered bothby obsolescent equipment and by an American embargo on the supply of war materiel, while their ASW procedures and training proved inadequate against the Royal Navy’s nuclear attack submarines. There’s good coverage of Argentine operations in the war, of a contact withand an attack upon a mystery (British?) submarine on 5 May, and of the successful eff orts to protect their carrier 25 de Mayo. The text has been translated from Spanish and reads well. Better, the author has largely avoided taking a partisan approach to his subject. The photo selection is to be commended for its originality. DJC

I’ll Call You Pod by Kenneth B. Senar and published by Austin Macauley 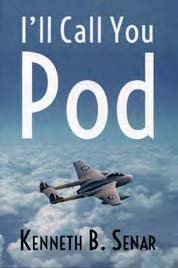 This softback volume surely has the most intriguing title I’ve seen in many years of book reviewing. ‘I’ll Call You Pod’, but why? Sub-titled ‘Cold War Recollections of a Low Level Pilot 1951-1958’, this is an account of the author’s career in the RAF, “from National Serviceman to Flight Lieutenant” as the blurb states. It’s a good read, penned witha suitably dry sense of humour and a degree of self-deprecation.

Following completion of his flying training, he was posted to RAF Jever in West Germany to fly Vampires, then Sabres. This account centres on life in the RAF in the 1950s, but does not by any means revolve totally around aeroplanes or flying. While it relates in some detail the joys of practice air-to-ground rocket firing on the Meppen range, there are discussions on such diverse subjects as RAF evasion exercises, riding a bicycle on the wrong side of the road and discouraging moles in the gardens by the station HQ. As to the meaning behind the title, you’ll either have to buy the book or ponder any possible connection withthe author’s surname. DJC

Champions of Flight by Sheryl Fiegel and Theodore Hamady. Published by Casemate 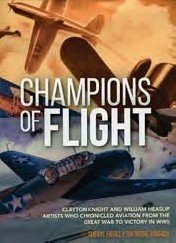 Your reviewer is wary of books written by aviation painters that regularly feature whole-page examples of his/her works and, all too often, overblown accounts of ‘my five years of research that allowed me to make it all look so lifelike’, the whole accompanied by the cacophonous sound of blow-your-own trumpets. This one is different, because the two American artists featured, Clayton Joseph Knight and William John Heaslip, were born in the 19thcentury, were bothmilitary men and died 50 years ago. They thus lived and worked through the years between Lindbergh’s epic trans-Atlantic flight and the end of World War Two, producing illustrations and artwork for diverse publications. The authors, who had access to bothfamilies’ archives, have succeeded in putting together a highly illustrated volume which covers the artists’ lives while at the same time relating the aviation history of the era. Reproduction of the illustrations, which range from a set of trading cards produced for H. J. Heinz to a gloriously patriotic ‘all-action’ recruiting poster featuring a painting of a B-26 Marauder and imploring young men aged 17-18 to join “Army Air Forces — the greatest team in the world”, is every bit as good as you’d hope. The text reads well and is genuinely informative and interesting. DJC 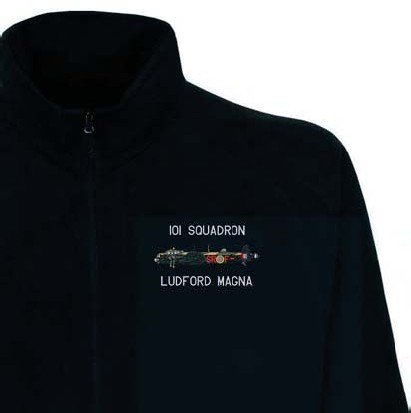 GDMK Images has launched a new range of personalised clothing featuring embroidered aircraft. The different aircraft designs available can be modified to show particular squadron colours and markings, withbespoke wording that can take in a name, last mission date, numbers of missions, service and loss dates — basically, whatever you want to include in memory of a friend or relative. The embroidery is available on all GDMK’s clothing — polo shirts, sweatshirts, hoodies, fleeces, hats and bags. The garments themselves are high-quality products from reputable manufacturers such as Regatta, RTX Pro and Beechfield. The example shown here is a personalised fleece depicting a No 101 Squadron Lancaster. 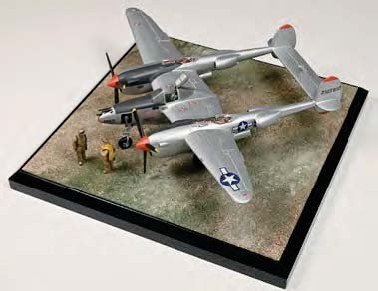 The latest 1:72-scale release from highquality pewter model-makers Staples & Vine is the P-38 Lightning. Two versions of the Lockheed fighter have been produced: here we show the P-38J model, specifically 42-103993 Marge as flown by Capt Dick Bong of the 49thFighter Group in the south-west Pacific, complete withvery accurately rendered nose art. Also available is an olive drab-painted P-38G. Bothare strictly limited editions of 25 examples each. 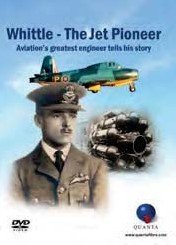 Very welcome indeed are these two feature-lengthTV documentary releases from Quanta Films. The formats, in each case, are straightforward: extended filmed interviews witheach of these two great figures in British aviation. The chance to hear bothFrank Whittle and ‘Winkle’ Brown outlining their lives and careers in such depthis, it goes without saying, of great value in historical terms. Above all, it makes for compelling viewing. Other relevant interviewees, such as German jet pioneer Hans von Ohain, are included in the Whittle film as a means of outlining the story of gas turbine power; withthe exception of the linking narration, Brown’s story is told entirely in his own words.

Highlights are many: this reviewer found Whittle’s recollections of his early life especially interesting, while it is good to hear Brown discussing his lesserknown post-war activities, including his association withthe nascent West German naval air arm and his Fleet Air Arm staff postings.

Bothof these unique, high-quality productions are available from Quanta’s new website, as part of its British Aviation Genius series. They come not just as DVDs, but also Vimeo downloads, watchable on all major platforms. Ben Dunnell

Dauntless: The Battle of Midway 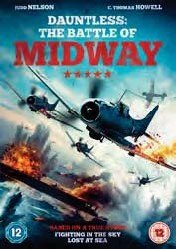 Bayou Pictures’ Dauntless: The Battle of Midway is one of two Midway-themed films released this year, the first since 1976. Dauntless differs in being a lower-budget affair withno big-name actors, and a narrower focus: SBD pilot Norman Vandivier (Jade Willey) and inexperienced gunner Lee Keaney (John Enick), who ditch early in the battle and drift, hoping for rescue.

Visual effects rely on CGI and greenscreen, but are solid. Scenes of SBDs launching from USS Enterprise to the strains of Gustav Holst’s Jupiter are enjoyable, even impressive, while the confusion and muddle of the early strikes is accurately portrayed. The battle is brief but frenetic and exciting, followed by a nail-biting ditching. The tension ramps up as Vandivier and Keaney struggle to maintain hope while battle fleets grapple, senior officers clash over aircrew safety and a PBY searches for survivors in hostile seas.

There’s little triumphalism, and Dauntless excoriates the decisions that led to so many aircrews lost and ditched. It’s most successful in maintaining tight focus on the handful of main characters while evoking the shape of the action, and in bringing under-appreciated aspects of the events at Midway to the fore. The scenario asks much of boththe script and the actors, and if they sometimes struggle, the sense of unnecessary sacrifice is very clear. Dauntless is a poignant, human-scale story within a vast battle. Matthew Willis