Bob O’Brien recalls trips to Manchester Airport during his formative years in the 1960s and 1970s and shares some of his images from the time. 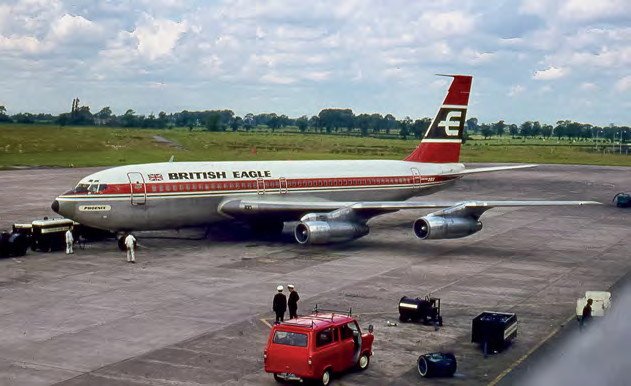 British Eagle used this former Qantas Boeing 707-100, G-AWDG (c/n 17702), on transatlantic services from March 1968 to January 1969. Remarkably, the 1959-built jet was airworthy as recently as 2015, operating as 9Q-CLK on behalf of the government of the Democratic Republic of Congo in a livery reminiscent of Boeing’s current house colours.

Growing up in Liverpool in the early 1960s, I was fortunate that our house was under the approach path to Speke Airport’s Runway 26. My passion for aviation grew over the years and I spent many a day on the terminal’s balconies with the Shorrock Mk.V airband radio I received from my parents for my 12th birthday. At the time, the Liverpool hub played host to a range of airlines, including British Eagle, Starways, Aer Lingus, BKS Air Transport and Cambrian Airways. Unknown to me at the time, Cambrian would be the catalyst for my career in cabin services with British Airways.