In the first of a new regular series, Russian aerospace expert Piotr Butowski reports on some of the latest developments from the country’s aircraft industries. This month, the surprising return of the Il-114 regional airliner. 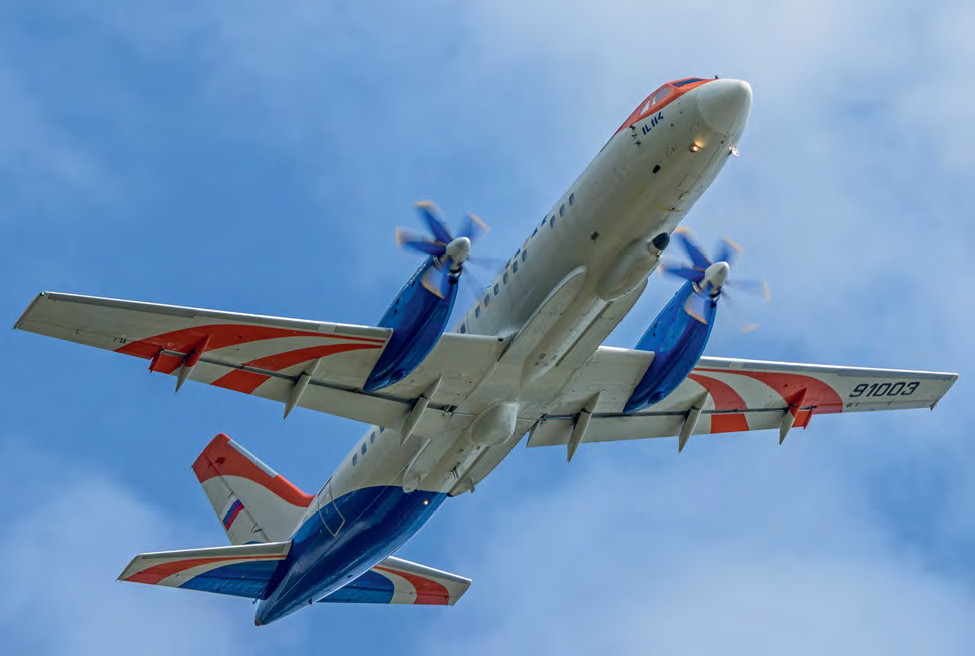 Owned by Radar-MMS, this Il-114LL is the only example of the Il-114 twin-turboprop family currently flying in Russia.
Piotr Butowski

With little fanfare, the first Il-114-300 rolled out of the Ilyushin workshop at Zhukovsky, Moscow, on December 28, 2019. The lack of publicity was explained by the fact that the aircraft was incomplete. In particular, the cockpit equipment and aircraft control system installed were provisional versions. The aircraft had, however, been painted – the company’s press release focused on “the unique painting of the first test copy of the Il-114-300”.

The Il-114 is not a new design – this regional turboprop made its maiden flight in March 1990. Following three prototypes, 15 production aircraft were completed in Tashkent, Uzbekistan, between 1992 and 2012. In a similar class, Russia also produced the slightly smaller 52-seat An-140 (designed in Ukraine, but built in Samara), and considered assembly of the Bombardier Q400 under licence. In 2014, after the annexation of Crimea and introduction of Western sanctions, these two programmes were put on ice.

On August 9, 2014, President Vladimir Putin requested a reassessment of indigenous regional airliner options, and, on November 3, 2015, he ordered production of the revised Il-114-300 version in Russia. The reasons are interesting – the aim of the Il-114-300 is not to generate revenues with a viable commercial product. A government resolution on financing the programme, made on December 26, 2016, outlined its primary goal as “utilisation of capacity of the aircraft industry enterprises” Its second aim is “to reduce dependence of Russian air transport on purchases of foreign aircraft.”

Various locations were considered for aircraft production, including the plants in Samara and Nizhny Novgorod. Ultimately, the work was divided between several factories. VASO in Voronezh makes the wing centre sections and outer panels, tail units and engine nacelles, making up 40% of the airframe elements. Sokol in Nizhny Novgorod is responsible for fuselage sections. Aviastar-SP in Ulyanovsk produces individual fuselage panels, as well as doors and hatches. Final assembly is completed at a facility in Lukhovitsy belonging to Russian Aircraft Corporation (RSK) MiG. The planned production rate is 12 aircraft per year.

Among the possible military options is the Il-114MP multi-role patrol aircraft, fitted with the Kasatka mission system combining a 360° radar installed under the nose, electronic support measures with six cruciform antennas around the fuselage, and a magnetic anomaly detector (MAD) on the tip of the tail fin.

An under-nose electro-optical turret is provided for surveillance and navigation. The only example of the Il-114 currently flying in Russia is the Il-114LL (Letayushchaya Laboratoriya, flying testbed) used by the Radar MMS Company of St Petersburg for trials of elements of the Kasatka mission system.

The first Il-114-300 rolled out in Zhukovsky in December is actually the overhauled and upgraded Il-114 serial 01-08, manufactured in Tashkent in January 1994 and then flown with the registration RA-91002. Among other airshows, it performed at Farnborough in 1994. As the Il-114-300, it is expected to fly for the first time later this year.

The sub-systems for the first new aircraft are now in production. Ilyushin’s press release from December quoted Yuri Grudinin, the company’s chief executive, who announced that the first aircraft, made entirely in Russia, would fly at the end of 2020. In 2022, the Il-114-300 is expected to receive the AP-25 (the Russian equivalent of FAR-25) type certificate, before entering operation the following year. These announcements appear overly optimistic, since no previous deadline in the Il-114-300 programme has been met. In 2015, for example, it was declared that series production would start in 2019.

Aside from the delays, the Il-114-300’s biggest problem will likely be limited demand. It is dif icult to anticipate sales outside Russia, apart from a handful of countries unable to buy Western products. So far, Russian carriers have shown limited interest. The Aviakor plant in Samara assessed a demand among Russian airlines for just 31 aircraft. Politicians are much more optimistic. In March 2016, Dmitry Rogozin, Russia’s deputy prime minister, said Russian commercial carriers would need “at least 150 Il-114s” The most significant production may ultimately be for special-purpose versions for the military and other state services, whose combined demand has been estimated at more than 70 aircraft.

In the last week of December, the Russian defence ministry announced the delivery of a second new Mi-38T tactical transport and assault helicopter able to carry 40 soldiers. The handover was later confirmed by Russian Helicopters. The first example was commissioned for tests by the military earlier in 2019. 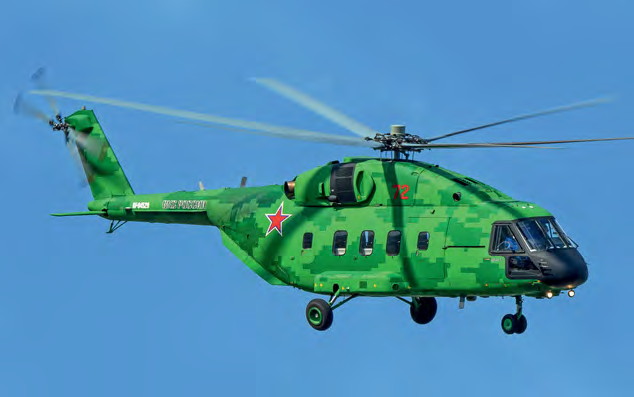 The contract for these two Mi-38Ts, concluded in July 2017, is so far the only order for Mi-38s manufactured by Kazan Helicopters. For the Russian defence ministry, the slightly smaller, but cheaper Mi-8AMTSh and MTV-5 helicopters are apparently judged suf icient for transport tasks. The Mi-38 can be used for other applications, for example as an airborne command post. Last May, Alexei Krivoruchko, the deputy defence minister responsible for acquisitions, announced development of such a version of the Mi-38.