Two months’ of meticulous planning, calculated to deliver the decisive blow, was unleashed by the Allies at 13:00 hours on February 22, 1945. A massive daylight offensive was targeting enemy transport and communication systems.

Two months’ of meticulous planning, calculated to deliver the decisive blow, was unleashed by the Allies at 13:00 hours on February 22, 1945. A massive daylight offensive was targeting enemy transport and communication systems.

This was Operation CLARION. Any mode of transport was fair game, any industrial site, anything which might interfere with the enemy’s infrastructure and plans, however small. 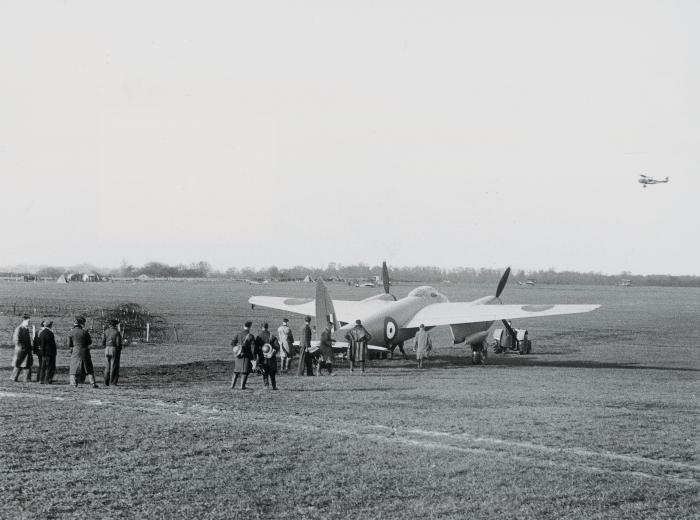 Approximately 9,000 aircraft were assembled, including 43 DH Mosquitos from 140 Wing, 2nd Tactical Air Force, based at Rosières-en-Santerre in France. The Mosquito VIs of 487 Squadron RNZAF were detailed to fly deeper than usual into Germany, reaching Bremen and Hamburg.

Since June 1944 the crews of 487 had operated mainly at night; for some of the personnel this was their one and only daylight sortie and for a couple it would be their last. One long-serving member, Don Ivey, from Ashburton, who joined the unit in April 1944, completed a tour of 65 ‘ops’ of which only two, including CLARION, were carried out in daylight.

During mid-January 1945 the unit had changed commanding officers and was now under Wg Cdr Reginald William Baker, from Dunedin, who had joined 485 Squadron RNZAF, equipped with Supermarine Spitfire IIs, in July 1941. During his time with 485 he participated in 186 operations and gained the DFC in September 1942. He converted to Mosquitos in November 1944.

During the basic planning stages concerning 487’s role in CLARION, disputes arose between Reg Baker and his flight commanders, as the CO insisted on taking the squadron into the target area at 1,000ft (394m). Flight commanders Ian Medwin and Bill Kemp, and senior officer Frank Denton, warned this would be extremely hazardous, verging on suicidal. But Reg would not be moved from his decision.

What was finalised during subsequent meetings is unknown but the pre-raid briefing and what actually occurred during the attack is well recalled by several crew members. Reg also insisted that this daylight mission, in which many NCO crews were keen to participate, was for experienced crews only. So the CO did not choose all-NCO crews, despite the fact that in some cases these were far more competent than the commissioned officers he did select.

For their role in CLARION, 487’s partners at Rosières, 21 and 464 RAAF Squadrons, were detailed to fly overland to their target areas, whereas 487’s instructions took them out to sea, around the top of Holland, making landfall between Bremerhaven and Cuxhaven. Detailed to work their allocated target areas in pairs and taking off at 11:00, the 18 ‘Kiwi’ Mosquitos headed north towards Dunkirk.

Gerry Whincop, then a Flying Officer, in PZ449, describes the take-off: “There was some thick fog and for some time the operation was in doubt. I remember taxying out, strict radio silence was being observed and because of the visibility, and the number of aircraft involved, one had to have his finger out! I lined up on the runway and when my turn came, set the gyro and commenced an instrument takeoff as soon as the aircraft in front disappeared.

“I would say the visibility would have been no more than 30 yards and I well remember just getting the wheels up when we hit the slipstream of the aircraft ahead. It shook the tripe out of us! However we broke cloud at about 500ft and the whole squadron set course.”

The formation flew north across the coast near Dunkirk and then set course for the Hook of Holland where the overload tanks were dropped. Continuing parallel and to the north of the Frisian Islands, they crossed the shoreline into Germany midway between Bremerhaven and Cuxhaven. Gerry continues: “The brief was to approach the enemy coast at low level to avoid radar detection and then to climb rapidly to 1,500 to 2,000ft about one minute before land fall. We would then dive at high speed to avoid any coastal flak. However, when we crossed the coast the formation did not go down to the deck but continued at 1,000ft.”

Approaching Bremevorde, about 20 miles inland, they ran into some
very intense and extremely accurate light flak which accounted for two of the formation. Depending on their position and view point in the flight, crews reported one or two aircraft falling.  The first one was HR356, flown by Flt Lt Peter Sage and Fg Off Jack Cockburn which crashed 11/2 miles (2.4km) north of Bevern. This was observed by Don Ivey and ‘Curly’ Waterer, flying HR340, who saw the machine plunge into the ground a distance from the station. The other aircraft, HR177, flown Flt Lt David Potts and Sgt Frank Valentine, who both perished, crashed at Osterwede in the Brillit District of Bremevorde.  Both Derek White, flying HR182, and Des Melbourne in NS999 also saw the demise of the two Mosquitos. Derek recalled: “The squadron was led on this occasion by a Wing Commander with little or no experience of lowlevel daylight ‘ops’ with Mosquitos. We picked up by French prisoners of war who handed him over to the local police. The arresting officer had been captured by New Zealanders during World War One and was quite keen to point out that the tables were now turned.

Jack Dempsey in HR339 also bombed the train. Flying out of the area over a wood a large burst of flak went off directly in front of him under the nose. Shrapnel blew back making the starboard spinner resemble the top of a pepper pot. With coolant pipes fractured, the engine eventually overheated and was feathered out over the sea. The starboard tailplane had a two-foot hole blown through, exposing the construction spars, and shrapnel had also punctured the tail wheel.

Due to the drag from the crippled starboard engine and stripped tailplane, he flew back to base with full left rudder, taking some 21/2 hours. As he landed he was pursued down the runway by an ambulance and fire appliances.

Gerry Whincop, a little piqued at what he had witnessed, flew down the main street of a local township and strafed the area. After the war he was told by Dick Gilbertson that this had not enhanced the mood of the locals there who were holding him prisoner.

George Thorpe, from Gisbourne, flying PZ330, cannoned a large van and during the subsequent debriefing explained he had no idea what this was. The vehicle actually contained bread for a PoW camp at Menlag, near Tarmstadt. The camp inmates had watched the Mosquito, thinking at first it was a Junkers Ju 88, fly low over the site.

Resident in the camp was Sqn Ldr Leonard Trent RNZAF, who had been shot down during 487’s famous and tragic raid with Lockheed Venturas on Amsterdam in May 1943. Leonard recalled that after this bread rations were cut from one sixth to one eighth per day. George Thorpe never lived this down.

After patrolling and attacking transport in their allocated areas, the Mosquitos made their way home alone or in small groups. Some were fired at again by heavy flak from the Frisian Islands, but, flying at zero feet, the guns could inflict no further damage.

Losses were high for 140 Wing with five Mosquitos missing from 487, two from 464 and two from 21 Squadron. The 2nd TAF suffered badly from this operation with a total of 21 Mosquitos missing and another 40 damaged, and all for no real achievement. Subsequent reports and analysis however, highlighted the serious misuse of the Mosquito for this daylight role.

The NCO crews, initially annoyed and frustrated at being left out of this raid, breathed a sigh of relief as the returning personnel described their harrowing flight, questioning the leadership and the losses. Shortly after VE-Day, Dick Gilbertson walked back into the mess hut to an almighty cheer!