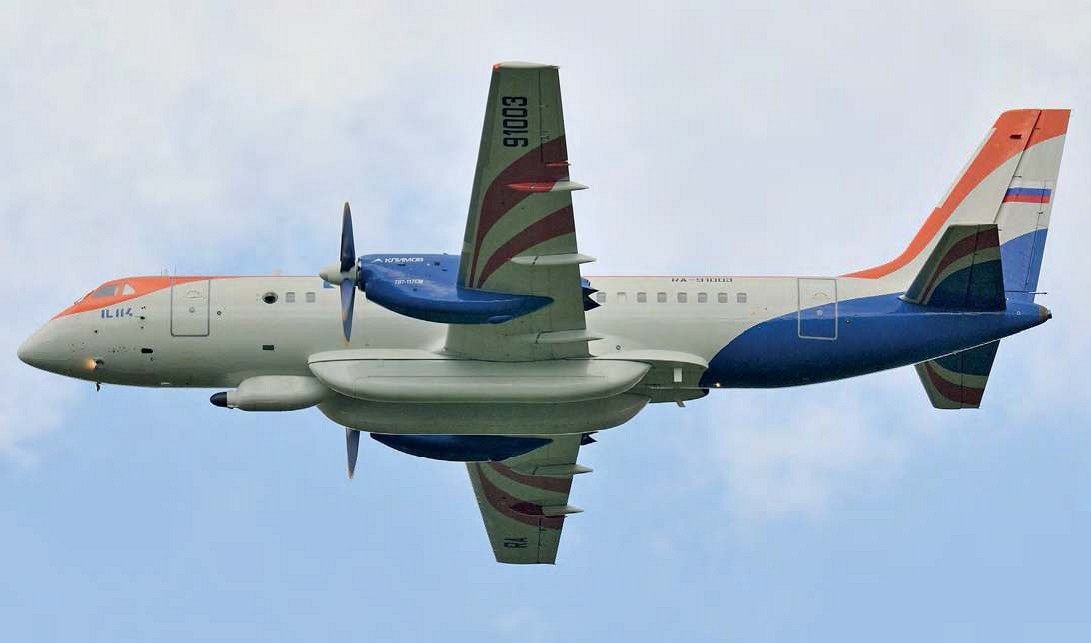 The Il-114LL electronic warfare systems testbed aircraft RA-91003 is the only example of the type currently flying in Russia. Piotr Butowski

Russian newsagency TASS reported on August 28, 2018, that Ilyushin is considering the development of an electronic warfare (EW) version of its Il-114- 300 turboprop airliner.

Ilyushin Aircraft Company Director for Il-114 Programmes Ivan Kabatov told TASS that the variant would leverage the experience the company, together with the Radar-MMS Research and Production Enterprise, has gained from testing electronic warfare systems aboard its Il-114LL flying laboratory over several years.

TASS reported Kabatov as saying the Il-114-300 was an optimal platform for a broad range of tasks, from electronic surveillance to electronic warfare. The news agency also said that Ilyushin’s Marketing Director, Tamara Kakushadze, had discussed special versions of the Il-114-300 with Russian authorities during the recent Army 2018 International Military and Technical Forum, held in Moscow in July.

In other news, the Russian Ministry of Defence announced on August 30, 2018, that it will receive two more upgraded Beriev A-50U Airborne Warning and Control Systems (AWACS) aircraft later this year.

Speaking at the Beriev Taganrog Aviation Scientific Technical Complex on August 30, 2018, Russian Deputy Defence Minister Ruslan Tsalikov said: “Modernisation (of the aircraft) is currently underway. We are going to receive another two aircraft this year (and) in the future, we will continue modernisation of all systems currently in service.”

The A-50U is an upgrade version of the A-50M, itself an upgrade of the original Beriev A-50, codenamed Mainstay by NATO during the Cold War. Both the A-50 and A-50U are eventually intended to be replaced by the Beriev A-100LL, which is based on the Ilyushin Il-76MD-90A (Il-476) and fitted with Vega Radio Engineering Company’s Premier active electronically scanned array (AESA) radar. Deliveries are not expected to occur until at least 2020. Nigel Pittaway