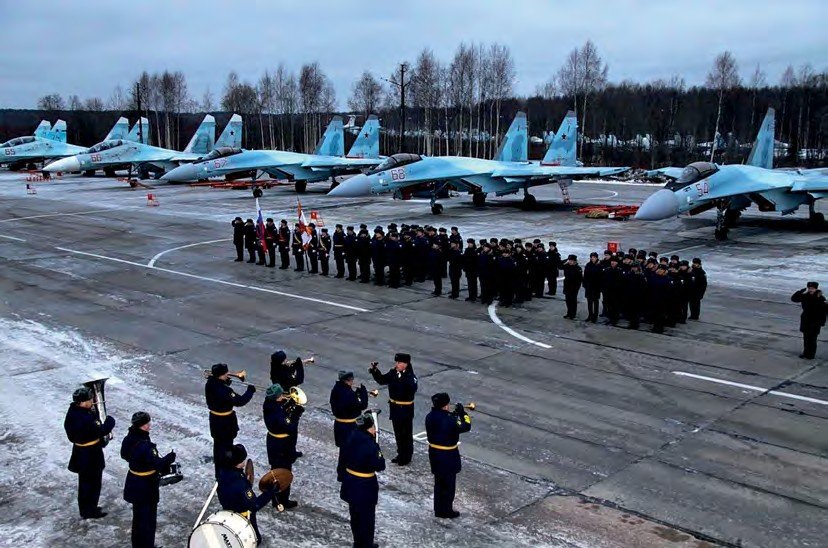 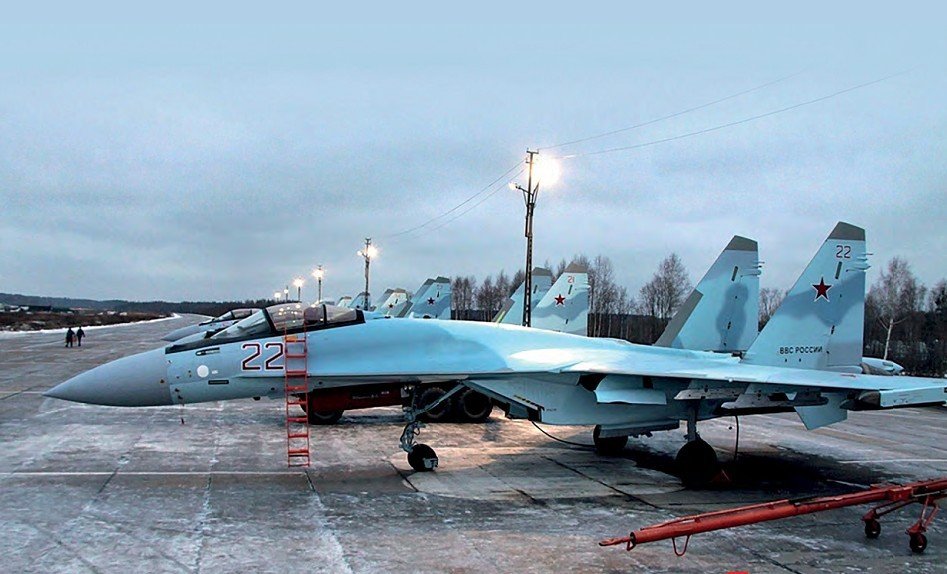 RUSSIA’S TACTICAL aircraft fleet underwent a slower renewal rate over the last year compared to that reported in 2015 and 2016.

The Russian Air and Space Force (RuASF) and the Russian Naval Aviation (RNA) got 39 new combat jets in 2017 (76 in 2015 and 59 in 2016), with the former getting the lion’s share, delivered under contracts dating back to 2011 and 2014. Those contracts are set to be completed by 2020. Then, Russia’s newly approved State Armament Programme 2018– 2025, which came into force on January 1, foresees that deliveries of existing combat jet types will continue into the early 2020s, with new orders expected to be placed for no fewer than 180 more Su- 27 Flanker family aircraft and no fewer than 24 MiG-35s.

The Su-34 Fullback, built at the NAPO plant in Novosibirsk, was the type procured in the largest numbers last year. As many as 16 examples were taken on strength by the RuASF. Ten of these were handed over to the 277th BAP, a bomber regiment stationed at Khurba near Komsomosk-on-Amur in Russia’s far eastern territories, a unit assigned to the 11th Air and Air Defence Army in the Eastern Military District. The regiment has 26 Su-34s equipping its two squadrons. The first Su-34 was received by the regiment in June 2016, replacing the upgraded Su- 24M2.

Then, in November and December 2017, three more pairs were delivered to the 4th GTsPAPVI, a state aviation personnel training and field testing centre at Lipetsk. These Su-34s are, in fact, the initial aircraft set for eventually delivery in February 2018 to the 2nd Guards BAP, a bomber regiment with two Su-24M-equipped squadrons stationed at Chelyabinsk-Shagol, a unit assigned to the 14th Air and Air Defence Army in the Central Military District.

As of December 31, 2017, the number of Su-34s produced at the NAPO plant reached 112, including prototypes and pre-series production machines. An ongoing Su-34 procurement contract dating from February 2011 included 92 aircraft, the first examples being taken on strength in December 2013; 70 are now in RuASF service. Deliveries are expected to be completed in 2019.

The Su-35S is another advanced Flanker derivative and the only single-seat version among the trio of versions currently in production for the RuASF. Produced at the KnAAZ plant in Komsomolskon- Amur, ten Su-35S Flanker Es were delivered during October and December to the 159th Guards IAP, a fighter regiment stationed at Besovets Air Base near Petrozavodsk, a unit assigned tothe 6th Air and Air Defence Army in the Western Military District. In addition to new-build examples, the regiment received two second-hand aircraft built in 2014 and previously operated by the 23rd IAP at Dzemgi Air Base. All 12 aircraft delivered in 2017 joined the first batch of 10 Su-35S Flankers delivered to the regiment in 2016, four of which were ferried to Hmeimim/Latakya Air Base in Syria to take part in the Russian war campaign.

One of three Su-30SMs delivered to the RNA in August 2017, operated by the 72nd Aviation Base based at Chernyakhovsk, Kaliningrad exclave.
Russian MoD via author

The last Su-34 Fullback delivered to the 277th BAP at Khurba Air Base is seen at the return ceremony of four aircraft from combat deployment to Syria on December 20, 2017.
Russian MoD via author

The two-seat Su-30SM is the third Flanker family member built at the IAZ plant in Irkutsk, Siberia. The RuASF received 12 examples in 2017, to equip one squadron of the 14th Guards IAP, a fighter regiment stationed at Kursk-Khalino Air Base, a unit assigned to the 6th Air and Air Defence Army in the Western Military District.

Five Su-30SMs were delivered to the RNA’s 72nd Aviation Base of the Baltic Fleet stationed at Chernyakhovsk Air Base in the Kaliningrad exclave, also part of the Western Military District.

The total number of Su-30SMs ordered for the RuASF comprises 88 aircraft, divided into three contracts. The first two, each covering 30 machines, were signed in 2012, while the third, for 28 aircraft, followed in April 2016. The last examples from the third contract are slated for delivery this year. A new contract is expected to follow, covering between 50 and 60 more Su-30SMs for the RuASF between 2019 and 2022.

The RNA has taken delivery of 20 aircraft, while its firm orders number 28 Su-30SMs. A followon contract for 30 to 40 more aircraft is expected to be placed in the foreseeable future. The type currently equips one 12-aircraft squadron at the 43rd OMShAP, an independent naval attack regiment of the Black Sea Fleet stationed at Saki in Crimea. Two more examples serve with the 279th OKIAP, an independent fighter regiment of the Northern Fleet, stationed at Severomorsk-3 and the six examples delivered in 2016 and 2017 to the 72nd Aviation Base.

NAZ Sokol at Nizhny Novgorod reported delivery of eight upgraded Foxhounds to the 22nd Guards IAP at Tsentralnaya Uglovaya Air Base in the Eastern Military District. These aircraft were included in the 2017 delivery programme, in addition to six more examples earlier in the year, which were originally slated for delivery in 2016.

In total, the regiment’s Foxhound-equipped squadron now has an unusually large fleet of 22 upgraded MiG-31BMs, plus a handful of non-upgraded MiG-31s with a lot of service life remaining. It was hinted in the Russian press that these aircraft will be used to establish a new two-squadron regiment included in the structure of the 11th Air and Air Defence Army in the far eastern territories. The new regiment will most likely be based at Sokolovka Air Base, which in the past hosted a MiG-31- equipped regiment.

In addition, two more upgraded MiG-31BMs were delivered as attrition replacements to the 712th IAP based at Kansk Air Base near Krasnoyarsk, a regiment assigned to the 14th Air and Air Defence Army. The MiG-31 upgrade and service life extension effort is currently being undertaken within the framework of two contracts. The first of these, dated August 2011, was for 60 aircraft delivered by 2019, while the second, signed in November 2014, included 53 more Foxhounds, the last of which is slated for delivery in 2018. The work on the Foxhounds covered by the second contract is split between NAZ Sokol and 514 ARZ, an overhaul plant near the city of Rzhev (which delivered the two upgraded MiG-31BMs to the Kanskbased regiment). More upgraded MiG-31s, originally included in the 2017 production programmes of both plants, are likely to be delivered in early 2018, due to completion delays. To date, the RuASF and RNA have received 90 upgraded MiG-31BMs, operated by seven squadrons.

The little-publicised Su-27 upgrade, known to have been performed under a contract signed in April 2015 and covering 36 aircraft, resulted in the first deliveries last year. According to Russian sources, the first four Flankers under this contract, upgraded to Su-27SM3 standard and life-extended to 40 years at the KnAAZ plant in Komsomolskon- Amur, were ferried to the 3rd SAP, a composite aviation regiment stationed at Krymsk Air Base in the Southern Military District at the end of December.

The long-delayed Su-25SM3 upgrade has at last reported its first deliveries, too. According to an interview with the 4th Air Defence and Air Army commander, Lieutenant General Viktor Sevastyanov, dated August 2017, a total of 16 Su-25SM3s were due to be delivered to two attack regiments by the end of the year. Both the 960th ShAP at Primorsko- Akhtarsk Air Base and the 368th ShAP at Budennovsk Air Base are assigned to the Southern Military District. However, no confirmation from independent sources has been received to date.