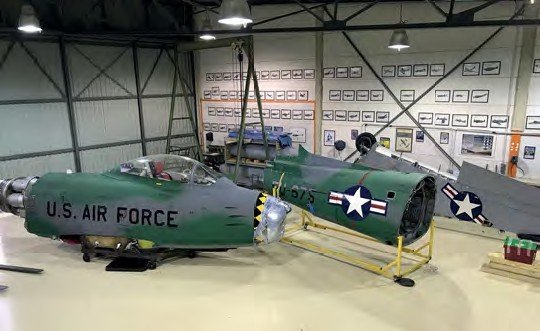 CL-13 Sabre 6 N80FS shortly after unpacking at Avignon-Caumont Airport in the south of France on 18 February. It will be registered F-AYSB before test-flying begins.
FRÉDÉRIC AKARY

Former Luftwaffe Canadair CL-13 Sabre 6 N80FS (c/n 1675) arrived at Avignon- Caumont Airport in the south of France for its new owner, display pilot Frédéric Akary, on 18 February. The 1958 Downsview, Toronto-built machine was previously flown by Dr Rich Sugden of Jackson, Wyoming as N80FS. Akary flew P-51D Mustang F-AZXS Moonbeam McSwine at displays in Europe from 2013-17, before it went back to the USA for the Warbird Heritage Foundation at Waukegan, Illinois during the spring of 2018.

The Sabre was one of 225 of this ultimate variant of the type to be delivered to the Luftwaffe, the two-stage Orenda 14 engine pushing out 7,275lb of static thrust compared to the 6,000lb of the original General Electric J47-GE-13 that powered the North American F-86E model.

The machine made its maiden flight on 11 February 1958 and flew with various codes in German service. Retired in 1970, seven years later it became one of a number of ex-Luftwaffe Sabres acquired by Duxford-based Ormond Haydon-Baillie, but after his death in a Mustang accident in July 1977 it went to Wroughton for storage. In 1979 it was sold to Flight Systems of Mojave, California, for use as a target tug, going back into private ownership in 1997. The Sabre was acquired by Sugden in 2007 prior to a ground-up restoration, since when it is said to have only flown for 50 hours.

Akary will soon begin flight-testing the machine, having qualified on the type in the USA last summer. It will be the only Sabre flying in Europe, and among its bookings for the forthcoming season is the Paris Villaroche Air Legend show at Melun on 7-8 September. This year, the event will feature several classic jets, including a Lockheed T-33, Saab J 29, Hawker Hunter, de Havilland Vampires and MiG-15, as well as Mustangs, Spitfires, Sea Furies, Skyraiders, a Bearcat, the Patrouille de France and a Rafale solo display.