Campaigners from the aviation group ‘Save Coventry Airport’ are holding an open day and fly-in on January 8  for the general public to attend to raise awareness about the airfield, which may be closed to make space for a factory

The Save Coventry Airport action group has organised an open day and fly-in at the airport for this coming Saturday 8 January, ahead of a council meeting on 11 January 2022 which will decide the future of the airfield. At the moment it is confirmed that the free-entry event will feature a static display of the world’s last airworthy ex-RAF iconic Vampire jet (featured in the February issue of FlyPast magazine) and a special offer from Flight Simulators Midland to fly their 747 simulator, in addition to a number of aircraft which are expected to attend to show support for the airport. Additionally, tours of the Nimrod and Shackleton aircraft on static display will also be available. Hot food and drinks can be purchased from the ‘Light Apron’ cafe and Coventry Aero Club, the site’s oldest tenants, will be welcoming guests with a free buffet.

The council meeting on 11 January will discuss the planning application submitted by The Rigby Group, which wants to build on the airfield a gigafactory for the production of electric batteries, a plan that would imply the end of aviation activities.

Several public bodies have objected to the gigafactory plan, including Baginton Parish Council, which says that it ‘would breach [the General Aviation and National Policy] guidelines and destroy a nationally important piece of infrastructure’. The UK Civil Aviation Authority has also expressed strong opposition to the planning application, saying that ‘it would undermine the Department for Transport’s objectives of promoting and boosting the viability of UK General aviation’.

Campaigners argue the airport is still very-much needed and should not be bulldozed to make way for the gigafactory. They claim there are plenty of other suitable sites to build a centre to create batteries.

Saturday’s event will be a public show of support for the airfield, its enterprise, its community and the campaign to save it.

Organiser and founding member of the Save Coventry Airport group, Joshua Mason-Allen, has said: 'This event is for all of the businesses at the airfield to show how vital it is as a public resource, and a chance for any member of the public to come along and see what goes on at Coventry. We hope for media coverage and potentially members of the council to be witness to what happens on Saturday'.

Aircraft visiting for the 8 January event are required to register at www.egbe-flights.com. The fly-in and open day, which may include additional events (yet to be confirmed), will start at 10AM. 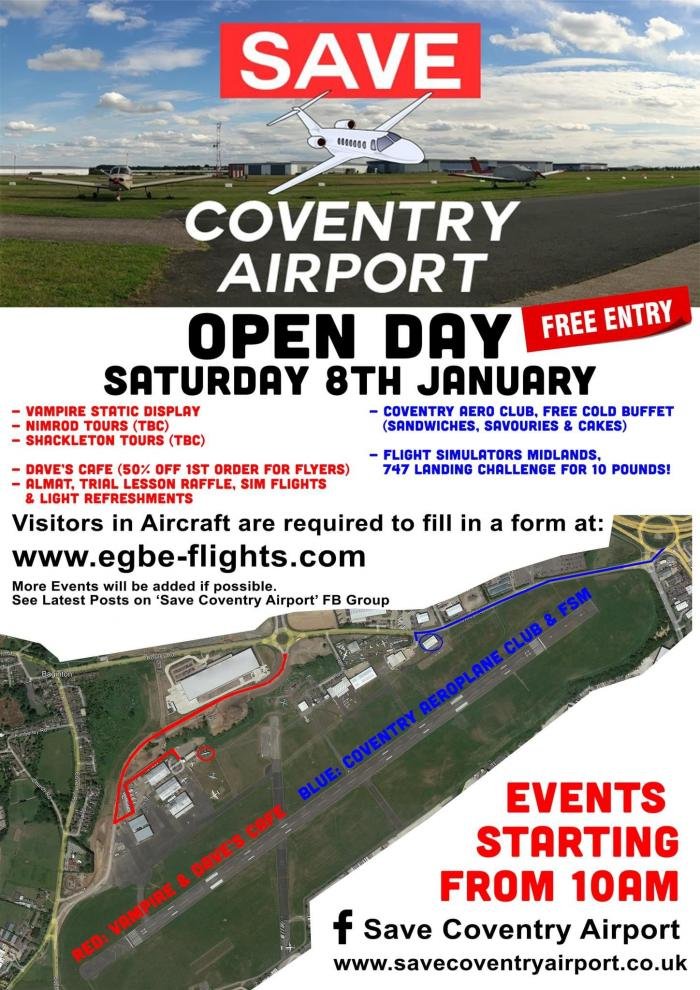