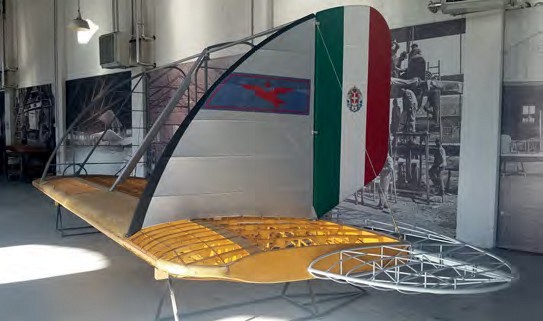 The tail section of the SM55X reproduction under construction with the Savoia-Marchetti Heritage Group. 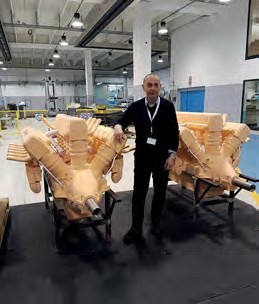 Italian enthusiasts and museums have long lamented the lack of a Savoia-Marchetti SM55, the twin-tail, double-hull, push-pull seaplane as used by Italo Balbo for the historymaking massed flights to Brazil and the United States in 1930-33. Italy last saw a complete SM55X more than 75 years ago, but that is about to change.

Two separate projects are under way in Italy to re-create full-size SM55s: the first and most advanced is the static SM55X reproduction being built by the Savoia-Marchetti Heritage Group (SMHG), based at Somma Lombardo, Varese, very close to Milan- Malpensa airport. A number of items have already been completed and are on display at the Volandia museum near the airport.

Formed by retired SIAI Marchetti staff, SMHG is working to the original factory drawings, which often need to be restored themselves before being copied for workshop use. In some cases, missing drawings have been re-created from photographs and reference to adjoining parts.

The team decided to concentrate initially on high-impact, stand-alone items such as the triple-finned empennage and overhead engine unit. In both cases, they were able to enlist the help of the extensive aircraft manufacturing supply chain in the Varese province, the industrial heartland of Italian aviation. The OVS welding company, based at Sesto Calende, built the steel-tube elevator, and six miles to the south, in the town of Varallo Pombia, Plyform Composites machined two replica Isotta Fraschini Asso 750 engines from high-density Ureol foam.

The propellers and spinners are all-metal units. The SMHG team has finished making the wooden booms that support the empennage, and work has recently started on the right float, a complex all-wood structure that is 32.5ft (9.93m) long and 6.3ft (1.92m) wide. It is intended to leave this partially uncovered to showcase its boat-like design. So far, two volunteers have hand-made 11 out of the 37 frames.

The seaplane will be marked to represent I-BALB, in which Italian air minister Italo Balbo led the 24-ship squadron that in July-August 1933 flew a round trip from Rome across the North Atlantic to Lake Michigan for the Century of Progress International Exposition at the Chicago World’s Fair.

This SM55, which will be powered by modern engines, will have a completely redesigned structure to meet modern airworthiness standards and to allow construction with current computer-controlled equipment. Design work, now largely complete, has been supported by the Turin Polytechnic. The project is in the fundraising phase.

Although a complete SM55X was preserved at the Orbetello flying school in Tuscany, it was lost following the September 1943 armistice, leaving the all-red SM55 Jahu in Brazil as the world’s only survivor of the approximately 260 examples built between 1924 and 1933. Jahu is preserved in the TAM/Wings of a Dream Museum in São Carlos, which closed to the public in January 2016. The machine, I-BAUQ, was the SM55 used by Brazilian pilot Cdr João Ribeiro de Barros in his crossing of the South Atlantic in 1927.

EA-6B TO PROWL NO MORE 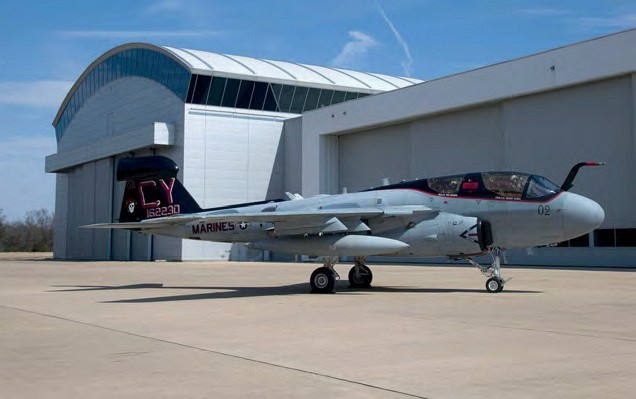 Shortly after making the last ever EA-6B Prowler landing, BuNo 162230 sits on the ramp outside the National Air and Space Museum’s Steven F. Udvar-Hazy Center at Dulles on 14 March.

Following the type’s retirement by US Marine Corps squadron VMAQ-2 ‘Death Jesters’, Grumman EA-6B Prowler BuNo 162230 arrived at the National Air and Space Museum’s Steven F. Udvar-Hazy Center at Dulles Airport, Virginia on 14 March, after completing the final flight of this electronic warfare jet from MCAS Cherry Point, North Carolina. Another Prowler, BuNo 162228, had been delivered to the Frontiers of Flight Museum in Dallas, Texas, two days earlier. VMAQ-2 was formally deactivated on 8 March, having operated the EA-6B for 42 years.

The prototype EA-6B made its maiden flight back in May 1968, and the Prowler entered US Navy service in September 1970. Two squadrons operated the type during the Vietnam war, and it subsequently saw use over Afghanistan, Iraq and Syria. For more, see the May issue of our sister magazine Combat Aircraft.