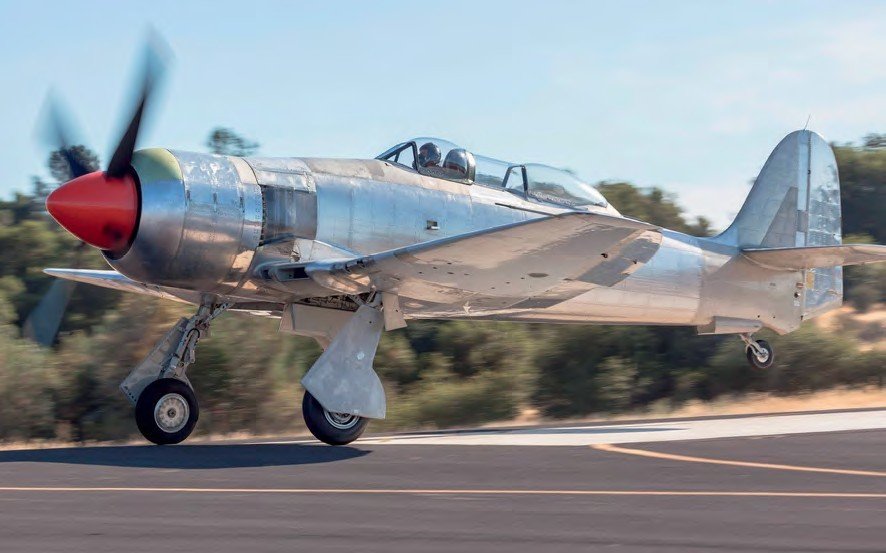 In gleaming natural metal, Sea Fury T20 WE820/ N85SF gets airborne at Auburn Municipal Airport on 1 July with Ken Dwelle at the helm.
MARK LOPER

NEARLY 14 years after it last achieved glory as the most radically modified of all the Hawker Sea Fury racers in the National Championship Air Races in Reno, Nevada, Sea Fury T20 WE820/N85SF made its first post-restoration flight at Auburn Municipal Airport, northern California on 1 July with Ken Dwelle at the controls. The ex-Fleet Air Arm machine has been rebuilt back into its original military two-seater configuration, and will now be painted in the markings it wore while serving with 738 Squadron at Lossiemouth in the mid-1950s.

The fighter-trainer now bears no trace of its recent past, which began during 1984-85 when WE820 was transformed into a single-seat racer named Blind Man’s Bluff for New Jersey resident Eric Lorentzen. Modifications included the installation of a small, low-drag canopy over a new cockpit located in the rear fuselage, reduction of the wingspan by 4ft to 34ft, the fitting of a squared-off tailplane 14in taller than the original, installation of a 3,250hp Wright R-3350 engine turning a Douglas Skyraider propeller, and the fitting of Douglas A-26 cowlings. The engine was adapted to run on methanol. After many travails and blown powerplants, Blind Man’s Bluff was flown by Skip Holm into second place in the Unlimited Silver race at Reno in 1987. Now named Critical Mass and owned by combat veteran Skyraider pilot Tom A. Dwelle of Auburn, N85SF achieved greater success in September 1994, placing fifth in the Unlimited Gold race, again with Holm at the helm. Dwelle himself took the second step on the podium after the Unlimited Gold race at Reno in 2000, being beaten into second place by Holm flying P-51D Dago Red. The last appearance at Reno for N85SF was in 2003, when Dwelle placed third at a speed of 446.965mph, after which he retired from air racing.

“The fighter-trainer now bears no trace of its recent past, which began during 1984-85 when WE820 became a single-seat racer named Blind Man’s Bluff with a low-drag canopy, reduced wing span and a squared-off tailplane”

Rebuilding of the fuselage back to stock configuration and work on the centre section and outer wings was carried out by Sea Fury specialists Sanders Aeronautics at Ione, California. WE820 was completed by a team from Nella Oil, the Dwelle family business at Auburn.

The machine was originally built as the first of the third production batch of seven Sea Fury T20s, and delivered to RNAS Anthorn near Morecambe, Cumbria in November 1950. It was allotted to 738 Squadron at Culdrose in March 1952, going with the unit to Lossiemouth in November 1953. Struck off charge in December 1956, WE820 was bought back by Hawker in May 1958 and converted to target-towing configuration before being registered D-COTE and becoming one of 17 examples of the T20 to be operated by Deutsche Luftfahrt- Beratungsdienst (DLB), providing target-towing facilities for the German forces based out of Lübeck and Cologne-Bonn (Wahn). The last of the bright red DLB Sea Furies were retired in 1970. After a period in open storage at Wahn D-COTE was sold to John Stokes, the founder of the Central Texas Wing of the Confederate Air Force, and moved to his ranch at San Marcos, Texas, during 1980.