Westland Sea King HAR3 XZ593made the 35-mile trip from RAF Mount Pleasant to Port Stanley Airport in the Falkland Islands under an RAF Chinook on 14 January, before being handed over to the Falkland Islands Museum and National Trust by the Ministry of Defence. The helicopter was retired at Mount Pleasant on 31March 2016, bringing to a close a 38-year flying career during which XZ593 clocked up in excess of 17,400 flying hours. It was operated across the United Kingdom and was routinely deployed to the Falklands, where Sea Kings had provided military search and rescue cover since 1983.

XZ593 had originally arrived at Wideawake airfield in May 1982 during the Falklands conflict. Shortly before retirement, it flew the last RAF Sea King rescue mission, picking up a Spanish fisherman with severe abdominal pains from the fishing vessel Pescador 145nm north-west of the Falklands. 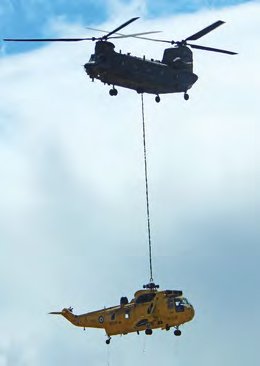