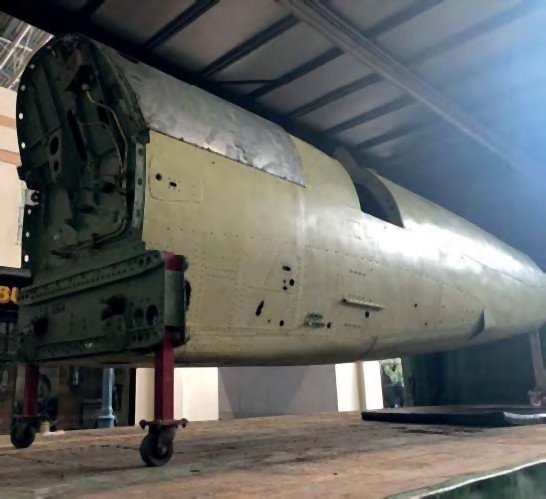 The rebuilt fuselage of Seafire F46 LA564/G-FRSX at the Milestones Museum in Basingstoke during October. MILESTONES MUSEUM 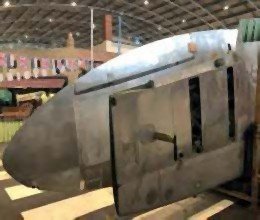 The wings of Seafire XV SR462/ G-TGVP shortly before their move back to Old Warden. MILESTONES MUSEUM

The fuselage of Supermarine Seafire F46 LA564/G-FRSX was on temporary display at the Milestones Museum in Basingstoke during the late summer and early autumn, along with the wings from Seafire XV SR462/ G-TGVP.

At the end of October the two fighters were returned to Old Warden, Bedfordshire, where they are under restoration to flying condition in the Kennet Aviation workshop. The Seafire 46 will be powered by the correct Rolls-Royce Griffon 85, turning a genuine, counter-rotating Rotol propeller, unlike the airworthy Seafire F47, VP441, based at Fortine, Montana with James E. Smith, which has a Griffon 57 from an Avro Shackleton (see Aeroplane October 2004).

This Seafire made its maiden flight on 14 March 1946, and was subsequently flown by four great Supermarine test pilots: Jeffrey Quill, Dave Morgan, Mike Lithgow and Les Colquhoun. Struck off charge in June 1951, the fuselage was recovered from a scrapyard in Carlisle during 1966 and acquired by Spitfire historian Peter Arnold in 1973.

Following several years under rebuild in Arnold’s garage at Redbourne, and later Newport Pagnell, it was sold on in 2002, and is currently registered to Seafire Displays Ltd. The wings from Spitfire F22 PK664 are being used as a template to reverse-engineer a set of mainplanes for the F46, a variant fitted with the same, non-folding wings as were seen on the F22.

The Seafire XV is owned by Tim Percy, the registration G-TGVP being a tribute to his late father, Capt Terence Gerard Vaughn Percy DSC, who commanded 848 Squadron flying Grumman Avengers from HMS Formidable in the Pacific during 1944. He also piloted SR462 in the immediate post-war period. Percy was CO at RNAS Yeovilton during 1964, the year the Fleet Air Arm Museum was opened.

The Westland-built Seafire XV went on to serve with the Burmese Air Force, and was recovered from Mingaladon, Rangoon during 1998.