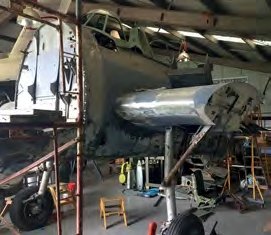 At the Classic Flyers Aviation Museum at Tauranga Airport in the Bay of Plenty region of the North Island of New Zealand, 15 volunteers are stuck into their second Grumman Avenger restoration in less than four years. The derelict former Royal New Zealand Air Force TBF-1, NZ2539, arrived on 7 July 2017 from Riverhead, just north of Auckland, where it had been kept by owner Ken Jacobs since he acquired it in the mid-1970s from a children’s playground in Havelock North.

Ken donated it to the museum after seeing its previous TBF-1 restoration, NZ2505, on which the Classic Flyers engineers began a two-year rebuild to ground-running condition in August 2014 on behalf of its owners, the Gisborne Aviation Preservation Society. That machine is on loan to Classic Flyers for five years and is providing an important reference point during the restoration of ’2539. Gisborne airfield was where No 30 Squadron, RNZAF trained on Avengers during 1943 prior to heading to the Pacific theatre, so NZ2505 will be in an appropriate home when it finally goes on display.