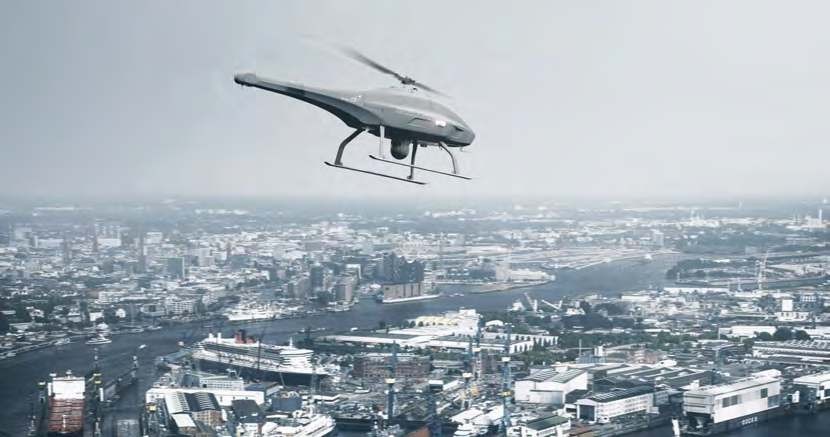 Manufacturer UMS Skeldar, the UAV joint venture between Saab and UMS AERO of Switzerland, has launched a new variant of its Skeldar V-200 midsize rotary-wing system. The Skeldar V-200B is targeted at maritime applications and features enhanced features from the first-generation V-200A, including extended endurance and an improved engine management system and payload capabilities. The upgraded system completed trials earlier this year following what UMS Skeldar describes as an “intensive modiication audit, based on intheatre performance feedback”.

UMS Skeldar Head of Business Development David Willems said: “It is no secret that more players are attempting to enter the maritime market for rotary UAVs. Recent navy contracts have stipulated the role and speciication, and this has conirmed our strategy of development is absolutely the right move at the right time.”

The Skeldar V-200B will ofer more than ive hours’ endurance and the airframe will be approximately 10kg (22lb) flighter than the V-200A. In an interview with AIR International, Willems explained: “We have achieved that by using some new flighter components [and] reorganising the cabling design for avionics components.”

The V-200 is powered by a twostroke heavy-fuel engine manufactured by the German engine manufacturer Hirth, which was acquired by UMS Skeldar last year. Willems said: “Our engine coniguration provides signiicantly unmatched time between overhauls, all of which are vital to maritime operations by military and civilian customers.”

The V-200 is the ffirst medium maritime UAV with a heavyfuel engine using Jet A-1, JP-5 and JP-8 fuels. The Orbital Corporation in Australia licensed its heavy-fuel technology to UMS Skeldar for the system.

The V-200B has upgraded software and customers will be able to carry two or three payloads. Willems stressed to AIR International the V-200B has been developed to meet a demand for lexibility: “A force wants missions to be performed with diferent types of sensors. Because you can never have as many assets as you have sensors, you are trying to multiply the number of sensors you have on the platform.”

Willems said a new sensor on the V-200B is the Sentient Vision Systems VIDAR (Visual Detection and Ranging), a persistent wide area maritime search system that autonomously detects objects on the ocean surface. He said: “We are busy with the integration of the VIDAR; we’ll have the first ive-camera ViDAR ever on a platform. We are also in the early stages of integrating a synthetic aperture radar.”

VIDAR is a passive system using optical cameras connected to software that features a video-processing capability to analyse changes on the surface of water. Willems said: “It works better than synthetic aperture radar in heavy sea states because it is real time.” Mark Broadbent