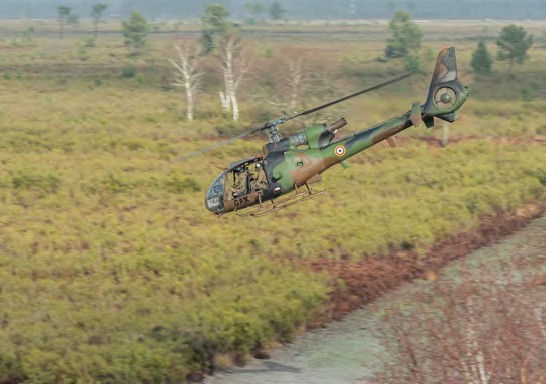 The Aviation Légère de l’Armée de Terre has about 100 Gazelle helicopters in service. Despite 32 years of service, the Gazelle continues to fly armed patrol and reconnaissance missions, often working together with the Tigre crews.

Caracals will receive new armament systems in the upcoming months.
All images by Jan Kraak unless noted

François Cornut-Gentille, a member of the French National Assembly with a background in military issues and former mayor of Saint-Dizier (home of the Armée de l’Air’s 4th Fighter Wing) had requested information concerning the serviceability of the different types of helicopters operated by the French Armed Forces. Even though his request was put in on January 9, the off cial reply from the Ministry of Defence was only published on July 3. Cornut- Gentille had requested information regarding the serviceability on December 31, 2016, and December 31, 2017, to help determine if recent investments in the serviceability of aircraft has paid off. The table below provides an overview of the information provided by the MoD. According to French standards, an aircraft is serviceable if it can carry out its task within six hours.

The information provided seems to indicate there was not a significant increase in serviceability between 2016 and 2017. Some helicopter types had a small increase in serviceability, whereas others saw a decrease. Furthermore, there seem to be a few outlying examples. Low serviceability of the Tigre HAP was previously reported, as many of the helicopters are in different stages of maintenance and modernisation. The updated and more recent Tigre HAD fleet shows increased serviceability, which would indicate that once the HAP variants are upgraded to HAD standard they should be able to fly more. Lowest serviceability was the Aéronavale’s Lynx with a rate of only 18%. However, it is not the only Navy helicopter that is encountering serviceability issues. The NH90 NFH is replacing the Lynx as the nextgeneration shipborne helicopter, but the new fleet was only serviceable roughly one out of three times. 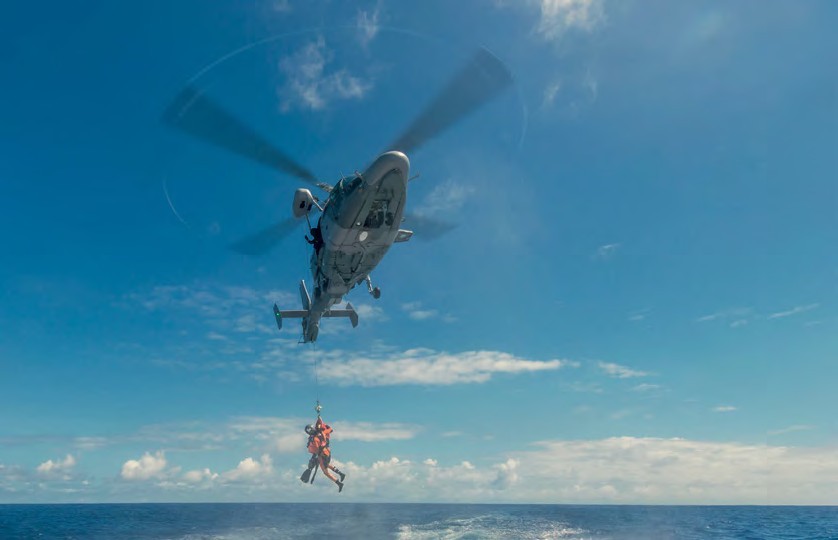 Maintenance costs for the Aéronavale Panther fleet are approximately 2.6 times less expensive than the NH90.

Cornut-Gentille also requested the maintenance costs for each type of helicopter over FY2017. Although the Ministry of Defence only provided total maintenance costs for the different fleets, this information gives some interesting insights. We have presented the MoD’s data in the table below and added a column listing the maintenance cost per aircraft, where we divided the total cost as indicated by the Ministry and divided it by the number of aircraft that were reported on strength. Although this is not an official statistic, it does provide an approximate index to compare between the different helicopters. 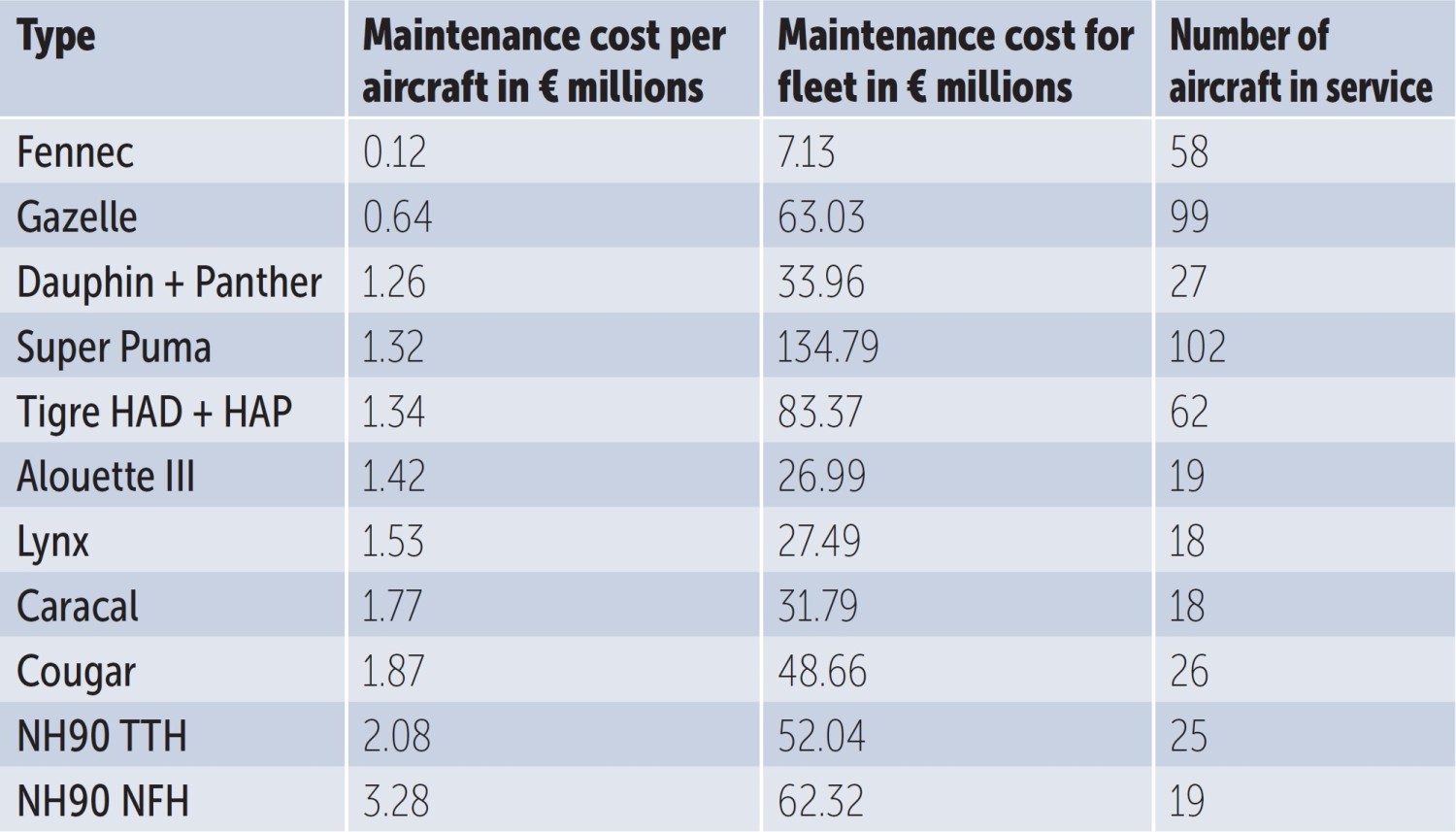 As the table shows, the Fennec and Gazelle helicopters are the least expensive in terms of maintenance cost per aircraft. Even after 40 years of service life, the Super Puma is less expensive to maintain than the Caracal, Cougar and NH90. The ALAT Cougar fleet is almost entirely upgraded, which might see the maintenance cost drop in 2019. The helicopter that stands out from the other types is the NH90, especially the Aéronavale’s NH90 NFH, which is eating up a large proportion of the maintenance budget. When compared to the Panther and Dauphin, the NH90 is 2.6 times more expensive. Given the NH90 is a reasonably new platform, there is undoubtedly a large proportion of maintenance used for updates and improvements, but it would seem problems such as corrosion issues that have been reported in the past few years are proving very costly for the Aéronavale.

On June 6, an Armée de l’Air A400M airlifted an ALAT Tigre attack helicopter to Mali for the first time.

The aircraft flew directly from BA123 Orléans to Gao in Mali. The use of the A400M has several advantages. First, it means Opération Barkhane forces are less dependent on the use of the Antonov An-124. Recently, there have been growing worries regarding the availability of An-124 aircraft amongst increasing tensions between Russia and NATO. Furthermore, the A400M provides flexibility in terms of destinations. If the Armée de l’Air is asked to fly in a helicopter to Madama, a forward operating base in the north of Niger that does not have a hardened runway, the A400M can get there, but an An-124 will have to fly to a larger airport with concrete runways and enough space to manoeuvre. Another first for the French A400M was achieved on June 8 when the Direction Générale de l’Armement (Director General of Armament) announced the aircraft is now certified to air refuel the Rafale fighter. The A400M can air refuel other aircraft by either using two baskets or a hose drum unit. After certification, the A400M will now be operationally tested by the Armée de l’Air’s Centre d’Expertise Aérienne Militaire (Military Aviation Expertise Centre) and the Aéronavale’s Centre d’Expérimentations Pratiques et de Réception de l’Aéronautique Navale (Operational Experimentation and Acceptance Centre for Naval Aeronautics) to perform tests under operational circumstances, and to write the manuals for the A400M and Rafale crews. Once the units have finished their work, the operational units can start aerial refuelling with the A400M.

French customs, the Direction Générale des Douanes et Droits Indirects, operates a fleet of 14 fixed-wing aircraft, comprising seven Beechcraft 350s, five Cessna F406s, two Cessna T206s, and four AS355s and five EC135s helicopters. The annual maintenance budget for these aircraft was approximately €6.37 million in 2017. Last year, the fixed-wing aircraft clocked 3,810 flying hours, whereas the helicopters accumulated 1,990 hours. Interestingly, information provided by the service indicates only three out of the seven Beech 350s were operational in 2017. The customs fleet will be significantly reduced this year, as more of the Beech 350s should become operational. The average age of the Cessna F406 fleet is 27 years, compared to only five years for the Beech 350. As the availability of the newer Beech will represent an increase in potential flying hours for the customs aerial wing, two Cessna F406s and the two Cessna T206s will be retired, as will one of the AS355s. 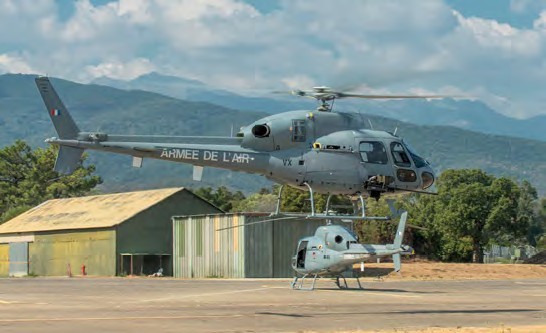 The versatile AS555 Fennec, shown fitted with a 20mm cannon for close air support, has been used in many different roles throughout the years.