So famous has the Battle of Britain film score become, its troubled origins tend to be forgotten 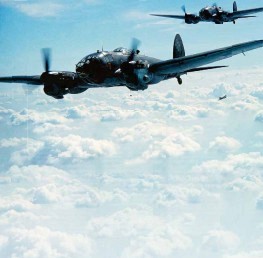 A classic Battle of Britain scene, with a lone Spitfire about to launch an attack on a pair of CASA 2.111s. The score that accompanied such sequences turned into a significant bone of contention.
UNITED ARTISTS/KOBAL/ SHUTTERSTOCK

Benjamin Fisz escaped from his native Poland as the Nazis advanced and made his way to Britain. When he was old enough he joined the RAF and learned to _ y. Fisz flew Spit_ re IXs, P-51 Mustangs and, post-war, Meteors before he was demobbed. Having gone into the British _ lm industry, by the early 1960s Fisz had produced several successful movies and was looking for another challenge. One of these was to be a film about Orde Wingate. A script was commissioned and research began. In 1980 he recalled to this writer, “I found Wingate a most interesting and complex person and I knew we could make a very interesting _ lm about him. All the elements for a good story were there and Wingate’s personal leadership made him stand out from the other wartime commanders and leaders. We talked with his family and they were enthusiastic about the prospect, so we went ahead and started to gather material on Wingate for the _ lm.