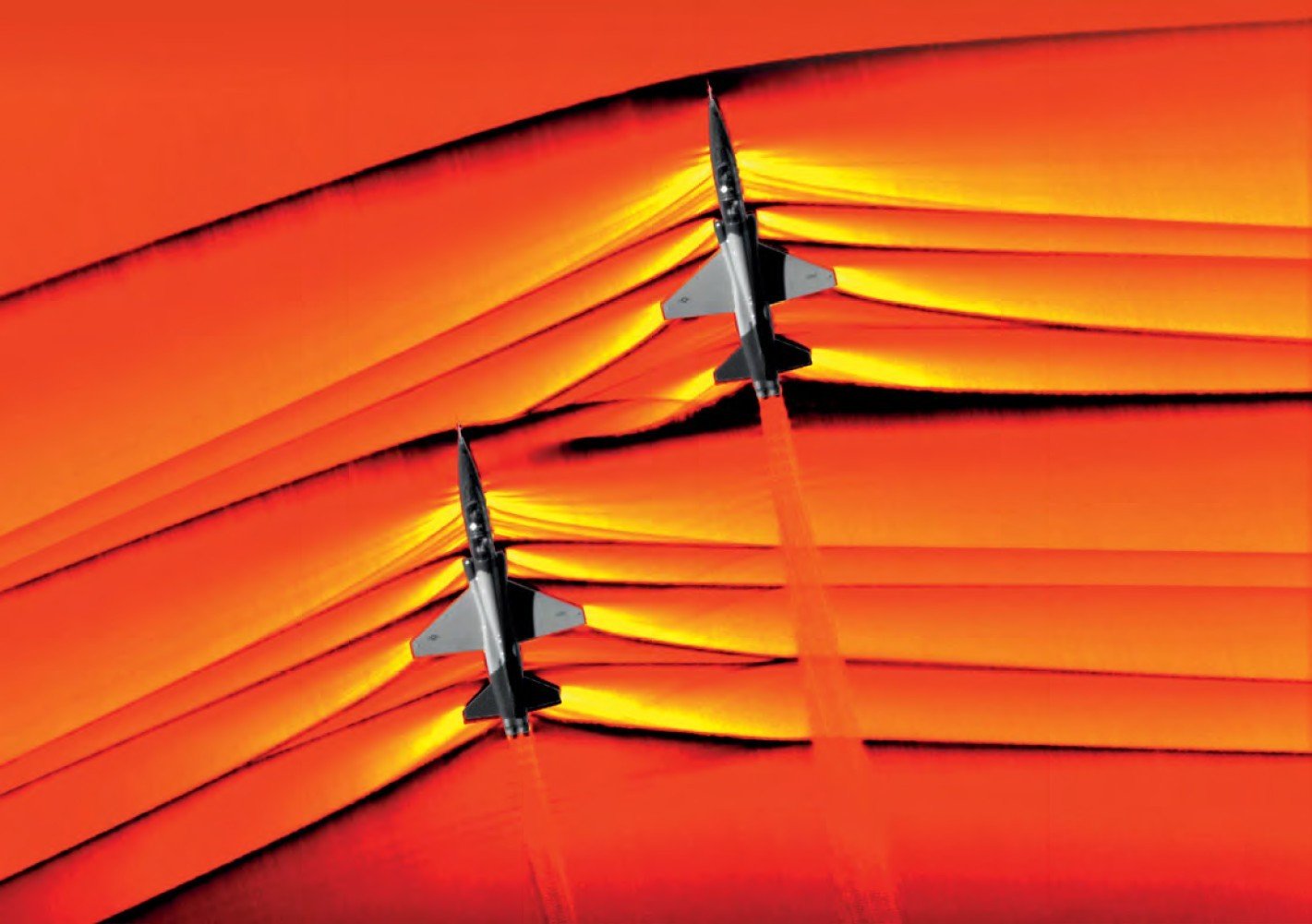 THE IMAGE you see on this page is one of the first ever pictures of the interaction between shockwaves from two supersonic aircraft in flight.

It was captured by NASA’s Armstrong Flight Research Center during the fourth phase of the agency’s Air-to-Air Background Oriented Schlieren (AirBOS) flights from Edwards Air Force Base, California.

The flights were testing out advanced camera equipment capable of capturing high-quality images of the rapid pressure changes produced when an aircraft flies at supersonic speeds.

The equipment will be used in the forthcoming Low-Boom Flight Demonstration, which will use the X-59 QuESST (Quiet Supersonic Transport) demonstrator currently under development to gather data about the nature of supersonic booms and inform future decision-making about the regulations governing overland commercial supersonic flight.

The images from the AirBOS flights, released by NASA in March, show a pair of T-38s from the US Air Force Test Pilot School at Edwards Air Force Base flying in formation approximately 30ft (9m) away from each other, with the trailing aircraft flying about 10ft (3m) lower than the leading jet. A NASA statement said: “With exceptional clarity, the flow of the shockwaves from both aircraft is seen, and for the first time the interaction of the shocks can be seen in flight.”

Neal Smith, a research engineer with AerospaceComputing Inc at NASA Ames’ fluid mechanics laboratory, said: “What’s interesting is, if you look at the rear T-38, you see these shocks kind of interact in a curve. This is because the trailing T-38 is flying in the wake of the leading aircraft, so the shocks are going to be shaped differently. This data is really going to help us advance our understanding of how these shocks interact.”

Sonic booms are heard as a result of the shockwaves emanating from components such as the nose, wings, engine and tail that are created as an aircraft travels at supersonic speed. Schlieren photography, which has its origins in the 19th century, is an imaging technique used by NASA for decades in laboratory wind tunnels and, more recently, in flying trials to visualise shockwaves.

The AirBOS phase four flights featured an upgraded version of the airborne Schlieren photography systems previously used, with NASA saying its researchers were able to capture three times the amount of data in the same amount of time.

Dan Banks, senior research engineer at NASA Armstrong, said: “We’re seeing a level of physical detail here that I don’t think anybody has ever seen before.

“Just looking at the data for the first time, I think things worked out better than we’d imagined. This is a very big step.”

The AirBOS system was carried on board NASA’s Beech 200 King Air, which flew in a pattern at around 30,000ft while the T-38s passed at supersonic speeds approximately 2,000ft beneath it, the cameras recording at the exact moment the jets came into the advanced camera’s frame.

The AirBOS system has several important differences from previous Schlieren imaging systems used by NASA. It has a wider field of view, a higher memory capacity (enabling researchers to increase the frame rate to 1,400 frames per second, making it easier to capture a larger number of samples) and an upgraded connection to data storage computers allowing for a much higher data download rate.

The result is more data can be collected, boosting the quality of the images and in turn giving researchers a better understanding about the behaviour of the shockwaves. NASA said the data from the AirBOS flights will continue to undergo analysis, helping it to refine the data-collection techniques and further improve quality of the data.

By understanding in detail how shockwaves behave, more information can be used to develop the X-59 and, in turn, work towards the target of achieving quiet overland supersonic flight.