A SHOW OF FORCE

The Dubai Air Show, which ran from November 12-16, drew a strong contingent of US military aircraft deployed to the region. It enabled both a showcase of American hardware and a useful chance to catch up on recent operations. 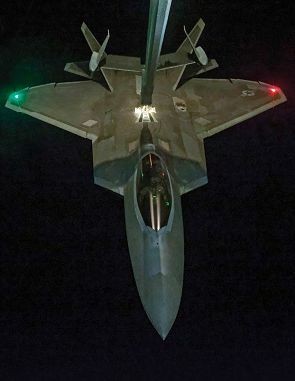 An F-22A of the 95th FS takes on fuel from a KC-10A Extender from the 908th Expeditionary Air Refueling Squadron during the November 19 mission to Afghanistan.
USAF/TSgt Gregory Brook

THIS YEAR’S DUBAI Air Show in November was once again an opportunity for the US military to showcase some of its assets that are deployed to the Central Command (CENTCOM) region. It drew several participants from the ongoing Operation ‘Inherent Resolve’ including a pair of F-15E Strike Eagles, two F-16CM Fighting Falcons, two F-22A Raptors, an E-3B AWACS, a MH-60S Knighthawk, a CH-53E Super Stallion, an MV-22B Osprey and a KC- 130J Hercules. An AV-8B Harrier II was also due to attend but was pulled due to operational commitments.