Mark Broadbent reports on a significant milestone for Virgin Orbit 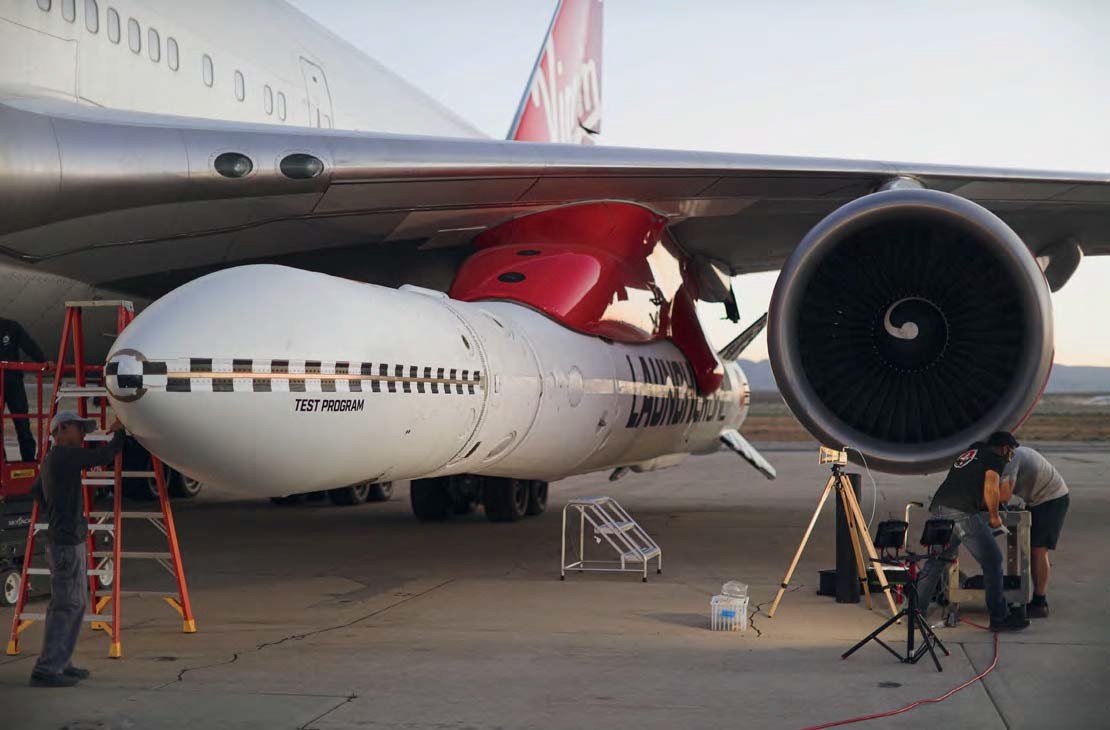 The 70ft-long LauncherOne rocket is carried on the spare engine pylon on the 747-400’s port wing.

AT 35,000ft (10,668m) in airspace near Edwards Air Force Base, California, the Boeing 747 released a rocket from its port wing, the 70ft-long (21m) vehicle falling away under the Jumbo to the Mojave Desert.

The unusual sight of such a large aeroplane dropping this cargo marked a significant step forward for Virgin Orbit’s plan to put into use a highaltitude launch system for small satellites.

Virgin Orbit is off ering a novel way to put small satellites into space. The company’s launch concept involves the 747-400 carrier aircraft N744VG (c/n 32745), named Cosmic Girl, releasing a two-stage expendable rocket called LauncherOne from high altitude, which will then climb into low-Earth orbit to launch its satellite payloads. Virgin Orbit has passed a series of test milestones over the last 18 months including the integration of LauncherOne onto the Jumbo – the rocket is carried on a specially-designed pylon on the left wing – and then captive carriage test flights where the rocket was transported on the 747 from takeoff to landing.

The drop test involved a fully loaded, although inert, LauncherOne. The primary purpose was to monitor the critical seconds after release to ensure LauncherOne separates cleanly from the 747 and to observe how the rocket freefalls through the air. Virgin Orbit’s Chief Test Pilot Kelly Latimer, a retired US Air Force Lieutenant Colonel, said: “The whole flight went incredibly well. The release was extremely smooth, and the rocket fell away nicely.” She reported “a small roll with the aircraft” as LauncherOne was released, but she added: “Everything matched what we’d seen in the simulators well – in fact, the release dynamics and the aircraft handling qualities were both better than we expected.” The test was described by Virgin Orbit as the beginning of the transition to orbital test flight launches. The company has built and assembled the first LauncherOne rocket that will be used for these test flights. The rocket was due to have been handed over to the company’s operations team for checks leading up to its launch, which is planned for later this year. Virgin Orbit has also tested LauncherOne on the ground to prove the rocket’s engines, tanks, pumps, software and all other systems can function together as integrated stages, culminating in full-thrust integrated ‘hot-fires’ of its main and upper stages.

The traditional launch method for satellites is of course from vertical launch ranges. In off ering a horizontal launch capability based around the 747/ LauncherOne combo, Virgin Orbit intends to provide a quicker and lower-cost launch system for commercial organisations and research institutions. The company says a key advantage is because the 747 can go anywhere around the world and operate from any latitude, it has inherent flexibility and can therefore give access to orbits that would otherwise be difficult to reach, meaning satellites can be placed in their intended orbit more efficiently and weather-related cancellations minimised.

Mojave Air and Space Port will host the first orbital launch as well as subsequent launches to high inclination orbits, but Virgin Orbit has agreements with several sites, including Launch and Landing Facility at the Kennedy Space Center in Florida, Guam, Spaceport Cornwall in the UK and Taranto- Grottaglie Airport in Italy, to be future launch locations.

Although Virgin Orbit’s launch system was designed primarily to serve commercial needs, unsurprisingly a platform designed to quickly and easily deploy satellites into orbit has caught military eyes. During the recent Air and Space Power Conference in the UK, the Royal Air Force announced it had selected Virgin Orbit as a partner in a project named ARTEMIS which intends, “to demonstrate the utility of small satellites and responsive launch to provide information to the RAF and allied personnel on operationally relevant timelines”. The UK Ministry of Defence has committed £30 million to fasttrack ARTEMIS, for which Virgin Orbit will launch satellites built and operated by other project team members. The first launch could happen as soon as late 2020, a statement said.

Virgin Orbit said: “To fully demonstrate the responsiveness newly available to the RAF, each of these launches will be conducted with short call-ups, with Virgin Orbit possibly receiving as little as a week’s notice prior to the desired take-off.” Royal Air Force Chief of Staff Capability, Air Vice Marshal Rocky Rochelle, said: “If a satellite in orbit can no longer perform its function, or if a new need emerges, we need to launch within days, if not hours. And it’s not sufficient to launch to just any orbit; we need to place the satellite into the orbit where it is needed. With commercially developed capabilities like what Virgin Orbit has done with air launch, this is now in the realm of possibility.” Pending US government approval, the Royal Air Force intends to send a pilot on secondment to Virgin Orbit to gain operational insights into how best to integrate Virgin Orbit capabilities into its planning and operations, with this pilot also ultimately flying missions on Cosmic Girl. 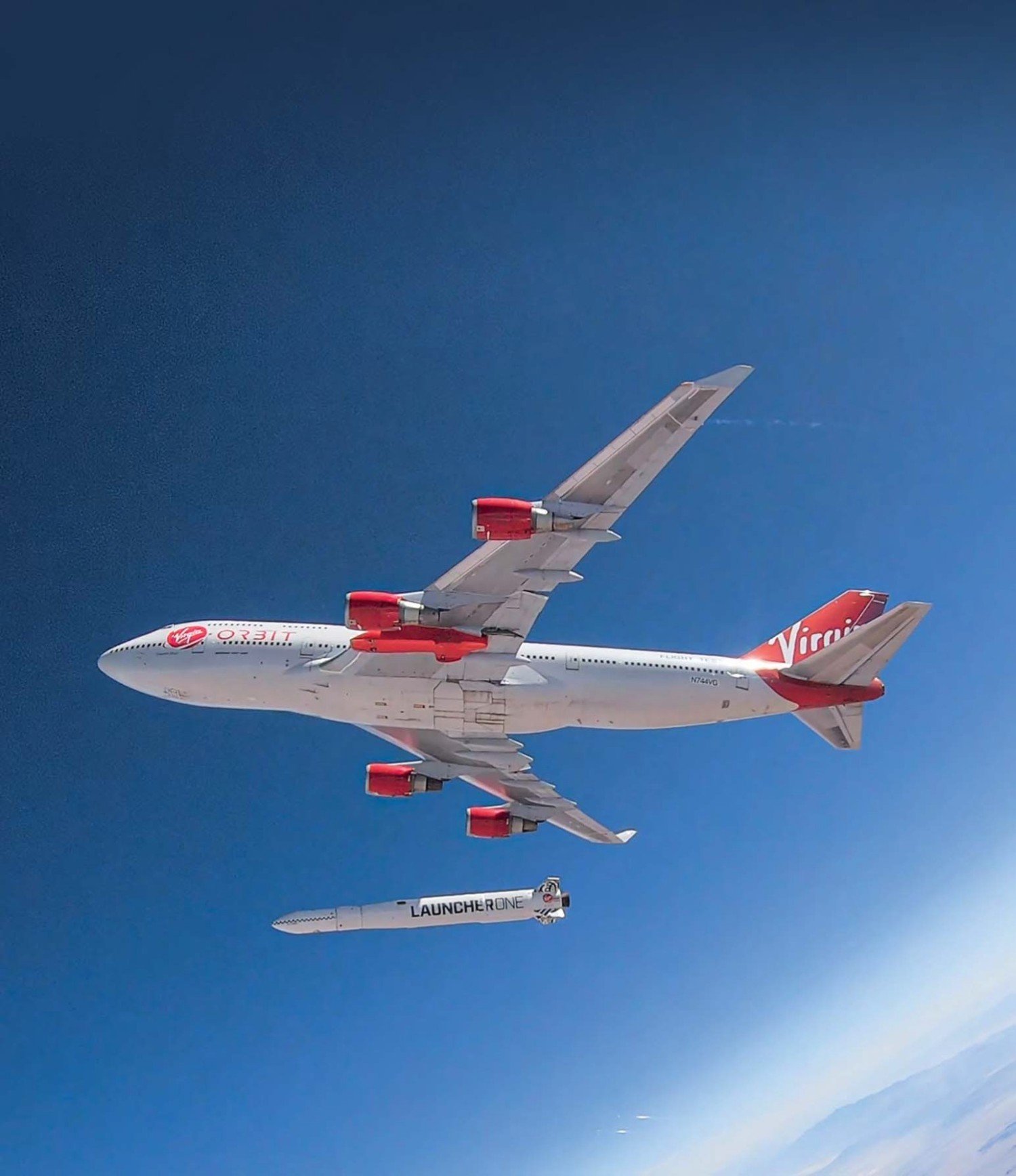 Boeing 747-400 N744VG (c/n 32745) Cosmic Girl drops an inert LauncherOne during the first drop test of the launch system above the Mojave Desert. All photos Virgin Orbit