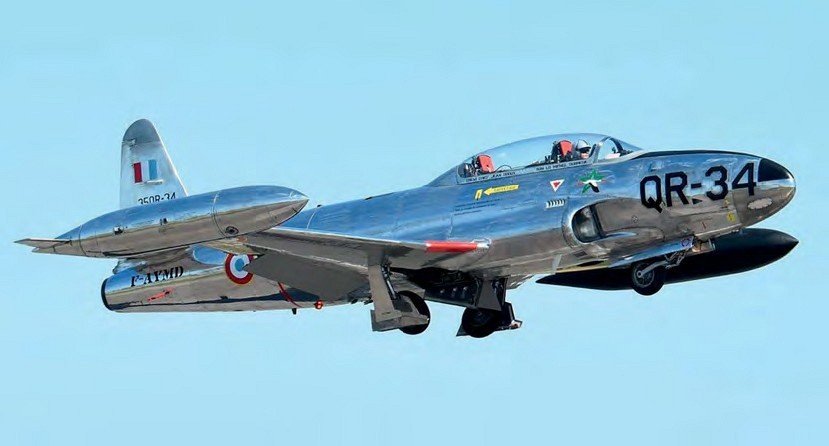 Owned by Top Gun Voltige, Canadair CT-133 Silver Star F-AYMD made its maiden post-restoration flight at La Roche-sur-Yon, western France, on 16 June. The aircraft had served with the Royal Canadian Air Force with serial RCAF 21263, later becoming 133263 when the ‘unified’

Canadian Forces changed their serial number system. During the early 2000s it was sold into civilian hands as N263KK and then C-FUPK, spending several years with the Jet Aircraft Museum in Ontario prior to its export to France.

Arriving at La Roche-sur-Yon in the summer of 2017, Top Gun Voltige set about returning the Canadian-built T-33 to flight on the French register. Both Lockheed and Canadairproduced T-33s served with the Armée de l’Air as advanced jet trainers from 1951-81, in excess of 200 — including a small number of RT-33 reconnaissance aircraft — being procured. F-AYMD has been finished in the markings of an early Armée de l’Air example, with codes QR-34 as depicted in the famed Franco- Belgian comic strip series Les Aventures de Tanguy et Laverdure about two Armée de l’Air pilots.

Among other bookings this year, the CT-133 is due to appear at the Paris-Villaroche Air Legend airshow at Melun-Villaroche on 7-8 September. With the return to flight of the Norwegian Air Force Historical Squadron’s Silver Star, now registered LN-DPS and set to feature at numerous British events, the type will be well represented at European airshows during 2019.