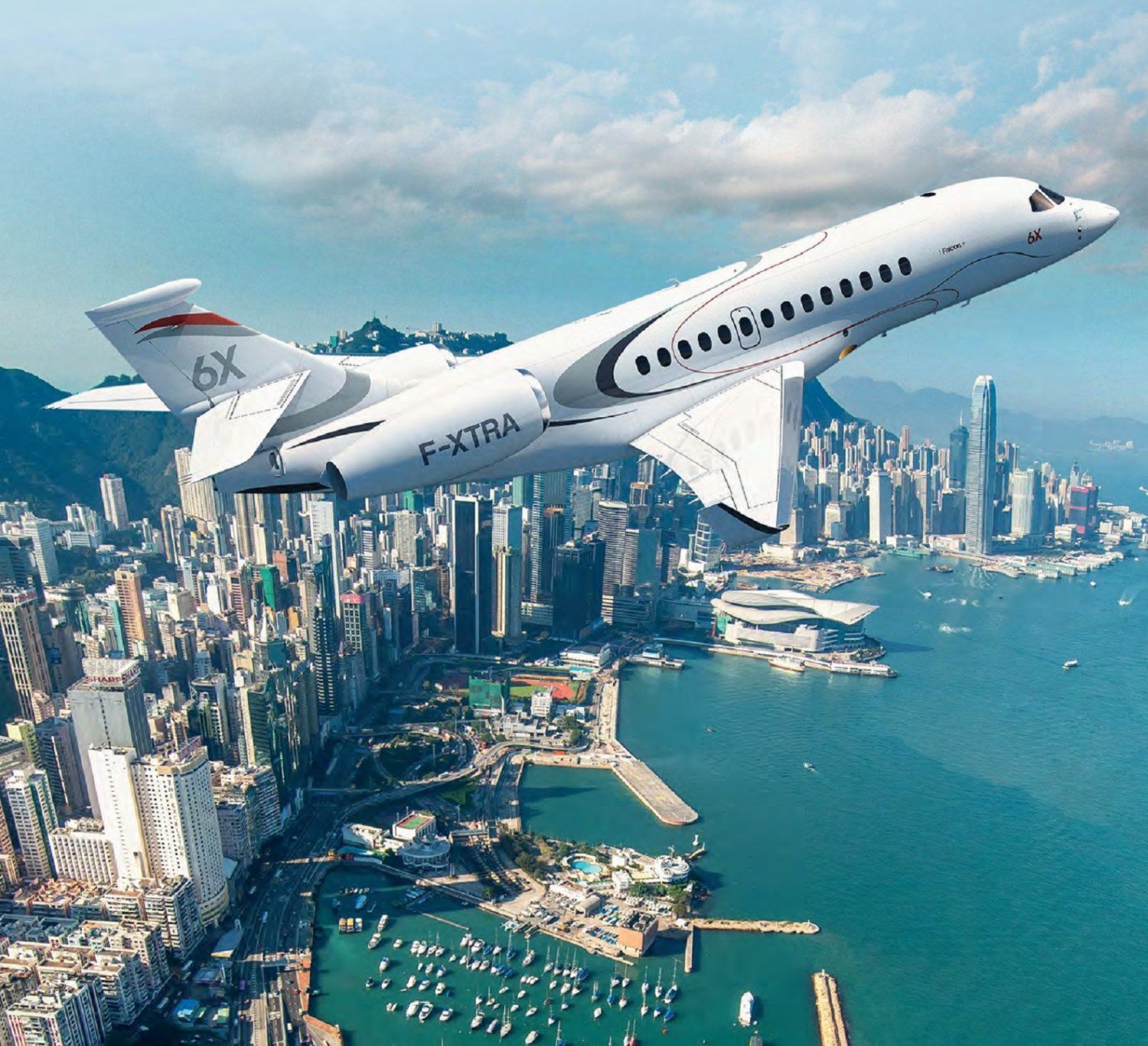 A 5,500 nautical miles range capability means the Falcon 6X will be able to fly direct from San Francisco to Beijing and from Hong Kong to London.
All photos Dassault Aviation

THERE IS a new addition to the long-running Dassault Falcon family: the 6X. Launched at Le Bourget late in February, the aircraft replaces the Falcon 5X in the company’s business jet portfolio after that model’s cancellation owing to development problems with its Snecma Silvercrest engines.

Dassault launched the cancelled 5X in 2013 to complement its 7X and 8X models. However, Safran encountered what Dassault later called “recurrent technical issues” that led to a three-year postponement in the 5X’s service entry from the initially-planned 2017 to 2020.

Equipped with a preliminary version of the Silvercrest, the Falcon 5X flew on July 5, 2017. Last autumn, however, issues emerged with the high-pressure compressor, which led Snecma to inform Dassault of an additional delay and a new performance shortfall.

Dassault said this made the 2020 service entry date “impossible”, so in December 2017 the company cancelled the 5X and began the termination process for the Silvercrest contract with Snecma.

However, on the 5X’s cancellation, Dassault Aviation Chief Executive Oficer Eric Trappier said: “There is still a strong market need for a brand-new long-range aircraft with a very large cabin.”

The company said it would launch a new product for the segment; the Falcon 6X is the result.

A Dassault Aviation spokesman told AIR International: “The range is a significant change from our customers’ standpoint and is key for city pairs from South America to North America, South America to Europe and both west-to-east and east-to-west from Asia. You will be able to fly direct from San Francisco to Beijing and from Hong Kong to London.”

Structurally, the 6X will be very similar the 5X. The spokesman said the wing “is the same aerodynamically”, although he said the internal structure and the empennage has been strengthened to cope with the higher MTOW.

Compared to the cancelled 5X, which Dassault’s figures said would offer 50.3m3 (1,770ft3) of cabin volume, the 6X will have 52.2m3 (1,845ft3) volume. The cabin will feature three separate lounge areas. A Dassault spokesman told AIR International: “The major impact for the market is the expanded cabin, which will offer much more volume and more flexibility.” 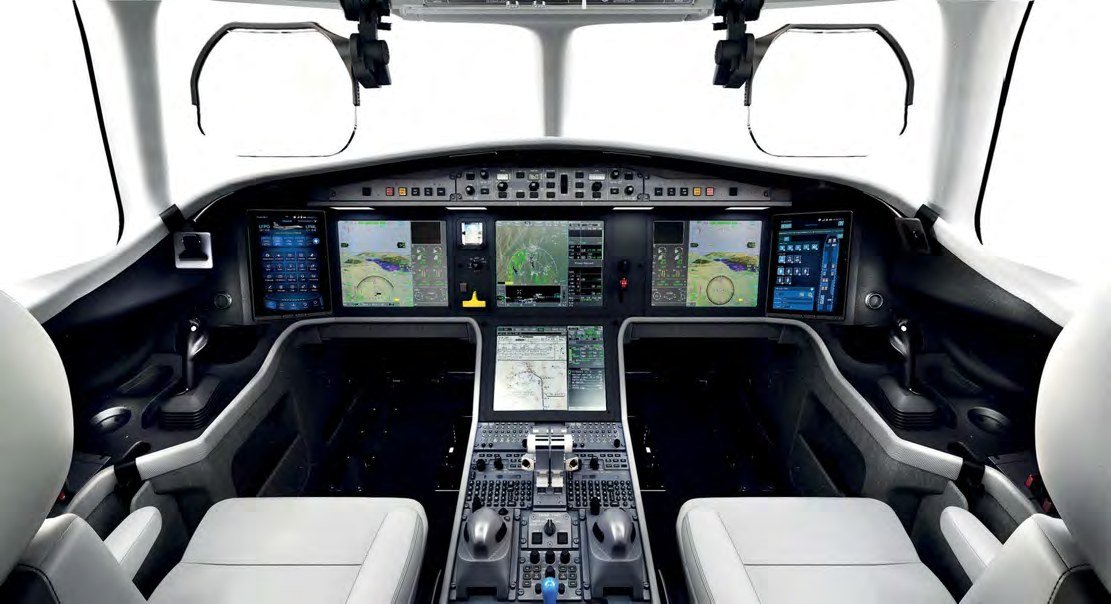 Attention was paid to create uninterrupted lines in the cabin and maximise natural light. There will be 28 windows and, in a business aviation first, a skylight in the galley. Options will include a larger entryway, a crew rest area and a rear lounge.

The 6X will have flaperons, highspeed deflection control surfaces located on the trailing edge between the ailerons and the flaps. As their name implies, flaperons combine both the lift/dragproducing effects of flaps and the roll control authority of ailerons.

Integrated with the DFCS, the flaperons are always active, which the spokesman said “brings more possibilities” in aircraft control. For example, during an approach to land, the flaperons will act as spoilers to increase drag and, because they operate differentially to the ailerons, they will enable the aircraft to maintain lift.

The spokesman said: “It helps the pilot to see more of the runway and have a better angle of approach and descent. Falcon aircraft have always been appreciated for their handling qualities and the flaperon will add even more control for the pilots.”

Flaperons are not new; Dassault previously designed them for the Rafale and the nEUROn unmanned combat air vehicle technology demonstrator and they also feature on Airbus and Boeing aircraft, but this will be their first application on a business jet. 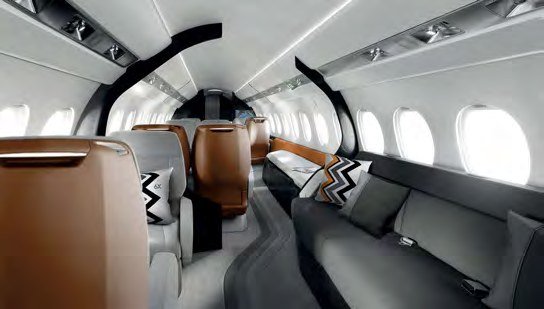 The Falcon 6X will have the widest, longest and tallest cabin of any business jet. 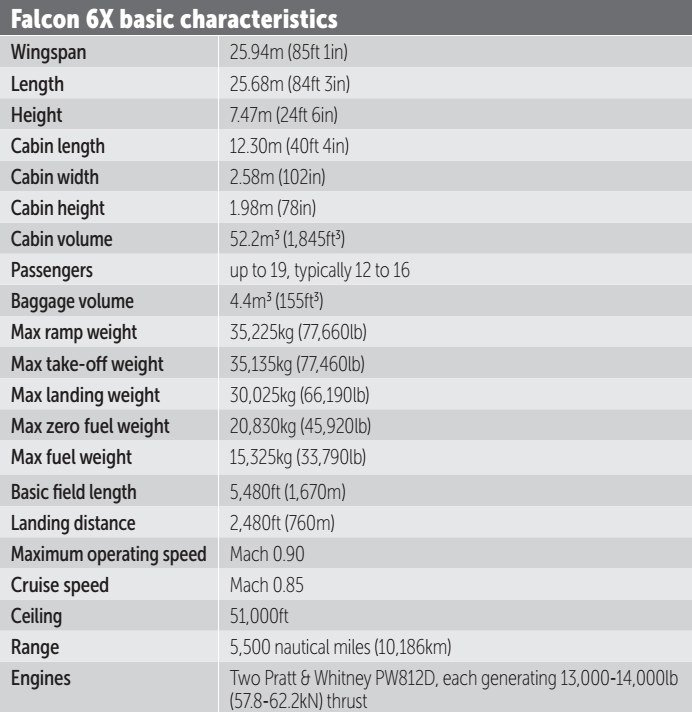 The spokesman said: “EVS and HUD are, of course, common, but FalconEye is the first to blend them. As a pilot, you will see the synthetic vision of your background and, in the foreground, a vision of the immediate environment brought by the infrared camera and sensor. The innovation is in the way the two images are combined in one single image.”

Dassault is planning for the Falcon 6X to conduct its first flight in 2021, with initial deliveries in 2022.