Sixty up for DH museum 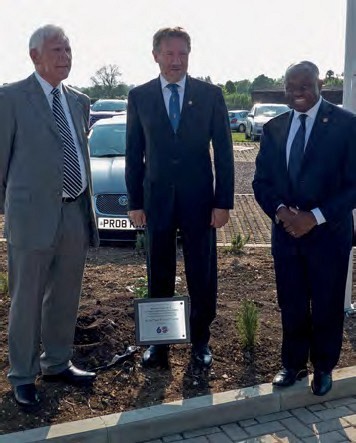 Chairman of trustees at the de Havilland Aviation Museum, Alan Brackley, the lord lieutenant of Hertfordshire, Robert Voss, and the deputy lieutenant Peter Warner by the new rose garden at Salisbury Hall. DHAM

On 15 May the de Havilland Aircraft Museum, Britain’s oldest aviation museum — which opened as the Mosquito Aircraft Museum in May 1959 — celebrated its 60th anniversary with a party at the Salisbury Hall site. The lord lieutenant of Hertfordshire led the celebrations, and planted the fi rst example of a new variety of rose named Geoffrey de Havilland in the newly created museum garden.

This year the museum is celebrating three anniversaries: its own 60th, the 80th anniversary of de Havilland moving in to Salisbury Hall, and the 35th anniversary of the May 1984 visit by the Queen Mother to open the main display hangar.

Of special interest to the 200 visitors was another hangar which is being constructed thanks to a grant of almost £1.9 million from the Heritage Lottery Fund. It is scheduled to be fi nished by the end of July, and following the closure of the museum for the winter in November 2019 several of the aircraft currently displayed outside will be moved in. It will be the last winter during which the museum will be closed: year-round opening will begin in 2020.

The original museum was the idea of a retired Royal Marines offi cer, Walter Goldsmith, who purchased Salisbury Hall in the 1950s. A series of coincidences led to him acquiring a small hangar which was erected in the grounds, and the taking on loan of the fi rst prototype Mosquito, W4050, in 1958. On 15 May 1959 Goldsmith opened what was then the only publicly accessible museum solely dedicated to aviation. Later acquisitions of other de Havilland aircraft led to the construction of another, larger building, named the Walter Goldsmith Hangar, which was offi cially opened in May 1984.

There are now more than 20 historic civil and military de Havilland aircraft types on display at Salisbury Hall. Among the exhibits due to go into the new hangar is the fuselage of ex-Air France Comet 1A F-BGNX.