AIRBUS IS working on a project to introduce passenger sleeping facilities into the lower decks of its aircraft.

The European company announced the concept at the recent Aircraft Interiors Expo (AIX) in Hamburg, where each year aircraft manufacturers and interiors suppliers show off their latest innovations.

Airbus and Zodiac Aerospace have partnered on a project to develop new lower-deck modules with passenger sleeping berths that fit inside airliners’ underfloor cargo compartments. The modules will be offered in the range of certified cabin options for Airbus widebody aircraft by 2020. The compartments will initially be offered on the A330, both for retrofit and line-fit, but Airbus said it was also studying the option for the A350. The project builds on the work Airbus and Zodiac have done together producing lower-deck crew rest facilities for Airbus aircraft.

Airbus said: “The modules offer new opportunities for additional services to passengers, improving their experience while enabling airlines to differentiate and add value for their commercial operations.

“The new passenger modules will be easily interchangeable with regular cargo containers during a typical turnaround if required. Moreover, the aircraft’s cargo floor and cargo loading system will not be affected at all, as the passenger module will sit directly on it.”

Zodiac Aerospace Cabin Branch Chief Executive Officer Christophe Bernardini said the compartments would offer “a key element of differentiation for airlines,” and Geoff Pinner, Head of Airbus Cabin and Cargo Programme, said: “This approach to commercial air travel is a step change. We have already received very positive feedback from several airlines on our first mock-ups.”

This wasn’t the only Airbus interiors development at AIX. A new A380 interior layout option called Cabin-Flex was unveiled. The layout offers up to 11 more premium economy or seven more business class seats. Qantas is the launch customer; its A380s will start to be retrofitted with Cabin- Flex from Q2 2019.

Airbus also showed a mockup of its A320 Airspace interior, which features new lighting effects, fully lie-flat business class seats, enlarged stowage bins and a lavatory. The manufacturer announced last summer it would offer Airspace for the A320; JetBlue will be the launch operator in 2020. Airspace debuted on the A350 and will launch on the A330neo later this year when the re-engined widebody enters service with TAP Portugal.

Turboprop manufacturer ATR announced Gabon-based Afrijet as launch customer of Cabinstream, a new wireless in-flight entertainment and connectivity (IFE&C) solution for its turboprops designed to let passengers access multimedia content on their personal devices. Cabinstream is an option for all new ATRs and retrofittable to existing aircraft, with the manufacturer emphasising it offers “a simple box solution that is easy to install”. Afrijet will introduce it on its ATRs before the end of this year.

AIX is obviously a major shop window for the numerous companies that make up the extensive ecosystem of interiors suppliers. (This year’s event featured 600 exhibitors.) Many of these specialists made big announcements during the show.

There were numerous other announcements related to cabin hardware and systems. Cwmbranbased cabin lighting specialists STG Aerospace announced Alaska Airlines is to retrofit its next-generation saf-Tglo SSUL photoluminescent emergency escape path marking system to its 116 aircraft. STG Aerospace also presented a new LED lighting system for Airbus called liTeMood, unveiled Icelandair as a customer for switchable wi-fisigns for its Boeing 757s and announced it will reconfigure the cabins of Air Canada A330-300s to harmonise them with the carrier’s 787s.

The range of announcements about cabin hardware, seating and IFE&C systems during AIX showed the area of interiors, and airlines’ appetite to reconfigure and update them, is a key aspect of the commercial aircraft industry. Mark Broadbent 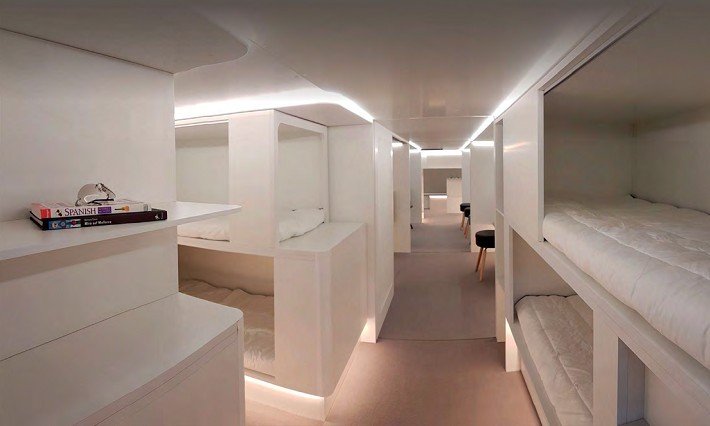 Airbus and Zodiac Aerospace are working on a project to develop new lower-deck modules with passenger sleeping berths to fit inside airliners’ underfloor cargo compartments.
Airbus